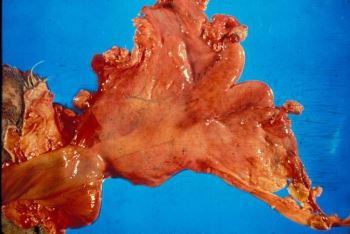 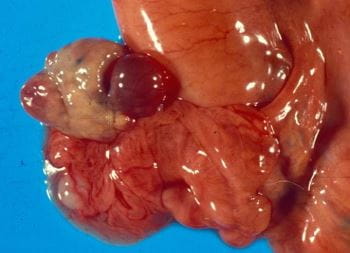 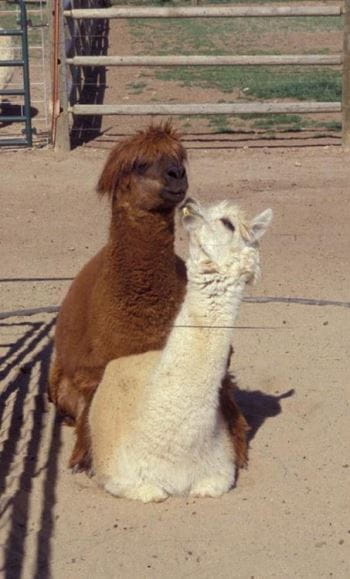 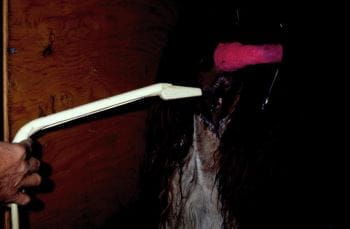 Some Reproductive Parameters of Male Llamas and Alpacas

Relative to body size, the nonpregnant reproductive tract of camelids is relatively small. Uterine morphology is similar to that of a mare, with relatively short horns and uterine body. The cervix can be felt on rectal palpation and has two or three cartilagenous rings. The urethra opens onto the floor of the vagina. A suburethral diverticulum is present.

Ovarian activity typically begins at 10–12 months old. Camelids are induced ovulators and seasonal breeders, although camelids living outside of their natural species range may breed year-round. At the onset of puberty, follicular waves occur, with a dominant follicle developing every 12–14 days. Because of the small size of females and the potential for dystocia associated with early breeding, females are usually not bred until they are >24 months old and weigh 40 kg (alpaca) or 90 kg (llama).

When a female is truly receptive, it will usually assume a position of sternal recumbency (kushing) within seconds to a few minutes after introduction of a male and allow the male to breed. While mounting, the male will typically begin a vocalization described as orgling. Mating can take up to 45 minutes, and ejaculation occurs over an extended period of time. The volume of the ejaculate is relatively small (2–5 mL) and is mostly deposited directly into the body of the uterus after cervical dilation.

An ovulation induction factor in the semen stimulates reflex ovulation ~24–30 hours after mating. A functional corpus luteum (CL) is present 2–3 days after ovulation. The fertilized oocyte is usually found in the uterus by day 7 after mating, with implantation occurring by ~30 days of gestation. The type of placentation is diffuse epitheliochorial, developing in both horns. Although ovulation occurs from either ovary, uniquely, ~95% or more of the pregnancies are carried in the left horn. Live births of twins are extremely uncommon, with most twin pregnancies being resorbed or aborted early in gestation.

A female with a functional CL will aggressively refuse the male’s efforts to mount. An indication of pregnancy is the female’s rejection of the male if reintroduced >15 days after the initial breeding. Progesterone concentrations >1 ng/mL are typical in females with a functional CL and can be used for confirmation of both ovulation at 6–9 days after mating and of pregnancy at >21 days after mating. Persistent CL are periodically seen and account for most false-positive results when using serum progesterone for pregnancy confirmation.

Rectal palpation for pregnancy diagnosis is practical in llamas at >45 days of gestation. It is usually not possible to safely perform rectal palpation in alpacas, unless the palpator is experienced and has small hands. Pregnancy can also be diagnosed by transrectal ultrasound from approximately 28 days of gestation, although the finding of fluid by 10–12 days after mating can raise suspicion, and diagnosis is reasonably sure by day 21 when a hyperechoic “embryo” is seen. Transcutaneous ultrasonography Ultrasonography in Animals Ultrasonography is the second most commonly used imaging format in veterinary practice. It uses ultrasonic sound waves in the frequency range of 1.5–15 megahertz (MHz) to create images of body... read more can confirm pregnancy starting 45 to 60 days after conception.

Normal gestation period in camelids is ~342 ± 10 days, with alpacas having a somewhat shorter gestation. Most normal births (>70%) occur in the morning. Dystocias are uncommon. Few reliable indications of pending delivery exist, but labor occurs in three stages. Stage I labor typically lasts 1–6 hours and may be accompanied by increased frequency of urination, increased humming, and separation from the herd. This stage can go unrecognized. Stage II labor is rapid (typically <30 minutes), ending with the delivery of a cria weighing 5.5–8 kg (alpaca) or 11–16 kg (llama). Stage III labor involves passage of the placenta and should be complete within 4–6 hours. All stages are usually longer in a primiparous dam. Retained placentas are rare. Uterine involution begins shortly after birth, and most females can conceive within 14–21 days after delivery. Females have four teats and do not exhibit notable mammary enlargement before parturition. Mastitis is rare. See table: Various Reproductive Parameters of Female Llamas and Alpacas Various Reproductive Parameters of Female Llamas and Alpacas Relative to body size, the nonpregnant reproductive tract of camelids is relatively small. Uterine morphology is similar to that of a mare, with relatively short horns and uterine body. The... read more

In male llamas and alpacas, both testicles should be fully descended at birth. Testes should be at least 2 × 4 cm and 3 × 6 cm in mature alpacas and llamas, respectively. Relative to body size, the testes are smaller than those of many other domestic livestock species and are held close to the body wall. The urethra is relatively small and contains a urethral diverticulum at the level of the ischial arch, making retrograde catheterization difficult to impossible. The prepuce points backward, accounting for the rear-directed urination, and the forward-pointing penis is fibrous, with a sigmoid flexure. A cartilaginous process is present at the tip of the penis, and the urethra opens 1–2 cm back from the tip. Urinary calculi are relatively uncommon and have a poor prognosis because of the small urethral diameter (3.5–5F) and the diverticulum.

Although androgen production may begin earlier than 8 months of age, and some sperm can be collected by vaginal retrieval as early as 14 months of age, normal preputial adhesions (also known as the frenulum) prevent full penile extension and copulation until ≥18–24 months of age. Most males enter breeding programs when 18–24 months old, and become fertile by 30 months old. Sexual maturity can be later in alpacas than in llamas. See table: Some Reproductive Parameters of Male Llamas and Alpacas Some Reproductive Parameters of Male Llamas and Alpacas Relative to body size, the nonpregnant reproductive tract of camelids is relatively small. Uterine morphology is similar to that of a mare, with relatively short horns and uterine body. The... read more

Camelids are dribble ejaculators. Semen evaluation is difficult in camelids because of the small total volume of semen and the dribble ejaculation. Although males can be trained to mount a phantom or dummy equipped with an artificial vagina, semen collection usually requires heavy sedation or anesthesia and electroejaculation. Semen collection, even from males of known fertility, is inconsistent. The most reliable semen evaluation is afforded by postbreeding retrieval from the vagina of a receptive dam.

Fertility problems are relatively common in llamas and alpacas. Although most problems primarily involve females, problems with males include hypoplastic testes, penile injuries, and heat stress, which is characterized by scrotal edema, decreased activity, and reluctance to breed. After heat stress, fertility can be permanently impaired or reduced for several weeks. Shearing, adequate shade, and sufficient water help prevent the problem. When working with inexperienced males, vaginal intromission should be visually confirmed.

Because of the relatively high incidence of congenital anomalies, anatomic problems must be considered as causes of infertility in nulliparous animals. In multiparous animals, vaginal strictures, uterine infections, and cervical damage are also relatively common. Complete uterine strictures are possible sequelae of dystocia. The diagnostic approach to all these conditions is similar to that used in mares, except that rectal palpation cannot usually be safely done in alpacas without sedation and only by experienced clinicians with small hands and copious lubrication.

If uterine biopsies or cultures are appropriate, they should be performed when the dam has a dominant follicle, which relaxes the cervix. Rupture of a mature follicle (>7 mm) can reliably be induced with human chorionic gonadotropin (hCG) or gonadotropin-releasing hormone (GnRH). Increased progesterone concentration (>1 ng/mL) 7 days after copulation or hormonal treatment is indicative of CL formation. Although persistent CL have been identified, they are relatively rare. Prostaglandin treatment will result in regression of a persistent CL and abortion throughout gestation. Induction of parturition with prostaglandins or glucocorticoids is contraindicated and may result in rapid death, especially at high doses and when administered by other than the subcutaneous route.

Overview of Llamas and Alpacas

Overview of Antiseptics and Disinfectants

Overview of Pain Assessment and Management