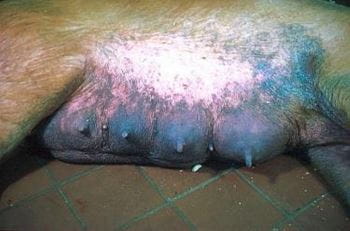 The etiology is multifactorial. Infections of the mammary gland are more often secondary, and many microorganisms have been identified, including Escherichia coli, Klebsiella spp, Enterobacter spp, Citrobacter spp, Staphylococcus spp (eg, S epidermidis), and Pseudomonas aeruginosa. All these microorganisms are common in the environment of sows.

Although many sows in a herd may be severely affected, this type of mastitis is not contagious. After farrowing, the mammary gland is infected by environmental opportunist bacteria. Very few bacteria (often <100 organisms) are enough to colonize the mammary gland.

Some genetic lines of females are more resistant to coliform mastitis than others. The heritability of this characteristic is believed to be ~10%. Selection among the gilts to minimize or eliminate mastitis-prone sows can provide longterm improvement of the herd.

Systemic signs such as anorexia, constipation, fever, and depression are common. Local signs include acute induration of the mammary glands as well as severe edema and skin congestion of the mammary region. However, many sows (especially primiparous sows) develop mammary edema without any signs of acute mastitis. Circumstantial evidence suggests that this is usually associated with increasing milk production (often the milk drips during and right after farrowing) to such an extent that piglets are unable to consume all the available milk.

Once acute multiglandular mastitis is established, the secretion (with oxytocin) of milk is no longer possible. Affected sows deny piglets access to the teats by lying on their mammary glands. General signs result from bacterial multiplication and resorption of toxins. Common consequences for the litter include an economically significant increase in preweaning mortality caused by weak piglets, neonatal diarrhea, starvation, hypoglycemia-induced weakness, an increased incidence of crushing by the sow, and increased susceptibility to other diseases due to inadequate maternal immunoglobulin transfer and other problems (eg, runt pigs).

Early diagnosis is not always easy. Most problem litters are thought to be due to early lactation problems. The primary differential diagnoses are peripartum mammary edema, which is often seen in primiparous sows without any systemic signs, and PPDS, which is less spectacular but affects a greater number of sows. A thorough physical examination, including careful palpation of the mammary glands, should be performed. However, it is necessary to be cautious in the interpretation—hard mammary glands without systemic signs do not always indicate acute mastitis. Although frequently seen, peripartum mammary edema is poorly documented. Sows often appear to be in discomfort and lay down, as do sows with mastitis. However, peripartum mammary edema can certainly lead to an acute multiglandular mastitis. In contrast to the situation in cows, interpretation of cellular modifications in the milk is very difficult in sows.

Systemic antibiotic therapy should be started as soon as possible (see Postpartum Dysgalactia Syndrome in Sows Postpartum Dysgalactia Syndrome in Sows Postpartum dysgalactia syndrome (PPDS) is a primary cause of neonatal problems (eg, diarrhea, crushing, runting, inanition, poor growth) but is challenging to characterize because of its multiple... read more ). Longterm control of a herd problem also requires identification and correction of risk factors. General antibiotic therapy as well as corticosteroids are useful to reduce the intensity of the inflammatory reaction. Meloxicam has also been shown to improve recovery of the sows. Management techniques to improve hygiene should be implemented as soon as possible. Cross-fostering is often the only effective way to save a litter.

Overview of Postpartum Dysgalactia Syndrome and Mastitis in Sows