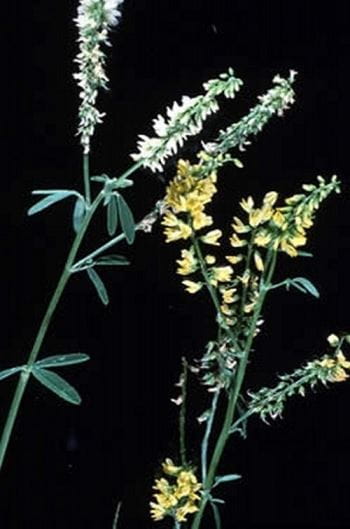 In the 1920s, cattle in North America developed a fatal hemorrhagic disease. Various causes, including pathogenic organisms and nutritional deficiencies, were investigated. Damp conditions caused stacks of hay to mold and spoil. Within several weeks, sheep and cattle eating the hay developed uncontrollable hemorrhages that were generally fatal in 30–50 days. Feeding trials and chemical analyses later definitively identified the cause as spoiled or moldy sweet clover (Melilotus officinalis and M alba) hay or silage.

During the process of spoiling, the coumarins in sweet clover are converted to toxic dicumarol, a potent vitamin K antagonist and anticoagulant. Any method of hay storage that allows molding of sweet clover promotes the likelihood of formation of dicumarol in the hay. Weathered, large round bales, particularly the outer portions, usually contain the highest concentrations of dicumarol. When toxic hay or silage is consumed for several weeks, dicumarol alters proenzymes required for synthesis of prothrombin, resulting in hypoprothrombinemia (by preventing formation of the active enzyme). It probably also interferes with synthesis of factor VII and other vitamin K–dependent coagulation factors Hemostatic Disorders read more . Dicumarol concentrations of 20–30 mg/kg of hay ingested throughout several weeks are usually required to cause poisoning in cattle. The toxic agent crosses the placenta in pregnant animals, and newborn animals may be affected at birth. All species of animals studied are susceptible, but instances of poisoning involve cattle and, to a limited extent, sheep, pigs, and horses.

Clinical signs of sweet clover poisoning are related to hemorrhages that result from faulty blood coagulation. The time between consumption of toxic sweet clover and appearance of clinical disease varies greatly and depends on the dose (dicumarol concentrations of the sweet clover variety and amount eaten), duration of exposure, and age of the animals. If the dicumarol content of the ration is low or variable, animals may consume it for months before signs of disease develop.

Because dermal pigmentation and hair can obscure small hemorrhages, the first indication of dicumarol poisoning is often death of one or more animals. However, with closer observation, poisoned animals may be stiff or lame due to bleeding into the muscles and joints. Hematomas, epistaxis, or GI bleeding may also be seen. Death is generally caused by massive hemorrhage or bleeding after injury, surgery, or parturition. Neonatal deaths rarely occur without signs in the dam.

Because sweet clover poisoning occurs with continuous consumption of sweet clover hay or silage over relatively long periods, diagnosis is made by identifying compatible signs and lesions and by documenting prolonged blood clotting times and reduced plasma prothrombin concentrations. The nature of the coagulopathy can be confirmed in the laboratory when the prothrombin time (PT) is prolonged. Sweet clover poisoning is normally a herd problem affecting numerous animals, which contrasts sharply with diseases that affect individual animals, such as blackleg Blackleg in Animals Blackleg is an acute, highly fatal disease of cattle and sheep caused by Clostridium chauvoei. In cattle, characteristic lesions of emphysematous swelling of the musculature often develop without... read more

, and aplastic anemia Anemia in Animals Anemia is an absolute decrease in RBC numbers, hemoglobin concentration, or PCV. Signs include pale mucous membranes, increased heart rate, and hypotension. Diagnosis can be made by CBC, but... read more

Rodenticide poisoning Rodenticide Poisoning read more would be a likely alternative differential diagnosis for hemorrhagic disease involving many animals. These would have to be differentiated by examining feed and potential exposures. Congenital or inherited diseases affecting coagulation factors or blood platelets (eg, hemophilia A) may produce similar hemorrhagic disease, but with an obviously inherited morbidity.

The hypoprothrombinemia, hemorrhages, and anemia due to sweet clover poisoning can be immediately corrected, to a degree, by IV administration of whole blood. This may be difficult in large animals because effective doses are from 2–10 L of fresh blood per 1,000 lb (450 kg) body weight. Care should be taken to ensure that donor animals are not receiving sweet clover feed. All clinically affected animals should receive a transfusion, which can be repeated if necessary. In addition, all severely affected animals should receive parenteral administration of synthetic vitamin K1 (phytonadione). SC or IM injection is recommended to avoid the substantial risk of anaphylaxis; SC vitamin K1 may not be as effective as IM treatment. The usual dosage recommended for cattle is 1 mg/kg, 2 or 3 times a day for 2 days. Although it is more costly, vitamin K1 is more effective than K3 (menadione). Because reversal of dicumarol poisoning by vitamin K1 requires synthesis of coagulation proteins, significant improvement in homeostasis requires several hours, and >24 hours is required to completely restore coagulation. In most cases, either vitamin K1 or a blood transfusion is sufficient to correct mild cases if additional exposure is stopped.

Cultivars of sweet clover low in coumarin and safe to feed (eg, Polara) have been developed. If one of these is not available, the only certain method of prevention of sweet clover poisoning is to avoid feeding sweet clover hay or silage. Although well-cured sweet clover is not dangerous, the absence of visible spoilage is insufficient evidence of safety.

Alternating sweet clover hay suspected of containing dicumarol with other roughage such as alfalfa or a grass-legume hay mixture can be used to avoid severe poisoning. A 7- to 10-day period on the sweet clover hay, followed by an equal time on the alternative hay, can prevent poisoning but it will not completely prevent prolonged bleeding times. Because some animals have higher risks of serious hemorrhage (surgical candidates or pending parturition), they should not receive sweet clover hay for a minimum of 2–3 weeks, and preferably ≥4 weeks or more before surgery or parturition.