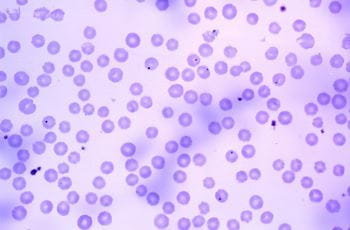 Anaplasmosis, formerly known as gall sickness, traditionally refers to a disease of ruminants caused by obligate intraerythrocytic bacteria of the order Rickettsiales, family Anaplasmataceae, genus Anaplasma. Cattle, sheep, goats, buffalo, and some wild ruminants can be infected with the erythrocytic Anaplasma. Anaplasmosis occurs in tropical and subtropical regions worldwide (~40°N to 32°S), including South and Central America, the USA, southern Europe, Africa, Asia, and Australia.

The Anaplasma genus also includes A phagocytophilum (compiled from species previously known as Ehrlichia phagocytophila, E equi, and human granulocytic ehrlichiosis agent, see Ehrlichiosis, Anaplasmosis, and Related Infectionsin Animals Ehrlichiosis, Anaplasmosis, and Related Infectionsin Animals Ehrlichiosis is a tick-transmitted disease that infects blood cells and can cause a variety of signs from none to fever and generalized achiness to possible fatality. Several species of bacteria... read more ), A bovis (formerly E bovis), and A platys (formerly E platys), all of which invade blood cells other than erythrocytes of their respective mammalian hosts. Bovine anaplasmosis is of economic significance in the cattle industry.

Clinical bovine anaplasmosis is usually caused by A marginale. An A marginale with an appendage has been called A caudatum, but it is not considered to be a separate species. Cattle are also infected with A centrale, which generally results in mild disease. A ovis may cause mild to severe disease in sheep, deer, and goats. A phagocytophilum has recently been reported to infect cattle; however, natural infection is rare and it does not cause clinical disease.

Up to 17 different tick vector species (including Dermacentor, Rhipicephalus, Ixodes, Hyalomma, and Argas) have been reported to transmit Anaplasma spp. Not all of these are likely significant vectors in the field, and it has been shown that strains of A marginale also coevolve with particular tick strains. Rhipicephalus (Boophilus) spp are major vectors in Australia and Africa, and Dermacentor spp have been incriminated as the main vectors in the USA. After feeding on an infected animal, intrastadial or trans-stadial transmission may occur. Transovarial transmission may also occur, although this is rare, even in the single-host Rhipicephalus spp. A replicative cycle occurs in the infected tick. Mechanical transmission via biting dipterans occurs in some regions. Transplacental transmission has been reported and is usually associated with acute infection of the dam in the second or third trimester of gestation. Anaplasmosis may also be spread through the use of contaminated needles or dehorning or other surgical instruments.

There is a strong correlation between age of cattle and severity of disease. Calves are much more resistant to disease (although not infection) than older cattle. This resistance is not due to colostral antibody from immune dams. In endemic areas where cattle first become infected with A marginale early in life, losses due to anaplasmosis are minimal. After recovery from the acute phase of infection, cattle remain chronically infected carriers but are generally immune to further clinical disease. However, these chronically infected cattle may relapse to anaplasmosis when immunosuppressed (eg, by corticosteroids), when infected with other pathogens, or after splenectomy. Carriers serve as a reservoir for further transmission. Serious losses occur when mature cattle with no previous exposure are moved into endemic areas or under endemically unstable situations when transmission rates are insufficient to ensure that all cattle are infected before reaching the more susceptible adult age.

In animals <1 yr old anaplasmosis is usually subclinical, in yearlings and 2-yr-olds it is moderately severe, and in older cattle it is severe and often fatal. Anaplasmosis is characterized by progressive anemia due to extravascular destruction of infected and uninfected erythrocytes. The prepatent period of A marginale is directly related to the infective dose and typically ranges from 15–36 days (although it may be as long as 100 days). After the prepatent period, peracute (most severe but rare), acute, or chronic anaplasmosis may follow. Rickettsemia approximately doubles every 24 hr during the exponential growth phase. Generally, 10%–30% of erythrocytes are infected at peak rickettsemia, although this figure may be as high as 65%. RBC count, PCV, and hemoglobin values are all severely reduced. Macrocytic anemia with circulating reticulocytes may be present late in the disease.

Animals with peracute infections succumb within a few hours of the onset of clinical signs. Acutely infected animals lose condition rapidly. Milk production falls. Inappetence, loss of coordination, breathlessness when exerted, and a rapid bounding pulse are usually evident in the late stages. The urine may be brown but, in contrast to babesiosis, hemoglobinuria does not occur. A transient febrile response, with the body temperature rarely exceeding 106°F (41°C) occurs at about the time of peak rickettsemia. Mucous membranes appear pale and then yellow. Pregnant cows may abort. Surviving cattle convalesce over several weeks, during which hematologic parameters gradually return to normal.

Bos indicus breeds of cattle appear to possess a greater resistance to A marginale infection than B taurus breeds, but variation of resistance of individuals within breeds of both species occurs. Differences in virulence between Anaplasma strains and the level and duration of the rickettsemia also play a role in severity of clinical manifestations.

Lesions are typical of those found in animals with anemia due to erythrophagocytosis. The carcasses of cattle that die from anaplasmosis are generally markedly anemic and jaundiced. Blood is thin and watery. The spleen is characteristically enlarged and soft, with prominent follicles. The liver may be mottled and yellow-orange. The gallbladder is often distended and contains thick brown or green bile. Hepatic and mediastinal lymph nodes appear brown. There are serous effusions in body cavities, pulmonary edema, petechial hemorrhages in the epi- and endocardium, and often evidence of severe GI stasis. Widespread phagocytosis of erythrocytes is evident on microscopic examination of the reticuloendothelial organs. A significant proportion of erythrocytes are usually found to be parasitized after death due to acute infection.

A marginale, together with the hemoprotozoa Babesia bovis and B bigemina, are the causative agents of tick fever in cattle. These three species have similar geographic distributions, except that anaplasmosis occurs in the absence of babesiosis in the USA. Microscopic examination of Giemsa-stained thin and thick blood films is critical to distinguish anaplasmosis from babesiosis (see Babesiosis Babesiosis Babesiosis is caused by intraerythrocytic protozoan parasites of the genus Babesia. Transmitted by ticks, babesiosis affects a wide range of domestic and wild animals and occasionally people... read more

) and other conditions that result in anemia and jaundice, such as leptospirosis (see Leptospirosis Leptospirosis read more ) and theileriosis (see Theileriases Theileriases Theileriases are a group of tickborne diseases caused by Theileria spp. A large number of Theileria spp are found in domestic and wild animals in tick-infested areas of the Old World. The most... read more ). Blood in anticoagulant should also be obtained for hematologic testing. In Giemsa-stained thin blood films, Anaplasma spp appear as dense, homogeneously staining blue-purple inclusions 0.3–1 μm in diameter. A marginale inclusions are usually located toward the margin of the infected erythrocyte, whereas A centrale inclusion bodies are located more centrally. A caudatum cannot be distinguished from A marginale using Giemsa-stained blood films. Special staining techniques are used to identify this species based on observation of characteristic appendages associated with the bacteria. A caudatum has been reported only in North America and could possibly be a morphologic form of A marginale and not a separate species. Inclusion bodies contain 1–8 initial bodies 0.3–0.4 μm in diameter, which are the individual rickettsiae. The percentage of infected erythrocytes varies with the stage and severity of disease; maximum rickettsemias in excess of 50% can occur with A marginale. Microscopically, the infection becomes visible 2–6 wk after transmission. During the course of infection, the rickettsemia can double each day for up to 10 days and then decreases. Severe anemia can persist for weeks after parasites cannot be detected in blood smears.

Chronically infected carriers may be identified with a fair degree of accuracy by serologic testing using the msp5 ELISA, complement fixation, or card agglutination tests. Nucleic acid–based detection methods are most useful, because species and strain differentiation tests may not detect carrier levels.

At necropsy, thin blood films of liver, kidney, spleen, lungs, and peripheral blood should be prepared for microscopic examination.

Tetracycline antibiotics and imidocarb are currently used for treatment. Cattle may be sterilized by treatment with these drugs and remain immune to severe anaplasmosis subsequently for at least 8 mo.

Imidocarb is also highly efficacious against A marginale as a single injection (as the dihydrochloride salt at 1.5 mg/kg, SC, or as imidocarb dipropionate at 3 mg/kg). Elimination of the carrier state requires the use of higher repeated doses of imidocarb (eg, 5 mg/kg, IM or SC, two injections of the dihydrochloride salt 2 wk apart). Imidocarb is a suspected carcinogen with long withholding periods and is not approved for use in the USA or Europe.

In South Africa, Australia, Israel, and South America, infection with live A centrale (originating from South Africa) is used as a vaccine to provide cattle with partial protection against the disease caused by A marginale. A centrale (single dose) vaccine produces severe reactions in a small proportion of cattle. In the USA, where live vaccines cannot be used, vaccines comprising nonliving A marginale purified from infected bovine erythrocytes and adjuvant have been used in the past but may not currently be available. Immunity generated by using multidose killed vaccine protects cattle from severe disease on subsequent infection, but cattle can still be susceptible to challenge with heterologous strains of A marginale. Instances of isoerythrolysis in suckling calves have occurred due to prior vaccination of dams with preparations that contained bovine erythrocytic material. Long-lasting immunity against A marginale is conferred by preimmunization with live rickettsia, combined with the use of chemotherapy to control severe reactions. The use of attenuated strains of A marginale as a live vaccine has been reported, with instances of severe reactions also occurring. A marginale grown in tick cell cultures are being investigated as an alternative live vaccine source. Subunit vaccines to control bovine anaplasmosis are also under investigation. In some areas, sustained stringent control or elimination of the arthropod vectors may be a viable control strategy; however, in other areas immunization is recommended.