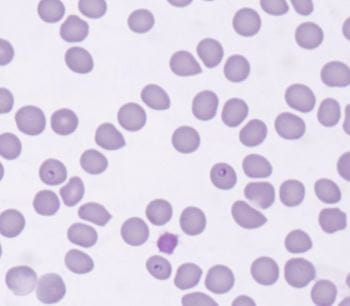 Cytauxzoonosis is an emerging, life-threatening infectious disease of domestic cats (Felis catus) caused by the tick-transmitted protozoan parasite Cytauxzoon felis. Cytauxzoon spp are apicomplexan parasites within the family Theileriidae along with their closest relatives of Theileria spp. C felis is transmitted to domestic cats by the lone star tick (Amblyomma americanum). The natural host for C felis is the bobcat (Lynx rufus); reservoir hosts of the parasite include bobcats and domestic cats that survive infection.

Since the discovery of feline cytauxzoonosis in Missouri in the mid-1970s, the distribution of C felis has been expanding. C felis has been reported in domestic cats in Missouri, Arkansas, Florida, Georgia, Louisiana, Mississippi, Oklahoma, Texas, Kentucky, Kansas, Tennessee, North Carolina, South Carolina, Nebraska, Iowa, and Virginia. Anecdotal reports of C felis infection in domestic cats in additional states include Alabama, southern Illinois, and Ohio.

The domestic cat has been considered an aberrant or dead-end host of C felis given the acute and fatal course of disease; however, there are reports of domestic cats surviving natural infection with and without treatment. As a natural host, the bobcat typically experiences subclinical infection, followed by a chronic parasitemia. Rare cases of fatal cytauxzoonosis in bobcats have been reported. Cytauxzoonosis has been reported in several other wild felids in the USA and other countries, with both fatal and nonfatal outcomes. Infection has been reported in cougars, panthers, and tigers in the USA, in addition to two suspected but unconfirmed cases in cheetahs. C felis infections of wild felids reported in other countries include lions, jaguars, pumas, ocelots, and little spotted cats. In the early 1980s, interspecies transmission of C felis was investigated to identify additional potential natural and aberrant hosts among 91 wildlife, laboratory, and domestic farm animals. Bobcats and domestic cats were the only animals confirmed to be susceptible to C felis.

C felis is transmitted by the lone star tick, A americanum. Cytauxzoonosis is typically diagnosed during April through September, which correlates with climate-dependent seasonal tick activity. Cats living near heavily wooded, low-density residential areas particularly close to natural or unmanaged habitats where both ticks and bobcats may be in close proximity are at highest risk of infection. Experimental infections have been induced with parenteral injection of tissue homogenates (SC, IP, and IV) from acutely infected cats. However, infection was not induced when these tissues were administered intragastrically or when noninfected cats were housed together with infected cats in the absence of arthropod vectors, suggesting that oral and "cat-to-cat" transmission does not occur. One recent study failed to document perinatal transmission of C felis from 2 chronically infected dams to 14 healthy kittens, suggesting that vertical transmission may not occur commonly, if at all.

After transmission from the tick into the cat, C felis undergoes two major stages: schizogony and merogony. First, sporozoites infect WBCs (mononuclear phagocytes) and undergo schizogony (asexual reproduction) to form schizonts. Schizont-infected WBCs have been detected ~12 days after experimental infection and increase in size from 15 µm to up to 250 µm in diameter. They are most commonly detected in lymph node, spleen, liver, lung, and bone marrow but have been documented in many organs and are occasionally seen on blood smears.

Schizont-infected WBCs are the principal cause of disease and death; they are found predominantly lining and often occluding blood vessels. These “parasitic thrombi” result in ischemia and tissue necrosis. Schizont-infected WBCs then rupture and release piroplasms (merozoites), which infect RBCs. The piroplasms in RBCs are fairly innocuous, with parasitemias ranging from 1%–4% on average; however, higher parasitemias (ie, >10%) have been documented. During acute infection, detection of merozoite-infected RBCs is variable and has been correlated with an increase in body temperature and a decrease in leukocytes. Without treatment, survivors typically remain chronically parasitemic, and at least one cat has been shown experimentally to be solidly immune to subsequent infections. Chronic parasitemia has been established via inoculation with merozoite-infected RBCs. These chronically parasitemic cats did not develop overt clinical disease but were not immune to subsequent challenge with infection of sporozoites/schizonts, suggesting that the schizogenous tissue phase is required to establish immunity in domestic cats.

Onset of clinical signs for cats infected with C felis usually occurs 5–14 days (~10 on average) after infection by tick transmission. Nonspecific signs such as depression, lethargy, and anorexia are the most common presenting problems. Pyrexia and dehydration are the most common findings on physical examination; body temperature, which increases gradually, can be as high as 106°F (41°C). Other findings include icterus, lymphadenomegaly, and hepatosplenomegaly. In extremis, cats are often hypothermic, dyspneic, and vocalize as if in pain. Without treatment, death typically occurs within 2–3 days after peak in temperature. At necropsy, splenomegaly, hepatomegaly, enlarged lymph nodes, and renal edema are usually seen. The lungs show extensive edema and congestion with petechial hemorrhage on serosal surfaces and throughout the interstitium. There is progressive venous distention, especially of the mesenteric and renal veins and the posterior vena cava. Hydropericardium is often seen with petechial hemorrhage of the epicardium.

When first described, mortality of C felis infection was reported to be nearly 100%. A study of C felis in northwestern Arkansas and northeastern Oklahoma indicated survival of natural infection in 18 cats with and without treatment; these cats seemed "less sick" initially, did not have temperatures >106°F (41°C), and never became hypothermic. Similar sporadic reports in other areas exist. Some hypotheses for survival in these cats have included the following: 1) an atypical route of infection, 2) innate immunity in certain cats, 3) increased detection of carriers, 4) decreased virulence with strain attenuation or occurrence of a new strain, 5) dose of infectious inoculum, and 6) timing and type of treatment.

The most common abnormalities on the CBC in animals with cytauxzoonosis include leukopenia with toxic neutrophils and thrombocytopenia with a normocytic, normochromic anemia seen at later stages. The most common biochemical abnormalities are hyperbilirubinemia and hypoalbuminemia but may vary depending on organ systems affected by parasitic thrombosis and ischemia with tissue necrosis. Other, less consistently detected abnormalities include increased liver enzyme concentrations and azotemia.

Rapid diagnosis requires microscopic observation of piroplasms or schizonts. Observation of piroplasms on blood smears is variable; they are seen in association with increasing body temperature and typically become apparent approximately 1–3 days before death. There are anecdotal reports of a higher level of sensitivity when blood is collected from smaller vessels (eg, ear vein prick) to prepare blood smears. On a well-prepared, well-stained (Wright-Giemsa, Giemsa, Romanowsky most commonly) blood smear, when detectable, merozoites may be seen ranging from 1%–4% on average, with extremely high percentages (ie, >10%) reported in some cases. They are pleomorphic and may be round, oval, anaplasmoid, bipolar (binucleated), or rod-shaped; however, the round and oval piroplasm forms are most commonly seen. The round forms are 1–2.2 µm in diameter, whereas oval forms are 0.8-1 µm × 1.5–2 µm. They are pale centrally and contain a small, magenta, round to crescent-shaped nucleus on one side. Once the parasitemia is ~0.5%, Maltese cross and paired piriforms may be seen. Smears must be examined carefully to exclude Mycoplasma haemofelis, Howell-Jolly bodies, stain precipitate, and water artifact.

The schizont tissue stage precedes the formation of the RBC phase. Occasionally, schizonts may be seen in peripheral blood smears, particularly at the feathered edge, and may be mistaken for large platelet clumps at low power. In the absence of detection of RBC piroplasms or schizonts on blood smear, a rapid diagnosis should be pursued by performing fine-needle aspiration of a peripheral lymph node, spleen, or liver to identify schizonts cytologically. These phagocytes are 15–250 µm in diameter and contain an ovoid nucleus with a distinctive, prominent, large, dark nucleolus. The cytoplasm is often greatly distended, with numerous small deeply basophilic particles representing developing merozoites.

In the absence of these observations, a diagnostic PCR test with greater sensitivity and specificity than microscopy can be done. This test is recommended in suspect cases in which the parasite is not observed, as well as to confirm identification of piroplasms or schizonts.

Historically, attempts to treat cytauxzoonosis with a variety of antiparasitic drugs (parvaquone, buparvaquone, trimethoprim/sulfadiazine, sodium thiacetarsamide) have been met with little success. In one study, five of six cats and one additional cat were successfully treated with diminazene aceturate (not approved in the USA) and imidocarb dipropionate (2 mg/kg, IM, two injections 3−7 days apart), respectively.

The most consistent successful treatment in a large case series resulted in survival of 64% of cats given a combination of atovaquone (15 mg/kg, PO, tid for 10 days) and azithromycin (10 mg/kg/day, PO, for 10 days) and supportive care. Atovaquone is a ubiquinone analogue that binds cytochrome b. In one study of C felis–infected cats treated with atovaquone and azithromycin, a C felis cytochrome b subtype (cytb1) was identified that was associated with increased survival in the cats infected with this subtype compared with other subtypes. Future development of a rapid means to identify the cytb1 C felis subtype in infected cats may help better predict the likelihood of survival with treatment.

Supportive care, including IV fluid therapy and heparin (100–200 U/kg, SC, tid) should be instituted in all cases. Nutritional support via an esophageal or nasoesophageal feeding tube is recommended, which also facilitates administration of oral medications (eg, atovaquone and azithromycin). Oxygen therapy and blood transfusions should be administered when necessary. Anti-inflammatory drugs may be warranted in cases with unrelenting fever; however, the use of NSAIDs is contraindicated in cats with azotemia or dehydration. Once a diagnosis is achieved and treatments have begun, minimal stress and handling are recommended. Recovery, including resolution of fever, is often slow and may take as long as 5–7 days. Cats that survive have a complete clinical recovery, including resolution of hematologic and biochemical abnormalities within 2–3 wk. Some survivors remain persistently infected with piroplasms and may represent a reservoir of infection. In one study, dose-intense diaminazene diaceturate (4 mg/kg/day, IM, for 5 consecutive days) failed to reduce the severity of parasitemia in cats chronically infected with C felis and resulted in adverse drug reactions.

Routine application of a tick preventive is recommended to prevent cytauxzoonosis; however, disease has occurred in cats despite this treatment. In one study, a tick-repellent collar for cats containing imidacloprid 10%/flumethrin 4.5% prevented A americanum ticks from attaching, feeding, and transmitting C felis in 10 cats infested with infected ticks after application of the collar. In the same study, ticks attached and fed on 10 of 10 control cats not treated with a collar, and 9 of the 10 control cats were infected with C felis. Exclusion of cats from areas likely to be infested with the tick vector (ie, indoor only) is still considered the best method of prevention.