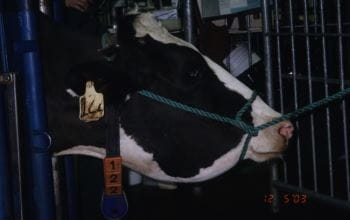 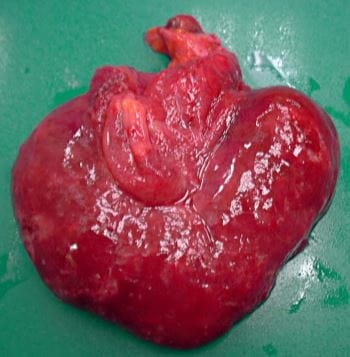 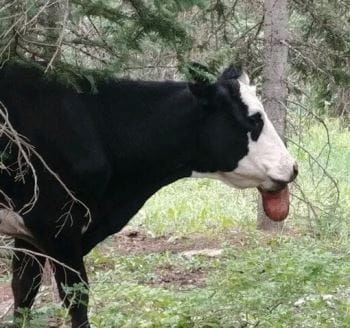 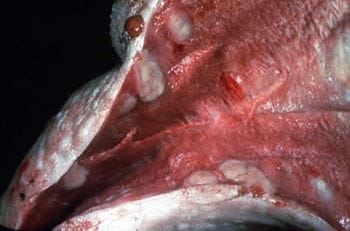 Actinobacillosis, cow
Actinobacillosis is caused by several species of gram-negative coccobacilli of the genus Actinobacillus. Clinical signs vary, depending on the specific bacteria and the animal species they infect. Diagnosis can be confirmed by culture, PCR, or ELISA of tissue samples to identify the bacteria. Antibiotics are the usual treatment in swine and horses. Sodium iodide is used in ruminants, although antibiotics or surgical debulking may be required in severe or refractory cases.

The genus Actinobacillus includes gram-negative coccobacilli that occasionally cause disease. Although there are more than 22 different bacterial species in this genus, only five (A pleuropneumoniae, A suis, A equuli, A lignieresii, and A seminis) are regularly associated with disease in animals.

A pleuropneumoniae (formerly Hemophilus pleuropneumoniae, H parahaemolyticus) causes contagious pleuropneumonia in pigs. Disease ranges from acute, severe fibrinous pleuropneumonia to subacute or chronic infection with pleuritis and pulmonary abscessation. Immune complexes formed as a result of host response may damage endothelial cells, resulting in vasculitis and thrombosis, with edema, necrosis, infarction, and hemorrhage. Infection is usually restricted to pigs <5 months of age. A pleuropneumoniae may be normal mucosal flora in pigs, cattle, and sheep.

A suis is part of the normal flora of the oral cavity of pigs. It causes septicemia in young pigs and causes arthritis, pneumonia, and pericarditis in older pigs. It may also cause septicemia, arthritis, pneumonia, and purulent nephritis in neonatal and postnatal foals. Disease follows a break in the integrity of the oral mucosa or may be associated with immunosuppression. The organism is typically susceptible to sulfonamides and cephalosporins.

The natural host of A equuli is the horse, and infections are seen in both foals and adult horses. Disease in foals may manifest as diarrhea, followed by meningitis, pneumonia, purulent nephritis, or septic polyarthritis (sleepy foal disease or joint-ill). Infection may be acquired through a contaminated umbilicus or by inhalation or ingestion. The incidence of foal infection is reduced with greater attention to sanitation in the birthing environment, and maternal antibodies in colostrum are often protective. Abortions, septicemia, nephritis, peritonitis, and endocarditis may result from A equuli infection in adult horses.

A arthritidis is a newly described species, previously classified as Bisgaard taxon 9, which has been isolated from horses with arthritis and septicemia.

A lignieresii causes tumorous abscesses of the tongue, usually referred to as wooden tongue. It is seen primarily in cattle but also in sheep, horses, pigs, and dogs. It is a rare cause of disease in chickens.

The organism may also cause pyogranulomatous lesions in soft tissues associated with the head, neck, limbs, and occasionally the lungs, pleura, udder, and subcutaneous tissue. The organism is part of the normal mucosal flora of the upper GI tract and causes disease when it gains access to adjacent soft tissue via penetrating wounds. It causes localized infections and can spread via the lymphatics to other tissues.

The primary lesion associated with A lignieresii infection in cattle is a very hard, diffusely swollen tongue. This leads to excessive salivation, the inability to prehend food normally, and sometimes a visibly enlarged tongue that protrudes from the mouth. On palpation, the tongue will feel very hard and painful. This form of actinobacillosis is found worldwide but is sporadic and thus difficult to prevent. Herd outbreaks are also possible and are generally associated with the consumption of coarse, abrasive feeds that predispose to formation of lesions in the mouth.

A seminis is an occasional cause of polyarthritis in young lambs and epididymitis in adult rams. A ureae has caused upper respiratory tract infections in humans and abortions in pigs. In addition, A actinoides has occasionally been associated with suppurative pneumonia in calves and seminal vesiculitis in bulls.

Diagnosis of A pleuropneumoniae in swine is made by culture of the organism from nasal swabs or lung tissue at necropsy. Molecular techniques such as PCR and ELISA have also been developed that detect the presence of the organism in tissue samples. Both in foals and adult horses, there are several other bacteria that can cause the same clinical disease syndromes as A equuli, so definitive diagnosis is important, which requires isolating the bacteria in culture.

In cattle, the diagnosis of wooden tongue requires culture and biopsy of the lesion. Pus from the abscesses crushed between two glass slides may show club-like spicules of calcium phosphate, giving the appearance of sulfur granules <1 mm in diameter. There are no reliable serologic tests available for actinobacillosis, and the hematologic and clinical chemistry findings are generally normal. Gross pathology generally reveals a firm, pale tongue containing multifocal nodules. These nodules are often filled with thick, yellow-white pus. Histologically, the primarily lesion is a granulomatous abscess.

Treatment of respiratory disease in swine involves the use of antibiotics, including penicillin, tetracycline, spectinomycin, cephalosporins, or fluoroquinolones. In horses, A equuli infections may be treated with chloramphenicol, gentamicin, or third-generation cephalosporins, depending on the nature of the infection and the ability to achieve therapeutic concentrations at the site of infection. Beta-lactam antibiotics and sulfonamides have been recommended in the past, but widespread resistance to both of these antibiotics has been recently reported.

Sodium iodide is the treatment of choice in ruminant actinobacillosis. Intravenous sodium iodide (70 mg/kg of a 10% to 20% solution) is given once and then repeated 1–2 times at 7- to 10-day intervals. If clinical signs of iodine toxicity develop (including dandruff, diarrhea, anorexia, coughing, and excessive lacrimation), iodine administration should be discontinued. Clinical improvement is often seen within 48 hours of therapy, and treatment is usually successful when only the tongue is involved. Systemic antibacterial agents, such as ceftiofur, penicillin, ampicillin, florfenicol, and tetracyclines may be effective and are primarily recommended in severe cases of actinobacillosis or in cases refractory to sodium iodide therapy. Surgical debulking of lesions, especially if they interfere with airflow, may be useful. This is particularly true when large granulomatous masses are present that do not respond to medical therapy.

Control of A pleuropneumoniae in swine focuses on good management combined with the use of vaccines, or on eradication of the infection from the herd by depopulation. In ruminants, wooden tongue is prevented primarily by avoiding coarse, stemmy feedstuffs and pastures full of hard, penetrating plant awns (ie, foxtails or thistles).

Actinomycosis in Cattle, Swine, and Other Animals
Others also read