Congenital and Inherited Anomalies of the Musculoskeletal System in Cattle 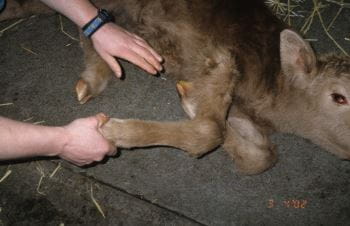 Arthrogryposis is ankylosis of the limbs, usually combined with a cleft palate and other growth deformities. It is seen in all breeds of cattle, particularly Charolais. At birth, affected calves exhibit joints fixed in abnormal positions and frequently have scoliosis and kyphosis. They are usually unable to stand or nurse. Muscle changes, notably atrophy, have also been seen. In the spinal cord, necrosis of neurons and lesions of the white matter may be seen. Arthrogryposis has more than one etiology and pathologic entity. The arthrogryposis syndrome in Charolais is caused by an autosomal recessive gene with complete penetrance in the homozygous state. Teratogens identified as causing arthrogryposis include plants such as lupines (anagyrine as the toxic agent) that are ingested by pregnant cows between day 40 and 70 of gestation. Prenatal viral infections with the Akabane Akabane and Related Simbu Serogroup Virus Infections in Ruminants Akabane and related Simbu serogroup viruses are transmitted to ruminants by Culicoides midges. They cause congenital abnormalities of the CNS and musculoskeletal system in ruminants. Diagnosis... read more or bluetongue Bluetongue read more virus can also cause arthrogryposis.

In dairy cattle with brown atrophy, the skeletal muscles and myocardium are yellow-brown to bronze. The masseter muscles and the diaphragm are affected most frequently. No clinical disease results. Certain breeds (eg, Ayrshire) are more predisposed than others. Microscopically, brown lipofuscin pigment granules accumulate under the sarcolemma or centrally in the muscle fibers. The inheritance pattern of one affected and three normal offspring suggests that this condition may result from inheritance of a simple recessive gene.

Double muscling is an overdevelopment of the musculature of the shoulder, back, rump, and hindquarters, separated by deep creases, particularly between the semitendinosus and biceps femoris, and between the longissimus dorsi muscles of either side. Necks of double-muscled cattle are shorter and thicker, and their heads appear smaller. Associated disorders include hypoplastic reproductive tracts, delayed reproductive age of maturity, and lengthened gestation and increased birth weights combined with dystocia. The condition is seen in various beef breeds, including Charolais, Santa Gertrudis, South Devon, Angus, Belgian Blue, Belgian White, and Piedmontese. Double muscling is caused by a pair of incompletely recessive genes that result in the inhibition of myostatin activity in various degrees of the condition. Succinic dehydrogenase activity is significantly decreased in affected calves.

Limber leg is a hereditary condition of Jersey cattle, apparently controlled by a simple lethal autosomal recessive gene. Some affected calves are born dead. Living calves appear normal at birth but are unable to stand because of incompletely formed muscles, ligaments, tendons, and joints. The shoulder and hip joints can be rotated in any direction without apparent discomfort. Diagnosis is based on signs, necropsy findings, and identification of carrier animals.

Perosomus elumbis is an occasionally found congenital anomaly of unknown etiology that is characterized by partial or complete agenesis of the lumbar, sacral, and coccygeal area and accompanied by posterior bimelic arthrogryposis characterized by ankylosis of joints with associated malformations of the musculature. Affected calves cannot use their hindlegs and must be euthanized. The defect is suspected to be inherited. A reduced number of vertebrae has been reported rarely but also has been claimed to be a genetic defect. The condition has also been reported in sheep and pigs.

There are several defects of the spinal column that include short spine lethal, atlanto-occipital fusion, kyphosis (dorsal arching of the back), lordosis (ventral), scoliosis (lateral), and torticollis (twisted). These defects may occur alone, in combination with, or associated with defects of other body systems, particularly of the CNS.

Congenital and Inherited Anomalies of the Musculoskeletal System in Multiple Species