The Lameness Examination in Horses

A systematic investigation of a lame horse may be time consuming when the cause is not obvious. The examination benefits from standardized facilities such as a level, firm, nonslip surface to walk and trot the horse and a soft support area to lunge and ride the horse. The examiner must be knowledgeable in equine anatomy, normal conformation and gaits, regional anesthesia, and imaging techniques and be able to recognize forelimb and hindlimb lameness.

The examination begins with a comprehensive medical history; type, age, and training regimen may give important clues to the lameness, as will the time since onset of lameness, interim management, and any suggestions that the lameness may improve with either rest or exercise. The interval since the last shoeing should also be noted. Response to anti-inflammatory or analgesic medications may provide useful information. Results of hematologic and biochemical analyses may shed light on other problems that influence overall performance.

Although valuable, modern diagnostic imaging techniques are no substitute for detailed visual inspection and thorough manual palpation of the limbs in weightbearing and nonweightbearing positions. Conformation should be evaluated and the horse visually checked for symmetry, swellings, muscle loss, abnormal stance, and obvious injuries. The trunk and limbs should be palpated for heat, pain, swellings, and joint effusion. The high degree of variation between horses should be remembered, and comparison with the contralateral limb should always be done, although the latter may not necessarily be a useful control. The reaction of the horse to palpation and the range of flexion and extension of all joints should be noted. The feet should be thoroughly examined, including compression of the walls and sole with hoof testers. Wear patterns of shoes and feet should be noted. A number of abnormalities such as broken toe/pastern axis; mismatched hoof angles; under-run, contracted, and sheared heels; and disproportionate hoof size are seen more frequently in lame than in sound horses. Shoes should be left on during the initial stages of the examination, because removing them might make the horse footsore and preclude further examination with the horse being trotted or ridden. Shoes should be removed for complete and thorough examination of the foot when the lameness has been localized to the foot and any exercise needed for diagnosis has been completed.

The back and neck should be thoroughly examined with the horse restrained and standing square on a level surface. Flexibility and extensibility of the back can be checked by alternately pinching the midline in the midthoracic and sacrococcygeal regions, whereas lateral flexion can be checked by turning the horse short around its own axis.

Examination during exercise is often required to localize the lameness to a specific limb or site and to evaluate the response to diagnostic regional anesthesia. If lameness is major and acute and a fracture is suspected, exercise should not be undertaken or a catastrophic breakdown may result. Similarly, diagnostic regional anesthesia should not be performed when a fracture is suspected. It is important to determine whether the horse may have been given analgesic medication before the lameness examination.

The horse should initially be examined by walking and jogging in hand with a loose line to the halter so that the movement of the horse is not restricted. A firm, nonslippery surface (eg, hardpack fine gravel) is ideal to trot on a straight line and to lunge on a firm surface. It also provides an opportunity to listen to the footfall and consider this information along with the visual appraisal. However, feet of different sizes and shapes and different shoes make slightly different impact sounds, often rendering these sounds of little diagnostic value. Frequently, lameness is more pronounced when the horse is worked in a circle. Circling can be done on a lunge line, free exercise in a large round pen, in hand, or under saddle. Lungeing on asphalt or concrete predisposes the horse to slipping and injury but may be done in selected cases to accentuate a very subtle hoof or lower limb lameness. Both forelimb and hindlimb lameness may become worse when the horse is circled; most of the time, the lameness is accentuated when the affected limb is on the inside of the circle.

Flexion tests are useful diagnostic tools. The range of movement and response to passive flexion, along with any suggestion of increased lameness or onset of lameness after flexion, should be observed. The distal phalanges in both forelimbs and hindlimbs should be flexed independently of the carpus and hock to obtain maximal information. Bending pressure should be firm but not excessive, which can create false-positive responses. All tests should be done on both sound and lame limbs for comparison. Consistency should always be applied, and individual experience used. A single positive flexion test without associated lameness may not be of significance.

To establish consistency, the entire examination should involve the same handler, the same bitting when the horse is under saddle, and the same surfaces under foot. The horse should be controlled so that it is trotting at a useful, repeatable pace to evaluate the lameness. Very slight sedation of nervous or fractious horses with 3 mg romifidine or 100 mg xylazine may result in a horse with a more relaxed outline and allow a better assessment without seemingly influencing the degree of lameness. Slowing down the pace at the trot often illustrates a subtle lameness better, because the horse loses its momentum and struggles with suspension in the affected limb(s).

A ridden assessment of the horse may be necessary, particularly with a subtle lameness that can only be observed under saddle. A multiple-limb lameness without an obvious single-limb lameness may also be detected. The clinical signs may be minor (eg, the horse refusing certain movements or activities, slight head tilts, or tail swishing). However, a good rider can, often inadvertently, hide a problem by his or her inherent expertise and ability to “correct” difficulties.

Occasionally, a horse appears to be sound when lunged and ridden, but the rider feels that the performance is impaired. In such cases, it may be worth working the horse on concomitant analgesic or anti-inflammatory medication at therapeutic levels for an adequate period (eg, phenylbutazone 2–3 g/day, PO, for 7–14 days) to assess whether improvement occurs. Some clinical signs purported to be caused by lameness are training problems. If improvement on medication occurs, the medication should be withdrawn and diagnostic anesthesia used beginning in an arbitrary limb, most often a forelimb. In this way, multiple-limb lamenesses (as many as four), often mimicking the clinical picture associated with back pain, can be evaluated and treated. 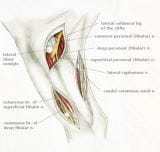 ) should be used to determine the area of pain in all lame horses in which the lameness can be localized to a specific limb but not to a specific site on the limb. A consistently observable lameness must be present for the clinician to evaluate response to anesthesia.

Observing the horse execute movements such as turning short, backing, “hopping” on one forelimb (with the other forelimb held up), negotiating a curb, turning in tight circles, and walking uphill and downhill should be done. These tests help determine whether reduced proprioception, weakness, or spasticity may be the cause of the gait abnormality.