Neoplasia of the Peripheral Nerves and Neuromuscular Junction in Animals 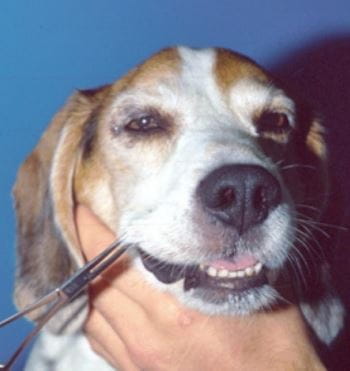 Nerve sheath tumors include schwannomas (neurilemmomas) and neurofibromas. They are seen in most domestic animals but are most common in dogs and cattle. In dogs, tumors often arise in the nerves of the brachial plexus, initially causing unilateral thoracic limb lameness and pain that may be confused with musculoskeletal disease. Pain may be elicited on palpation of the axilla or abduction of the limb; large tumors can be palpated. Muscle atrophy and monoparesis eventually develop. The spinal cord may become compressed by the invasive tumor, causing neurologic deficits in other limbs. The trigeminal nerve is the most frequently affected cranial nerve. This results in unilateral atrophy of the temporalis and masseter muscles and facial dysesthesia or anesthesia. Eventually, brain-stem compression can develop.

Early surgical excision may be curative, although recurrence at the proximal stump of the resected nerve(s) is common. Radiation therapy helps to slow progression. In cattle, nerve sheath tumors are often recognized incidentally in old animals at slaughter. Often, multiple nerves, especially autonomic nerves and cranial nerve VIII, are affected. Peripheral nerves may also be affected by other tumors, including lymphoma and leukemia. (Also see Neoplasia of the Nervous System Neoplasia of the Nervous System read more andsee Peripheral Nerve Sheath Tumors Peripheral Nerve Sheath Tumors Collagenous nevi are benign, focal, developmental defects associated with increased deposition of dermal collagen. They are common in dogs, uncommon in cats, and rare in large animals. They... read more

(Also see Paraneoplastic Disorders of the Nervous System Paraneoplastic Disorders of the Nervous System read more ). Paraneoplastic neuropathy is associated with neoplasia unrelated to tumor infiltration of nerves. It is most common in dogs with insulinoma but has been associated with a variety of tumors, including bronchogenic carcinoma, multiple myeloma, sarcoma, and adenocarcinoma. The pathogenesis is not well understood but may be related to an immune response directed against the tumor that cross-reacts with nerve components. Clinically, there is paraparesis or tetraparesis that progresses over several weeks, with decreased spinal reflexes and muscle atrophy. Diagnosis is based on identifying the underlying tumor, clinical and electrodiagnostic findings consistent with neuropathy, and, in some cases, nerve biopsy. Signs may improve with successful treatment of the underlying tumor.

Degenerative Disorders of the Peripheral Nerves and Neuromuscular Junction in Animals

Paraneoplastic Disorders of the Nervous System in Animals