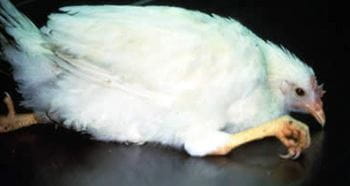 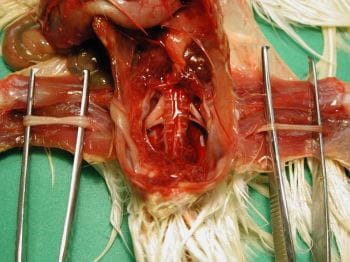 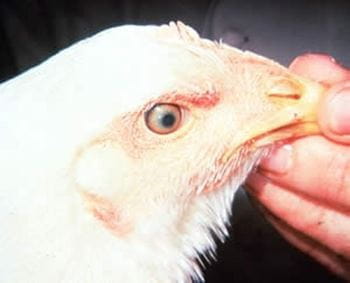 Chickens are the most important natural host for Marek's disease virus (MDV), a highly cell-associated but readily transmitted alphaherpesvirus with lymphotropic properties of gammaherpesviruses. Quail can be naturally infected, and turkeys can be infected experimentally. However, severe clinical outbreaks of Marek's disease in commercial turkey flocks, with mortality from tumors reaching 40%–80% between 8 and 17 weeks of age, were reported in France, Israel, and Germany. In some of these cases, the affected turkey flocks were raised in proximity to broilers. Turkeys are also commonly infected with turkey herpesvirus (HVT), an avirulent strain related to Marek's disease virus that is commonly used as a Marek's disease vaccine in chickens. Other birds and mammals appear to be refractory to the disease or infection.

Marek's disease is one of the most ubiquitous avian infections; it is identified in chicken flocks worldwide. Every flock, except for those maintained under strict pathogen-free conditions, is presumed to be infected. Although clinical disease is not always apparent in infected flocks, a subclinical decrease in growth rate and egg production may be economically important.

Marek's disease is highly contagious and readily transmitted among chickens. The virus matures into a fully infective, enveloped form in the epithelium of the feather follicle, from which it is released into the environment. It may survive for months in poultry house litter or dust. Dust or dander from infected chickens is particularly effective in transmission. Once the virus is introduced into a chicken flock, regardless of vaccination status, infection spreads quickly from bird to bird. Infected chickens continue to be carriers for long periods and act as sources of infectious virus. Shedding of infectious virus can be reduced, but not prevented, by prior vaccination. Unlike virulent strains of Marek's disease virus, which are highly contagious, turkey herpesvirus is not readily transmissible among chickens (although it is easily transmitted among turkeys, its natural host). Attenuated Marek's disease virus strains vary greatly in their transmissibility among chickens; the most highly attenuated are not transmitted. Marek's disease virus is not vertically transmitted.

Currently, four phases of infection with Marek's disease in vivo are recognized:

Productive infection may occur transiently in B lymphocytes within a few days after infection with virulent Marek disease virus strains and is characterized by antigen production, which leads to cell death. Because few if any virions are produced, this has also been termed a restrictive-productive infection. Productive infection also occurs in the feather follicle epithelium, in which enveloped virions are produced. Latent infection of activated T cells is responsible for the longterm carrier state. No antigens are expressed, but virus can be recovered from such lymphocytes by cocultivation with susceptible cells in tissue cultures. Some T cells, latently infected with oncogenic Marek disease virus strains, undergo neoplastic transformation. These transformed cells, provided they escape the immune system of the host, may multiply to form characteristic lymphoid neoplasms.

The incidence of Marek's disease is quite variable in commercial flocks and depends on:

Typically, affected birds show only depression before death, but a transient paralysis syndrome has been associated with Marek disease; chickens become ataxic for periods of several days and then recover. This syndrome is rare in immunized birds. Death is usually the result of paralysis, rendering the birds unable to reach food and water.

Enlarged nerves are one of the most consistent gross lesions in affected birds. Various peripheral nerves, but particularly the vagus, brachial, and sciatic, become enlarged and lose their striations. Diffuse or nodular lymphoid tumors may be seen in various organs, particularly the liver, spleen, gonads, heart, lung, kidney, muscle, and proventriculus. Enlarged feather follicles (commonly termed skin leukosis) may be noted in broilers after defeathering during processing and are a cause for condemnation. The bursa is only rarely tumorous and more frequently is atrophic. Histologically, the lesions consist of a mixed population of small, medium, and large lymphoid cells plus plasma cells and large anaplastic lymphoblasts. These cell populations undoubtedly include tumor cells and reactive inflammatory cells. When the bursa is involved, the tumor cells typically appear in interfollicular areas.

For the diagnosis of Marek's disease, it is critical to diagnose the tumors and not the infection because Marek's disease is considered ubiquitous within commercial poultry flocks. Usually, diagnosis is based on enlarged nerves and lymphoid tumors in various viscera. The absence of bursal tumors helps distinguish this disease from lymphoid leukosis Lymphoid Leukosis in Poultry Lymphoid leukosis is a neoplastic disease of poultry caused by avian leukosis virus. The disease is characterized by B-cell lymphoma, occurring in chickens approximately 16 weeks of age and... read more

Standard criteria are often sufficient for a presumptive diagnosis, but advanced criteria are needed for a definitive diagnosis. Immunohistochemistry can be used to confirm tumors are composed of predominant T-cell populations or expressing specific MDV antigens. There is a quantitative association between viral load and Marek's disease tumors; most tumor-bearing chickens have high viremia titers and are usually PCR positive. Thus, the demonstration of high quantities of virus, viral DNA, or viral antigens in tumor cells and the exclusion of other relevant tumor viruses should be sufficient for a specific diagnosis of Marek's disease.

Vaccination is the central strategy for the prevention and control of Marek's disease, along with strict sanitation to reduce or delay exposure and by breeding for genetic resistance.

The most widely used vaccines include:

Vaccines are administered at hatch or in ovo to embryos at the 18th day of incubation. In ovo vaccination is now performed by automated technology and is widely used for vaccination of commercial broiler chickens, mainly because of reduced labor costs and greater precision of vaccine administration.

Proper handling of vaccine during thawing and reconstitution is crucial to ensure that adequate doses are administered. Cell-associated vaccines are generally more effective than cell-free vaccines, because they are neutralized less by maternal antibodies. Under typical conditions, vaccine efficacy is usually >90%. Since the advent of vaccination, losses from Marek's disease have been reduced dramatically in broiler and layer flocks. However, disease may become a serious problem in individual flocks or in selected geographic areas (eg, the Delmarva broiler industry). Of the many causes proposed for these excessive losses, early exposure to very virulent virus strains appears to be among the most important.