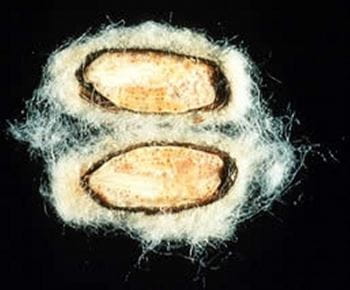 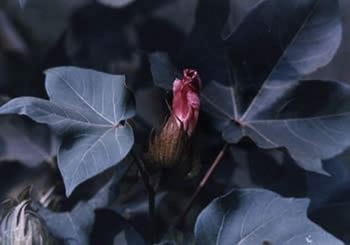 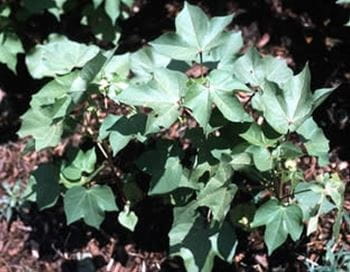 Gossypium spp, young plant
Gossypol is produced naturally by the glands of the cotton plant. Although all animals are susceptible to gossypol toxicity, monogastrics, preruminants, immature ruminants, and poultry are affected most frequently. Affected animals may show cardiac failure and sudden death; hepatotoxicosis; liver necrosis secondary to congestive heart failure; hematologic effects, including anemia and increased RBC fragility; reproductive effects (including decreased libido and spermatogenesis in males; irregular cycling, disrupted pregnancy, and embryonic death in females; and green coloration of egg yolks and decreased hatchability in chickens); thumping in swine; and cardiotoxicosis in dogs. Treatment requires removal of the gossypol source, usually the feed, and supportive care.

Etiology of Gossypol Poisoning in Animals

Gossypol, the predominant pigment and probably the major toxic ingredient in the cotton plant (Gossypium spp), and other polyphenolic pigments are contained within small, discrete structures called pigment glands found in various parts of the cotton plant. Gossypol is found in cottonseed as both protein-bound and free forms; only the free form is toxic. Gossypol content of cottonseeds varies from a trace to >6% and is affected by plant species and variety and by environmental factors such as climate, soil type, and fertilization. Gossypol is a natural component of all but the rarely produced “glandless” variety of cotton.

Lipid-soluble gossypol is readily absorbed from the GI tract. It is highly protein-bound to amino acids, especially lysine, and to dietary iron. The precise mechanism of action is not known; however, gossypol renders many amino acids unavailable by the formation of a Schiff’s base-type derivative as well as additional protein/gossypol interactions. Gossypol also affects enzymatic reactions critical for many biologic processes, including the ability of cells to respond to oxidative stress and inhibition of oxygen release from hemoglobin. Conjugation, metabolism, and urinary excretion of gossypol is limited; most is eliminated in the feces.

All animals are susceptible to gossypol toxicity; however, monogastrics, preruminants, immature ruminants, and poultry appear to be affected most frequently. Toxic effects usually occur only after longterm exposure to gossypol, often weeks to months. Adult ruminants are able to detoxify gossypol by formation of stable complexes with soluble proteins in the rumen, thus preventing absorption, something lacking in swine, preruminants, and young ruminants with only a partially functioning rumen. Pigs, guinea pigs, and rabbits are reported to be sensitive to gossypol; dogs and cats appear to have intermediate sensitivity. Goats may be more sensitive to gossypol than are cattle. Horses appear relatively resistant to gossypol, but caution is still advised.

Clinical signs of gossypol toxicosis may relate to effects on the cardiac, hepatic, renal, reproductive, or other systems. Prolonged exposure can cause acute heart failure resulting from cardiac necrosis. Also, a form of cardiac conduction failure similar to hyperkalemic heart failure can result in sudden death. Pulmonary effects, labored breathing, and chronic dyspnea are most likely secondary to cardiotoxicosis from congestive heart failure.

Hepatotoxicosis can be a primary effect from direct damage to hepatocytes or metabolism of phenolic compounds to reactive intermediates, or liver necrosis may be secondary to congestive heart failure. Gossypol inhibits glutathione-S-transferase, impairing the liver’s ability to metabolize xenobiotic compounds. Hematologic effects include anemia with reduced numbers of RBCs and increased RBC fragility, decreased oxygen release from oxyhemoglobin, and reduced oxygen-carrying capacity of blood with lowered Hgb and PCV values due to complexing of iron by gossypol.

Reproductive effects include reduced libido with decreased spermatogenesis and sperm motility, as well as sperm abnormalities (which are reversible) resulting from enzyme inhibition of steroid synthesis in testicular Leydig cells. Specific mitochondrial damage in spermatozoa appears to cause immobility and depressed sperm counts. Extensive damage to germinal epithelium in both rams and bulls fed excessive gossypol may be responsible for depressed spermatogenesis. Effects in females may include irregular cycling, luteolytic disruption of pregnancy, and direct embryotoxicosis; probable mechanisms include an endocrine effect on the ovary as well as a direct cytotoxic effect on the uterus or embryo. Green discoloration of egg yolks and decreased egg hatchability have been reported in poultry. However, antifertility and reproductive effects in many nonruminant species are secondary to the more toxic effects, particularly in females.

Clinical signs of prolonged excess exposure to gossypol in many animals are reduced growth rate, weight loss, weakness, anorexia, and increased susceptibility to stress. Young lambs, goats, and calves may suffer cardiomyopathy and sudden death; if the course is more chronic, they may be depressed, anorectic, and have pronounced dyspnea. Adult dairy cattle may show weakness, depression, anorexia, edema of the brisket, and dyspnea, and also have gastroenteritis, hemoglobinuria, and reproductive problems. In monogastric animals, acute exposure may result in sudden circulatory failure, whereas subacute exposure may result in pulmonary edema secondary to congestive heart failure; anemia may be another common sequela. Violent dyspnea (“thumping”) is the predominant clinical sign in pigs. In dogs, gossypol has primarily cardiotoxic effects; deterioration is progressive, and ascites may be marked. Affected dogs may show polydipsia and have serum electrolyte imbalances, most notably hyperkalemia; with pronounced ECG abnormalities.

At postmortem, gross examination may show an enlarged, flaccid, streaked, and mottled heart with pale myocardial streaking; enlarged and dilated ventricles, and valvular edema may be evident. Skeletal muscles may also be pale. A froth-filled trachea and edematous, congested lungs are common, with interstitial pulmonary edema and markedly edematous interlobular septa. Generalized icterus and an enlarged, congested, mottled or golden, friable “nutmeg” liver with distinct lobular patterns may be evident. The kidneys, spleen, and other splanchnic organs may be congested, possibly with petechiae; mild renal tubular nephrosis may be present. Hemoglobinuria and edema and hyperemia of the visceral mucosa may develop. Cardiomyopathy in affected dogs may be focal or general producing severe abnormalities in contractility due to right-side congestive heart failure without pronounced cardiac dilatation, and granular myocardial degeneration with edema between and within myofibers on histopathologic examination. Pulmonary and hepatic changes can be minimal.

Diagnosis of Gossypol Poisoning in Animals

No serologic test for the diagnosis of gossypol toxicosis is available. Analyses of dietary components for free gossypol concentration must be correlated with history, clinical signs, and postmortem findings. However, as with many feed-induced toxicoses, the responsible feed may be already completely consumed and not available for analysis. Free gossypol concentration of >100 mg/kg (100 ppm) of feed in the diet of pigs or young ruminants <4 months old supports a presumptive diagnosis. Adult ruminants can detoxify higher concentrations of gossypol; however, intake should still be <1,000 ppm in the diet. Gossypol toxicosis was reported to develop in mature dairy goats each fed an estimated 350–400 mg gossypol per day for 3 months in a diet containing ~400 ppm free gossypol. Adverse effects on semen quality (decreased sperm motility and morphologic abnormalities) occurred in young bulls fed a concentrate containing 1,500 ppm free gossypol (providing 8.2 g free gossypol per head per day). Cottonseed meal containing 26.6% (266,000 ppm) total gossypol and 0.175% (1,750 ppm) free gossypol was toxic when fed to adult dogs for an unspecified length of time; however, the equivalent oral dosage of free gossypol fed was <6 mg/kg per day.

Gossypol can gradually accumulate in the kidneys and liver, which are additional specimens for postmortem analyses. In sheep, gossypol concentrations (free or bound) >10 ppm in the kidneys and >20 ppm in the liver suggest excess gossypol exposure. However, background and significantly increased tissue gossypol concentrations have not been determined in all animal species, so tissue analyses may be of limited diagnostic value.

Prevention, Treatment, and Control of Gossypol Poisoning in Animals

There is no effective treatment for gossypol toxicosis. Adsorbents such as activated charcoal and saline cathartics are of little value because of the chronic exposure and cumulative nature of gossypol. If gossypol toxicosis is suspected, all cottonseed products should be removed from the diet immediately. However, severely affected animals may still die up to 4 weeks after withdrawal of gossypol from the diet. Recovery depends primarily on the extent of toxic cardiopathy. Because exposure is usually chronic, and life-threatening lesions may be advanced before a diagnosis is made, a favorable prognosis for complete recovery may be unrealistic. Mild to moderate myocardial lesions may be reversible with time if stress is minimized and animals are carefully handled. However, poor weight gains in affected production animals and increased susceptibility to stress may persist for several weeks after cottonseed products are removed from the diet. A high-quality diet supplemented with lysine, methionine, and fat-soluble vitamins should be included in supportive therapy. Selenium or copper deficiencies may potentiate gossypol toxicosis.