Esophageal foreign bodies are more common in dogs than in cats. Bones are the most common foreign body; however, needles, fishhooks, wood, rawhide, and dental chew treats may also become lodged in the esophagus. Objects usually lodge in the areas of the esophagus with the least distensibility: the thoracic inlet, over the heart base, or the caudal esophagus just cranial to the diaphragm. Occasionally, an object may lodge in other locations such as the upper esophageal sphincter. 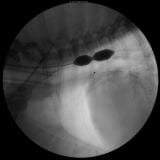 , and esophageal diverticulum Esophageal Diverticula in Small Animals Diverticula are pouch-like dilatations of the esophageal wall and may be congenital or acquired. They are rare in dogs and cats. Acquired diverticula are of two types: pulsion or traction. Pulsion... read more formation are also potential complications. Esophageal stricture formation is the most common complication associated with an esophageal foreign body. Aspiration pneumonia Pneumonia in Dogs and Cats Pneumonia is an inflammation of the pulmonary parenchyma that results in respiratory disturbance. It can be caused by a variety of organisms, including viruses, bacteria, fungi, parasites, and... read more may also be present secondary to the regurgitation.

Many esophageal foreign bodies are radiopaque and can be seen on plain radiographs. A contrast esophagram or esophagoscopy is often required to identify radiolucent foreign bodies. Because barium paste can obscure and potentially damage an endoscope, waiting 24 hours after an esophagram is recommended before doing an esophagoscopy. If a perforation is suspected, an iodinated contrast medium should be used instead of barium suspensions. Esophagoscopy permits evaluation of both the foreign body and the esophageal wall and often allows therapeutic intervention.

Esophageal foreign bodies, once diagnosed, should be removed immediately. Most often, a foreign body can be removed per os with a flexible endoscope and forceps. A rigid endoscope can also be used if a flexible scope is not available; however, care must be taken when manipulating the scope in the esophagus to prevent lacerations or perforations. If the foreign body is smooth, a Foley catheter can be inserted distal to the foreign body, inflated, then removed orally, bringing the foreign body with it. A large endotracheal tube can be placed over the endoscope to remove sharp foreign bodies such as fish hooks, which can be drawn up into the endotracheal tube and removed without damaging the esophagus on the way out.

If a foreign body cannot be removed per os, it may be pushed into the stomach, where it can either be digested (eg, bones), passed, or removed via a gastrotomy. Surgery is indicated if a perforation has occurred or the foreign body cannot be removed via endoscopy. However, there is potential for stricture formation and complications secondary to the poor wound-healing ability of the esophagus. Esophagitis Esophagitis in Small Animals Inflammation of the esophagus is usually due to foreign bodies, gastroesophageal reflux, and occasionally certain drugs (eg, doxycycline). Gastroesophageal reflux is usually associated with... read more , if present, should be treated appropriately.

If severe circumferential damage of the esophagus is observed, the risk of stricture formation is higher, and a recheck endoscopy should be recommended within 1–2 weeks after foreign body removal. Percutaneous endoscopic gastrotomy tube placement while removing the foreign body is controversial. Keeping the esophagus opened mechanically via oral feeding may be beneficial. However, feeding may trigger more inflammation, damage, and pain. In all cases, aggressive medical management, including administering sucralfate and omeprazole, is recommended.