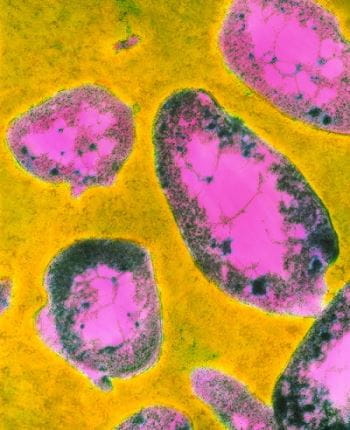 Francisella tularensis bacteria
Tularemia is a bacterial septicemia that infects >250 species of wild and domestic mammals, birds, reptiles, fish, and people. It is listed as a category A bioterrorism agent because of the potential for fatality, airborne dissemination, and societal disruption if released. Clinical signs depend on the host species, subspecies of bacteria, and route of infection. Diagnosis is confirmed by culture, serology, or PCR. Antibiotic treatment can be effective if begun early.

The causative bacterium, Francisella tularensis, is a nonspore-forming, gram-negative coccobacillus antigenically related to Brucella spp. It is a facultative intracellular parasite that is killed by heat and proper disinfection but survives for weeks or months in a moist environment. It can be cultured readily on blood supplemented with cysteine but must be differentiated from other gram-negative bacteria on blood agar. The taxonomic status of Francisella has been revised and debated, but recent consensus establishes the subspecies F tularensis tularensis, associated with type A tularemia; F tularensis holarctica, which causes type B tularemia; and a third type, C, associated with F novicida, which has low virulence and is less common than the other two. Type A has been found predominantly in North America and is more virulent; in people, the mortality rate may be as high as 30% if untreated. Type B is less virulent and occurs in both the Old and New Worlds.

Among domestic animals, clinical infection of tularemia has been reported in sheep, cats, dogs, pigs, and horses. Cats are at increased risk because of predatory behavior on small mammal hosts and appear to have an increased susceptibility, whereas cattle appear to be resistant. Little is known of the true incidence and spectrum of clinical disease in domesticated animals. Important wild animal hosts for F tularensis tularensis include cottontail and jackrabbits, whereas the most common vectors are the ticks Ticks Ticks are obligate ectoparasites of most types of terrestrial vertebrates virtually wherever these animals are found. Ticks are large mites and thus are arachnids, members of the subclass Acari... read more Dermacentor andersoni Dermacentor spp Of the 35 currently recognized Dermacentor spp, 19 inhabit temperate zones and 13 are found exclusively in the palearctic region. Among the tropical species, D nitens is of major veterinary... read more

(the wood tick), Amblyomma americanum Amblyomma spp More than half of the approximately 135 known Amblyomma species are endemic to the New World. Amblyomma ticks are large, three-host parasites. They have eyes and long, robust mouthparts. They... read more

(the American dog tick), and Chrysops discalis Horse Flies and Deer Flies Tabanus spp (horse flies) and Chrysops spp (deer flies) are large (up to 3.5 cm long), heavy bodied, robust dipterans with powerful wings and very large eyes. They are swift fliers. These flies... read more (the deer fly). Animal hosts of F tularensis holarctica are numerous, including lagomorphs, beaver, muskrat, voles, and sheep. Ticks, flies, fleas, and exposure to contaminated water sources are all associated with transmission of this subspecies, which has also been found to persist naturally in a water-associated amoeba.

Natural foci of infection exist in North America and Eurasia. Although found in every state except Hawaii, tularemia is most often reported in the southcentral and western USA (eg, California, Missouri, Oklahoma, South Dakota, and Montana).

Tularemia can be transmitted by aerosol, direct contact, ingestion, or arthropods. Inhalation of aerosolized organisms (in the laboratory or as an airborne agent in an act of bioterrorism) can produce a pneumonic clinical presentation. Direct contact with, or ingestion of, infected carcasses of wild animals (eg, cottontail rabbit) can produce the ulceroglandular, oculoglandular, oropharyngeal (local lesion with regional lymphadenitis), or typhoidal forms. Immersion in or ingestion of contaminated water can result in infection in aquatic animals. Ticks can maintain infection transstadially and transovarially, making them efficient reservoirs and vectors.

The clinical presentation of tularemia depends on the host species, subspecies of the bacteria, and route of infection. The incubation period is 1–10 days. Type A tularemia is particularly pathogenic for lagomorphs, with fatal infections also reported in cats and nonhuman primates. Sheep and cats may be subclinically infected or develop bacteremia, fever, and respiratory infection. Cats may also develop ulceroglandular or oropharyngeal disease, presumably through exposure to infected prey items. Clinical signs include:

Prostration and death may occur in a few hours or days. Sporadic cases are best recognized by signs of septicemia. Outbreaks in untreated lambs may have up to 15% mortality.

The most consistent lesions are miliary, white to off-white foci of necrosis in the liver and sometimes in the spleen, lung, and lymph nodes.

When individual animals present with consistent clinical signs of septicemic disease, generalized or acute lymphadenopathy, or pneumonia, tularemia must be considered a possible cause. Tularemia should also be ruled out when large numbers of sheep show typical signs during periods of heavy tick infestation or when large numbers of rodents or lagomorphs are found dead. Affected sheep should be evaluated for tularemia and tick paralysis Tick Paralysis read more , whereas the etiologic agents to consider in cats and small mammals should also include agents of plague Overview of Plague Plague, caused by Yersinia pestis, is an acute and sometimes fatal bacterial zoonosis transmitted primarily by the fleas of rats and other rodents. Enzootic foci of sylvatic plague exist in... read more

When tularemia is suspected, laboratory personnel should be alerted as a precaution to reduce the risk of laboratory-acquired infection. The infective dose required to transmit this pathogen is extremely low; thus, risk of infection during necropsy or to laboratory personnel is significant, and special procedures and facilities are essential.

Diagnosis of acute infection of tularemia is confirmed by bacterial culture and identification of the bacterium, serology, or PCR. Organisms can be readily isolated from necropsy specimens by use of special media using stringent personal protection protocols. A direct or indirect fluorescent antibody test, or tube agglutination test with a single titer of ≥1:80, is presumptive evidence of exposure, whereas a 4-fold increase in antibody titer between acute and convalescent serum specimens confirms acute infection. PCR can be used to confirm infection rapidly.

Because of the substantial sylvatic (wildlife and tick) component of the Francisella life cycle, control involves reducing arthropod infestations and limiting exposure to wildlife, for example by keeping cats and dogs indoors. In some jurisdictions, tularemia in animals is reportable to public health authorities.