A number of systemic diseases produce various lesions in the skin. Usually, the lesions are noninflammatory, and alopecia is common. In some instances, the cutaneous changes are characteristic of the particular disease. Often, however, the dermatosis is not obviously associated with the underlying condition and must be carefully differentiated from primary skin disorders. Some of these secondary dermatoses are mentioned briefly below and are also described in the chapters on the specific disorders.

Dermatosis may be associated with nutritional deficiency, especially of proteins, fats, minerals, some vitamins, and trace elements. However, this is uncommon in dogs and cats fed modern, balanced diets. Siberian Huskies, and occasionally other breeds, may develop a disease similar to parakeratosis in pigs and require additional zinc in their diet (elemental zinc at 2–3 mg/kg/day). Zinc-responsive dermatoses also have been reported in cattle, sheep, goats, and llamas and may be associated with either a higher individual requirement or a dietary deficiency. The latter may be precipitated by oversupplementation of calcium. A zinc-responsive dermatosis has also been reported in a dingo and a red wolf.

Dermatitis is sometimes seen in association with disorders of internal organs, such as the liver, kidneys, or pancreas. Hepatic parenchymal dysfunction has been associated with superficial necrolytic dermatitis (hepatocutaneous syndrome, diabetic dermatosis) in old dogs and rarely in cats. This has been associated with hypoaminoacidemia. The cutaneous lesions include erythema, crusting, oozing, and alopecia of the face, genitals, and distal extremities, as well as hyperkeratosis and ulceration of the footpads. The skin disease may precede the onset of signs of the internal disease. Histopathologic findings are diagnostic and include superficial perivascular to lichenoid dermatitis, with marked diffuse parakeratotic hyperkeratosis and striking inter- and intracellular edema limited to the upper half of the epidermis. Hyperglucagonemia has also been documented in dogs with this syndrome; however, dogs tend to have hepatic parenchymal dysfunction more commonly than glucagonomas. In dogs, therapy relies on IV or oral amino acid treatment or surgical removal of the glucagonoma. Skin fragility syndrome (excessive skin friability) in cats has been seen in association with pancreatic or hepatic neoplasia, hepatic lipidosis, or adrenal dysfunction. Pancreatic neoplasia has also been associated with crusting of the footpads and alopecia in cats. A generalized nodular dermatofibrosis syndrome in German Shepherds, and occasionally other breeds, associated with renal cystadenomas, cystadenocarcinomas, or renal epithelial cysts, has been reported. Histopathologic examination of the skin nodules reveals dense collagen fibrosis.

In dogs, dermatosis can develop as a result of endocrine dysfunction ( see Endocrine System Introduction Endocrine System Introduction et seq). In males with Sertoli cell tumors, bilateral alopecia and occasional pruritus with a papular eruption may be seen. Intact female dogs with hormonal imbalances are usually pruritic and have a papular eruption, mammary tissue enlargement, and frequent estrous cycles. The skin lesions of both disorders may begin in the inguinal or flank region and progress cranially. Dermatosis due to neutering is not common in dogs and cats; when it does occur, it is generally nonpruritic, with mild alopecia in the perineal or inguinal areas.

Dermatoses have been seen in hypothyroidism ( see Hypothyroidism in Animals Hypothyroidism in Animals Hypothyroidism is thyroid hormone deficiency. It is diagnosed by clinical features such as lethargy, weight gain, obesity, haircoat changes, and low serum thyroid hormone concentrations. Management... read more ). The skin lesions are characterized by diminished hair growth and bilaterally symmetric alopecia. The skin is dry, scaly, thickened, and sometimes cool to the touch. Pyoderma and seborrhea may occur. The margins of the pinna may develop excess scale. In rare cases, cutaneous myxedema develops.

Faulty production of hypophyseal hormones may rarely cause dermatoses. Hypopituitarism is characterized by alopecia, especially in the axillary regions and on the lateral thorax and abdomen. Hyperadrenocorticism also is manifest by skin changes such as hyperpigmentation, alopecia, seborrhea, calcinosis cutis, and secondary pyoderma. In cats, the skin becomes extremely friable. In diabetes mellitus, pruritus and secondary infection sometimes occur, especially in cats with generalized Malassezia sp infection. 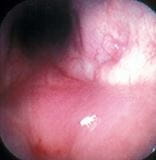 ) is a parasite found in the nasal cavity and sinuses of the dog. P caninum infection in dogs causes nonspecific clinical signs of the upper respiratory tract, such as sneezing, reverse sneezing, rhinitis, impaired scenting ability, and pawing at the muzzle.

Rarely, underlying neurologic disorders, especially in dogs, may manifest as cutaneous lesions. These include sensory neuropathies in English Pointers and Longhaired Dachshunds, cauda equina syndrome, pseudorabies, neoplasia of peripheral nerves, and syringomyelia and/or Chiari-like malformation of Cavalier King Charles Spaniels. Clinical signs generally include pruritus and/or scratching (sometimes "air scratching" in some cases of syringomelia/Chiari-like malformation) but also manifest as pain in the cauda equina syndrome and self-mutilation in the sensory neuropathies.

Treatment of all the above conditions depends on a specific etiologic diagnosis. Once this is established and managed, the skin lesions usually need only symptomatic care (eg, control of scratching) until they resolve with resolution of the primary disease.