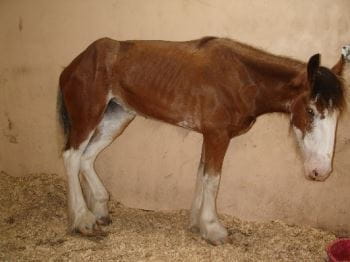 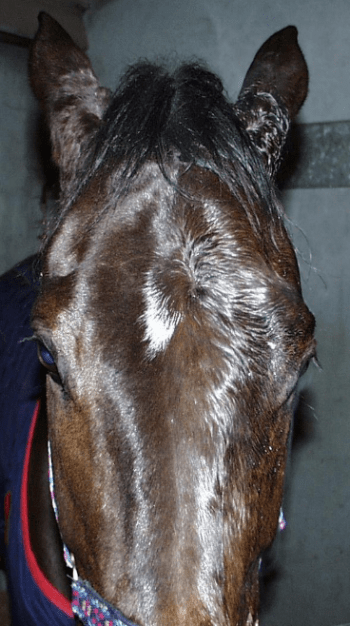 Grass sickness after eye drops, horse
Equine dysautonomia (grass sickness) is a disease characterized by degeneration of autonomic neurons in the brain, ganglia, and enteric nervous system. Clinical signs include GI hypomotility, ptosis, rhinitis sicca, anorexia, and cachexia. The etiology is unclear but is associated with access to green grass. Diagnosis is helped by the phenylephrine eye drop test and can be established with a rectal or small intestinal biopsy. There is no treatment other than supportive measures. Some mildly affected cases can survive.

A fatal dysautonomia of unknown etiology, equine grass sickness causes marked reduction of GI motility due to widespread degeneration within the autonomic nervous system. It is seen throughout northern Europe, and a few cases have been diagnosed in the USA in the same geographic area (Midwest) that has a high prevalence of canine dysautonomia.

Grass sickness is seen at any age after weaning and at any time of year, but incidence is highest in spring and in horses 2–7 years old. The majority of cases are younger horses kept solely at grass. All equidae appear susceptible. Acute, subacute, and chronic forms are recognized, categorized by whether death occurs within 24 hours, 7 days, and >1 week, respectively. However, chronic cases can survive for weeks or months, and some cases have recovered. The exact etiology is unknown, but the causal agent is associated with grass. A Clostridium botulinum toxin may be involved.

There is some evidence that supports an association with Clostridium botulinum type C/D, and an old study suggested that vaccination helped decrease the number of cases.

Horses are afebrile and show tachycardia, ileus, and colic. Patchy sweating and fine muscular fasciculations are often seen over the shoulders and flanks, and penile prolapse may develop. Within a few days of onset, horses adopt a "tucked up" stance, similar to that seen in equine motor neuron disease Equine Motor Neuron Disease Cervical spondylomyelopathy, also called cervical vertebral malformation-malarticulation and wobbler syndrome, is compression of the spinal cord caused by abnormal development of the cervical... read more

. In grass sickness, the horse may rest on one limb; that would not be seen in cases of equine motor neuron disease. In contrast to feline dysautonomia, pupillary light reflexes and tear production are normal.

Ptosis, with “droopy” eyelashes, tends to be prominent because of smooth muscle paresis. Rhinitis sicca (dry nose) commonly develops in chronic cases and is considered to indicate a poor prognosis. Affected horses often have dysphagia and esophageal dysfunction, which cause drooling, difficulty passing a stomach tube, nasal reflux of gastric contents, and pooling of barium contrast in the thoracic esophagus.

On rectal palpation, the mucosa is dry and tacky, and feces are scant and hard. Distended loops of small intestine and an impacted large colon are seen in the more acute cases. Secondary ileal dilation/impaction and displacement of the large colon can be confusing features. Cachexia can be profound in chronic cases; rapid weight loss is associated with a poor prognosis.

In acute cases, the stomach and small intestine are markedly distended with fluid (which can result in gastric rupture), and the large intestine is impacted. In chronic cases, the GI tract is usually empty. All forms may show linear ulceration of the esophagus and hard, tarry fecal balls. Neuronal degeneration of pre- and postganglionic sympathetic and parasympathetic neurons is characteristic. A specific distribution of chromatolytic autonomic and somatic lower motor neurons is found in the brain stem and spinal cord.

No reliable in vivo diagnostic test is available, but dysphagia, tachycardia despite few signs of pain, decreased GI tract motility, a tucked-up stance (chronic cases), and ptosis are useful features.

Administration of dilute (0.5%) phenylephrine to one eye should, within 20 minutes, result in marked decrease in ptosis (most easily seen as a decrease in the angle of the eyelashes to the head when viewed from the front).

Biopsies of ileal and rectal tissue (1-cm long, formalin-fixed biopsies preferred) can confirm the diagnosis when examined by a pathologist experienced with grass sickness lesions.

Postmortem confirmation of diagnosis depends on histopathologic examination of autonomic ganglia. The cranial cervical ganglia are the most accessible ganglia on postmortem examination and can be found in a fold of mucosal tissue in the caudal wall of the medial compartment of the guttural pouch. The CNS changes are typical but require a pathologist skilled in neuropathology.

A proportion of mildly affected (chronic) cases can survive with dedicated nursing care; a wide variety of feeds should be offered to encourage feed intake.

Acute and subacute cases have not survived and should be euthanized on humane grounds. Stabling at-risk stock for part of the day has been recommended.