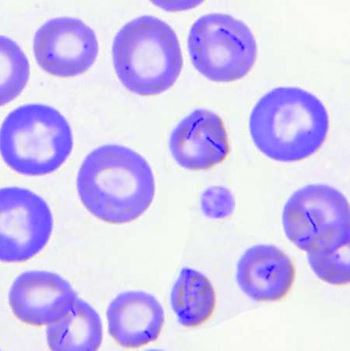 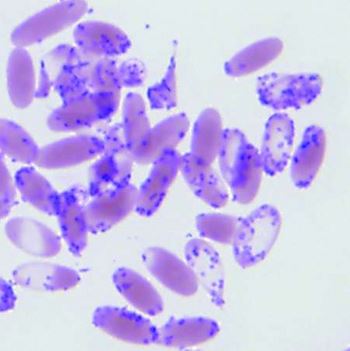 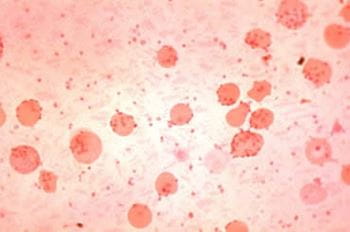 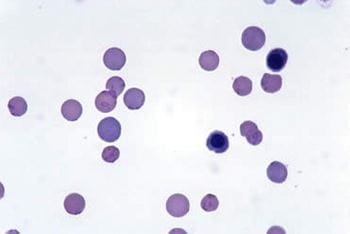 Hemoplasmas of Veterinary Importance
Hemoplasmas are bacteria in the genus Mycoplasma that lack cell walls and attach to erythrocytes of target hosts, potentially causing host immune-based anemia. Many infections are asymptomatic. Diagnosis can be based on microscopy or PCR. Antibiotics and supportive care are the usual treatments.

Hemoplasmas, or hemotropic mycoplasmas, are epierythrocytic parasites within the order Mycoplasmatales. Modern taxonomy provisionally accepts that the genus Mycoplasma now contains genera previously known as Haemobartonella and Eperythrozoon based on hemoplasmas' lack of a cell wall, use of the codon UGA to encode tryptophan, and 16S rRNA gene sequences. Those species for which full characterization based on bacterial culture is lacking are given the designation "Candidatus."

Hemoplasmas infect a wide variety of vertebrates throughout the world, including several reported to infect human beings. They have morphologic features such as rod, coccoid, and ring-shaped structures found individually or in chains on the red cell, and they stain gram-negative because of the lack of a cell wall. None of the hemoplasmas have been cultured in vitro. Hemoplasmas attach to the surface of the host's red cells and may, under certain conditions, penetrate the cell.

Hemoplasmas may be transmitted by transfer of infected blood (blood transfusion or use of contaminated needles, surgical instruments, or herd or flock management equipment) or via arthropod vectors such as lice Overview of Lice Numerous species of lice parasitize domestic animals. Lice are largely host specific, living on one species or several closely related species. Lice are obligate ectoparasites and depend on... read more , flies Overview of Flies Flies belong to the order Diptera, a large, complex order of insects. Most members of this order have two wings (one pair) as adults. However, there are a few wingless dipterans. Dipterans vary... read more , ticks Ticks Ticks are obligate ectoparasites of most types of terrestrial vertebrates virtually wherever these animals are found. Ticks are large mites and thus are arachnids, members of the subclass Acari... read more , and mosquitoes Mosquitoes Mosquitoes are members of the family Culicidae. Important genera include Aedes, Anopheles, Culex, Culiseta, and Psorophora. Although they are tiny, fragile... read more . Vertical transmission from mother to offspring has been reported in cats, swine, and camelids. Direct transmission, possibly associated with fighting, is suspected in cats and supported by studies reporting presence of hemoplasma DNA in saliva, on gingiva, and on claw beds of infected cats.

, but the severity varies greatly. Most animals develop asymptomatic infections, with more severe, acute anemias associated with certain hemoplasma strains, splenectomy, immunocompromise, concurrent infection (such as with feline leukemia virus Feline Leukemia Virus Disease Feline leukemia virus (FeLV) is one of the most common infectious causes of disease of cats globally. Infection with FeLV can cause a variety of clinical signs, impacting a cat's longevity... read more

M haemocanis causes acute hemolysis in dogs that are splenectomized, but infections are usually asymptomatic in healthy dogs.

M wenyonii infection in cattle is usually asymptomatic, but a syndrome of mammary gland and hindlimb edema, decreased milk production, fever, and lymphadenopathy has been described in young, nonanemic, primiparous heifers. Infection in young bulls has been reported to cause scrotal and hindlimb edema.

Hemoplasma infection in camelids can cause a severe hemolytic anemia in young crias.

The prevalence of chronic infection in sheep, pigs, and kennel-raised dogs is high, and outbreaks of acute disease have been reported in animals during research studies. Presence of hemoplasma infection may affect experimental results and lead to misinterpretation of data.

The hemolysis caused by hemoplasma infections is immune-mediated and typically extravascular, resulting in a regenerative anemia. Erythrocyte agglutination may be present, and Coombs’ test results are often positive in cats infected with M haemofelis. Splenectomized dogs with acute hemolysis due to M haemocanis may have agglutination, spherocytosis, and a positive Coombs’ test. Hypoglycemia secondary to glucose consumption by the bacteria has been reported in heavily parasitized pigs, sheep, llamas, and calves; however, rapid bacterial glycolysis in vitro may also cause artifactually decreased blood glucose concentrations.

Historically, diagnosis of hemoplasmas has been made based on detection of organisms on routine Wright-stained blood smears, on which they appear as small (0.5–3 mcm), basophilic, round, rod, or ring-shaped structures present on erythrocytes individually or in chains, or sometimes seen free in the background. However, sensitivity of the blood smear may be poor, because parasitemia in chronic infections can be cyclic, and organisms can disappear from circulation in as little as 2 hours. Hemoplasmas dissociate from erythrocytes and die after a variable amount of time in EDTA, hampering detection of organisms in aged samples. Specificity of the test is also poor if there are few organisms and if characteristic morphology isn't present to differentiate from stain artifact or other nonpathogenic structures.

PCR assays capable of discriminating among hemoplasmas have greatly enhanced diagnosis of these parasites and has led to identification of several new Mycoplasma species. PCR can be run on whole blood and aspirates of the spleen.

Treatment and Control of Hemotropic Mycoplasma Infections in Animals

For acute hemoplasma infections, tetracyclines (doxycycline, oxytetracycline) are the mainstay of treatment; enrofloxacin and marbofloxacin have also been effective against M haemofelis. Glucocorticoids may be useful to decrease erythrophagocytosis in cases of severe hemolysis because the primary mechanism of damage is immune-mediated targeting of infected host cells. Some animals may require blood transfusion, but animals must be carefully monitored because the parasite can rapidly infect transfused cells as well. Treated animals may remain carriers and may experience periodic clinical relapses with reemerging parasitemia if the animal is stressed or immunocompromised.

Once an initial infection is controlled, either naturally or after antibiotic treatment, protective immunity develops against repeat M haemofelis infection; how long this immunity will last and whether this applies to other hemoplasma infections is unknown.

Blood donors should be screened using PCR-based DNA assays to prevent transmission to transfusion recipients. Iatrogenic transmission can be avoided by using properly sterilized needles and equipment. Control of arthropod vectors is recommended, as is minimizing stress in managing herds and flocks.

Hemoplasma infections are typically species specific, except for M ovis, which infects both sheep and goats, and "Candidatus M haemolamae," which infects both llamas and alpacas. There are reports of human eperythrozoonosis from Inner Mongolia, China, but supporting evidence is not compelling. There have also been rare reports of hemoplasma infections in immunocompromised people in which molecular methods were used for confirmation. One report documented an HIV-positive human patient coinfected with Bartonella henselae and a hemoplasma genetically similar to M haemofelis. This individual owned five cats and had multiple scratch and bite wounds. All five cats were PCR positive for Bartonella spp and two were positive for M haemofelis, suggesting the possibility of zoonotic transmission. The coinfection of a veterinarian in Texas with B henselae and M ovis also has been reported.

In cats, hemotropic mycoplasmosis can produce a disease called feline infectious anemia (FIA), previously known as hemobartonellosis. M haemofelis (previously the Ohio strain, or large form, of Haemobartonella felis) is the most pathogenic organism causing FIA, and it can cause hemolytic anemia in immunocompetent cats. "Candidatus M haemominutum" (previously the California strain, or small form, of H felis) is the most common hemoplasma in cat populations worldwide, but it has not been clearly associated with disease in immunocompetent cats. "Candidatus M turicensis" has never been seen on blood smears, and its pathogenicity is not well understood. Both Candidatus species may be capable of inducing anemia in cats with underlying immunosuppressive disease, such as feline leukemia virus Feline Leukemia Virus Disease Feline leukemia virus (FeLV) is one of the most common infectious causes of disease of cats globally. Infection with FeLV can cause a variety of clinical signs, impacting a cat's longevity... read more

In the case of M haemofelis infection, an incubation period of 2–30 days is followed by anemia, with some cats developing cyclical changes in PCV that coincide with the appearance of large numbers of organisms on blood smears. In untreated cats, this acute phase lasts for 3–4 weeks, after which some cats may remain chronically infected despite normal or near normal PCV values. It has been suggested that recrudescence of anemia may occur when these chronically infected cats are subject to debilitating disease, stress, or immunosuppressive therapies.

Any anemic cat, especially one with an anemia showing evidence of regeneration (polychromasia and/or reticulocytosis), may be suspected of having FIA. The severity of clinical signs correlates with the rapidity of onset of anemia. Clinical findings include weakness, pallor of the mucous membranes, tachypnea, tachycardia, and occasionally collapse. Acutely ill cats may be febrile, and moribund cats may be hypothermic. Other physical examination abnormalities may include cardiac murmurs, splenomegaly, and icterus. In chronic or slowly developing cases, there may be normal or subnormal body temperature, weakness, depression, and weight loss or emaciation.

Laboratory confirmation has traditionally been based on identification of organisms in the peripheral blood using light microscopy, although M haemofelis is visible <50% of the time in acutely infected cats. PCR assays are available in many laboratories and are considerably more sensitive and specific than blood-smear evaluation.

Without treatment, one third of acutely ill cats may die. Treatment involves supportive therapies, such as oxygen and blood transfusions, as well as specific therapy with doxycycline (10 mg/kg/day, PO, for a minimum of 2 weeks). Because of the potential for esophagitis and esophageal strictures, administration of doxycycline hyclate preparations should be followed by administration of a bolus of several milliliters of water. Enrofloxacin (5 mg/kg/day, PO) is a suitable alternative to doxycycline. Treatment of PCR-positive, healthy cats is currently not recommended, because no regimen has yet been identified that completely eliminates the organism. Immunosuppressive dosages of glucocorticoids to suppress immune-mediated RBC injury may be used in cats that do not respond to antimicrobial therapy alone, or when primary immune-mediated hemolytic anemia is a possible cause.

Overview of Fluke Infections in Ruminants