Systemic and Pulmonary Hypertension in Dogs and Cats

Systemic hypertension is an increase in systemic arterial blood pressure. There are two major types: essential and secondary. Essential hypertension, which is idiopathic (primary) hypertension, though common in humans, is extremely rare in dogs and cats. Secondary hypertension results from a specific underlying disease. In dogs, the most common cause of hypertension is renal disease/failure; in cats, the most common causes are renal disease/failure and hyperthyroidism Hyperthyroidism in Animals Hyperthyroidism is characterized by hypermetabolism and high circulating thyroid hormone concentrations. Clinical features include weight loss despite a good appetite. Treatment depends on the... read more

The diagnosis of systemic hypertension is made by measuring systemic blood pressure. The most accurate assessment method is direct measurement via arterial puncture, which is impractical in most instances. The next-most-accurate method (although still often inaccurate) is indirect measurement using a Doppler probe to assess blood flow in an artery. Typically, the superficial palmar arterial branch of the radial artery in dogs and cats, distal to pressure cuff placement. This is usually on the forelimb, although the caudal limb and tail may be used.

Cuff width should be 30% of the circumference of the forelimb in cats and 40% of the forelimb circumference in dogs. Shaving the hair just proximal to the palmar metacarpal pad for application of the Doppler probe enables more accurate results. The hind limb can also be used, in which case the superficial plantar arterial branch of the caudal tibial artery is assessed. The disadvantage of Doppler blood pressure measurement is that only systolic blood pressure is reliably measured.

Blood pressure measurement is not a screening tool in veterinary medicine versus human medicine, except in patient populations that have a disease that causes systemic hypertension (eg, dogs with renal failure should be screened for systemic hypertension). Even in an animal with a disease that causes hypertension that has an increased blood pressure measurement, documenting end-organ damage (eg, the presence of hypertensive retinopathy) is recommended before treatment is started.

Dogs and cats with severe systemic hypertension often have no clinical signs. Acute blindness is the most common clinical sign. Retinal lesions (eg, retinal hemorrhage, retinal detachment, arterial tortuosity, focal or diffuse retinal edema) are very common in hypertensive cats. Blood tests may demonstrate abnormalities consistent with the cause of hypertension (eg, increased thyroxine [T4] concentrations in hyperthyroid cats, increased BUN and creatinine in animals with renal failure). Treatment should be initiated in animals with consistently measurable hypertension that are documented to have an underlying cause such as renal disease/failure and evidence of end-organ damage. Systemic hypertension in cats and dogs appears to be due to constriction of systemic arterioles, because only potent systemic arteriolar dilators seem to have a positive therapeutic effect. The treatment for systemic hypertension in cats is to administer amlodipine, telmisartan, or a combination of amlodipine and telmisartan. Other drugs, such as an ACE inhibitor, diltiazem, beta-blockers (eg, atenolol), and diuretics (eg, furosemide), are generally ineffective. In dogs, amlodipine and hydralazine are the only consistently effective drugs. Amlodipine and hydralazine can be very cautiously administered together in a dog that is refractory to both drugs alone. Some clinicians have had success with prazosin in dogs. Phenoxybenzamine is expensive but can also be effective in dogs. It is most often used in dogs with a pheochromocytoma; however, it can also be effective in dogs with systemic hypertension due to other causes. 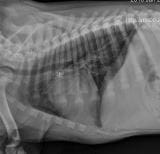 Clinical signs of severe pulmonary hypertension are typically those of right heart failure (ascites, exercise intolerance) and episodic collapse or syncope, usually after exercise or excitement. Physical-examination findings may include evidence of ascites in dogs, and jugular vein distention and pulsation. Definitive diagnosis requires direct measurement of pulmonary artery pressure (rarely performed), or estimation of pulmonary pressures by Doppler echocardiography (by measuring the velocity of a tricuspid or pulmonary regurgitant jet). Echocardiography may demonstrate flattening of the interventricular septum in systole, right ventricular chamber dilation and/or free wall thickening, and right atrial enlargement.

Treatment of pulmonary hypertension depends on the cause. In heartworm disease, successful clearance of adult worms from the pulmonary arterial vasculature often results in a decrease in pulmonary artery pressure and resolution of right heart failure. Dogs with a right-to-left shunting patent ductus arteriosus can live for several years despite severe pulmonary hypertension, if their polycythemia Erythrocytosis and Polycythemia in Animals Erythrocytosis is a relative or absolute increase in the number of circulating RBCs, resulting in a PCV increased above reference intervals. Polycythemia is frequently used synonymously with... read more is adequately controlled. Sildenafil (1–3 mg/kg, PO, every 8–12 hours), a phosphodiesterase type 5 inhibitor, is the most effective drug to lower pulmonary artery pressure and improve clinical signs in dogs with pulmonary hypertension. It is warranted primarily in dogs with clinical signs due to pulmonary hypertension, most commonly syncope and right heart failure. In these patient populations, administration of sildenafil often will decrease or stop syncope and enable easier control of ascites. Exercise tolerance may be improved. There is limited experience with tadalafil (1 mg/kg, PO, every 12–24 hours); in theory, however, it should have the same effects. Pimobendan decreases pulmonary artery pressure in dogs with pulmonary hypertension secondary to left heart failure. Identifying and treating the underlying disease offers the best chance for a successful longterm outcome; however, such identification and treatment are rare.