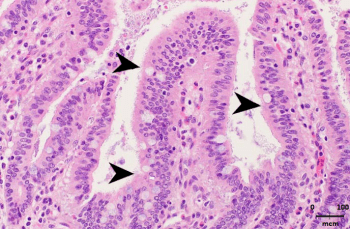 Enteric colibacillosis is a common disease of nursing and weanling pigs caused by colonization of the small intestine by enterotoxigenic strains of Escherichia coli (ETEC). Colonization of the small intestine by ETEC strains typically results in a severe, watery diarrhea and dehydration. Disease is typically confirmed via a combination of lesion assessment, cultural confirmation, and genotyping of bacterial isolates.

Etiology and Pathogenesis of Enteric Colibacillosis in Pigs

Certain strains of E coli possess fimbriae that allow them to adhere to or colonize the absorptive epithelial cells of the jejunum and ileum. The common antigenic types of fimbriae associated with pathogenicity are F4 (K88), F5 (K99), F6 (987P), F18, and F41. Pathogenic strains produce varying combinations of enterotoxins that act locally to induce fluid and electrolyte secretion into the intestinal lumen, resulting in diarrhea, dehydration, and metabolic acidosis. Neonatal colibacillosis is commonly caused by F4 and, to a lesser extent, F5, F6, and F41 strains. Postweaning colibacillosis is most often associated with the F4 or F18 strain. There is also a genetic susceptibility component, because not all pigs express receptors for all fimbrial adhesins.

Dehydration and distention of the small intestine, with yellowish, watery to slightly mucoid fluid, is characteristic. The colon often contains similar fluid. The stomach is typically dilated and may be full of feed. Pigs dying suddenly may have patchy cutaneous erythema. Histologically, the villi are usually of normal length and have many small coccobacilli adhered to the absorptive enterocytes.

Diagnosis of Enteric Colibacillosis in Pigs

Confirmation of enteric colibacillosis is based on histologic observation of coliform colonization of small-intestinal brush borders and isolation of the organism from the small intestine. F4 and F18 strains are strongly hemolytic on blood agar; however, not all hemolytic E coli are pathogens. Genotyping PCR assays are available to detect fimbrial type and the presence of enterotoxin genes.

Treatment and Control of Enteric Colibacillosis in Pigs

Disorders and Diseases of Potbellied Pigs

Bacterial and Mycotic Diseases of Rabbits