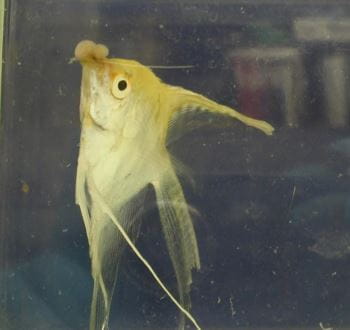 Neoplastic diseases similar to those found in other animals are found in fish. Their incidence frequently is higher in some geographic areas and in certain species. Some tumors are genetically mediated, such as the malignant melanoma of the platy-swordtail cross, and possibly the pseudobranch tumor of cod, thyroid tumors, malignant lymphosarcoma of northern pike, and fibromas or sarcomas of goldfish. Liposarcomas have been reported in captive-bred clownfish, and pigmented tumors of unknown origin have been seen in wild Hawaiian marine butterflyfishes, Chaetodon miliaris and C multicinctus. Both species are popular in the marine aquarium hobby. Although the reported incidence of tumors in sharks, skates, and rays is low, neoplasia does occur.

Gonadal tumors are important neoplastic disorders of fishes and have been reported in koi and northern pike. Typically, fish present with a swollen abdomen, and, depending on the severity of disease, there may be significant loss of condition. The presence of a mass can be confirmed with ultrasound. Biopsy of tissue may not offer a clear diagnosis. Laparotomy of affected fish often reveals a circumscribed mass of gonadal tissue. Fish that are not excessively debilitated are excellent surgical candidates for removal of the mass.

Viruses, especially retroviruses, have been associated with neoplasia in fishes. Two examples of viral-induced neoplasia have occurred in tropical fishes. Viral particles have been found in fibromas on the lips of freshwater angelfish. Debulking the tumor can allow affected fish to feed normally. Bicolor damselfish neurofibromatosis, a fatal disease, was reported in 1991 in wild Stegastes partitus found on the reefs of south Florida; it is believed to be a viral-induced tumor. Although not reported in captive bicolor damselfish, it has the potential to occur.