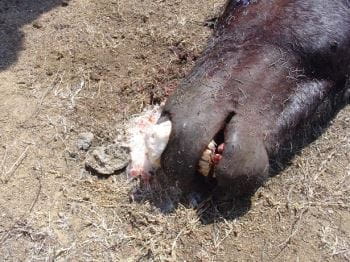 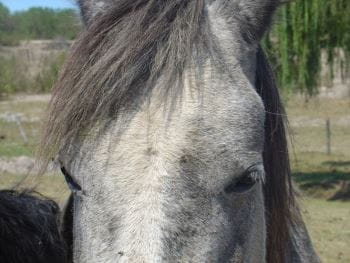 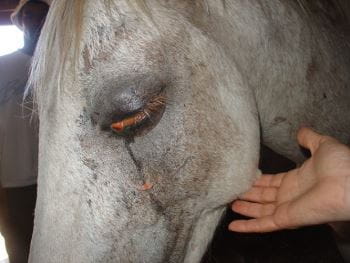 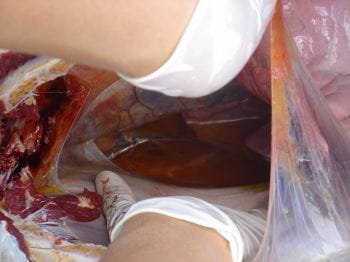 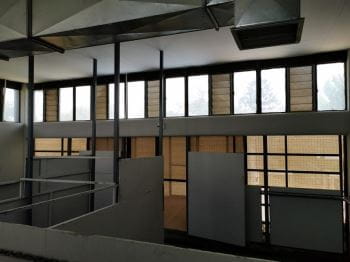 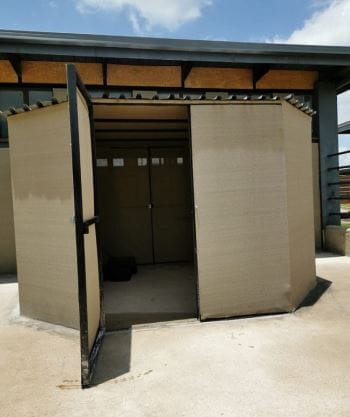 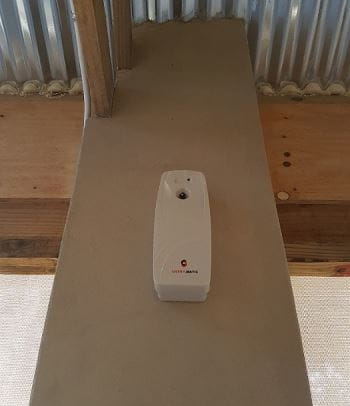 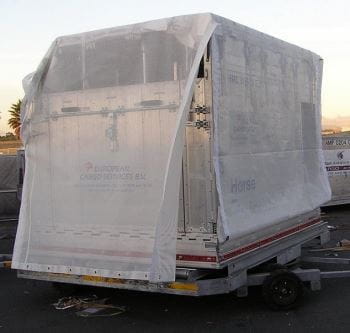 Vector control: jet stall
African horse sickness (AHS) is a life-threatening hemorrhagic disease of equids characterized by respiratory and circulatory impairment. It is caused by the AHS virus (AHSV), genus Orbivirus, family Reoviridae. It is transmitted by midges (Culicoides spp) and endemic to sub-Saharan Africa. Diagnosis is by real-time PCR assay. Control is centered around vaccination.

African horse sickness (AHS) is a reportable, noncontagious, nonzoonotic, arthropod-borne viral disease of equids that is endemic to sub-Saharan Africa. It can be acute, subacute, or subclinical and is characterized by clinical signs and lesions associated with respiratory and circulatory impairment. African horse sickness is a notifiable disease listed by the World Organisation for Animal Health (OIE) due to the high mortality rate and potential for rapid spread. Treatment is largely supportive, with the main focus on preventive medicine aimed at vector control and vaccination to prevent further transmission of the disease. Diagnosis is aimed at antigen detection, with real-time PCR assay the test of choice in endemic countries.

African horse sickness is caused by the AHS virus (AHSV), a segmented, nonenveloped double-stranded RNA virus 55–70 nm in diameter and of the genus Orbivirus in the family Reoviridae. Horses are the most susceptible equids, with AHSV infection potentially leading to case fatality rates of up to 90% in naive populations. Donkeys and mules are also susceptible but generally develop a milder form of disease. Zebra are highly resistant to disease. Given the importance with regard to international trade and movement of horses, AHS is the only equine disease for which the OIE has introduced guidelines for members to be able to apply for official recognition of disease-free status.

There are nine immunologically distinct serotypes of AHSV (serotypes 1 to 9).

The virus is transmitted by hematophagous arthropods of the Culicoides spp. Subsequently the virus is most prevalent at the time of year and in areas where the vector is most abundant, namely in late summer rainfall areas of sub-Saharan Africa. Heavy rainfall followed by hot, dry weather favor the occurrence.

African horse sickness is now considered endemic to tropical and subtropical areas of Africa, south of the Sahara, from Senegal in the west to Ethiopia and Somalia in the east and extending in the south to South Africa. Epidemics of AHS have extended into new territories in the past, namely in Egypt, Syria, Jordan, Lebanon, and Palestine in 1943–1944, in the Middle East and Southwest Asia (Cyprus, Turkey, Lebanon, Iran, Iraq, Syria, Jordan, Palestine, Pakistan, and India) in 1959–1960 with the death of over 300,000 equids and in North Africa and Spain in 1965–1966. In 1965, AHS was reported in Morocco spreading to Algeria and Tunisia and crossing the strait of Gibraltar into Spain in 1966. These latter outbreaks were all caused by AHSV serotype 9. In 1987, a second AHS epizootic occurred due to serotype 4 virus in Spain caused by the importation of infected subclinical zebra from Namibia. Although extensive control measures were taken, AHSV successfully spread in 1988 to southern Spain and in 1989 to Portugal and Morocco. Spain and Portugal were finally cleared from AHSV in 1991 (the last clinical cases being reported in 1990).

Outbreaks continue to occur in endemic regions of southern and eastern Africa, and, since 2007, AHSV serotypes 2 and 7 have become prevalent in central and western Africa as well, where, historically, outbreaks were predominantly due to serotype 9. In South Africa, outbreaks occur every year throughout the year with the exception of the AHS-controlled area of the southern Cape, with all 9 known serotypes occurring.

Culicoides spp are the principal vectors of all 9 known serotypes of AHSV, with C imicola considered the most important. The virus has also been isolated from the dog tick Rhipicephalus sanguineus sanguineus, and the camel tick, Hyalomma dromedarii, during the winter in southern Egypt, where the disease is endemic; however, the relevance in terms of transmission in these two tick species must still be investigated. Direct transmission has been shown in dogs after ingestion of infected horse meat, but it has further been shown that vector transmission to dogs is likely to also occur. However, it is generally considered that dogs and other large carnivores, ticks, and mosquitoes play a small role in the epidemiology of AHS.

African horse sickness is primarily characterized by pyrexia, edema of the lungs, pleura, and subcutaneous tissues as well as petechiae and widespread hemorrhage. The incubation period is, on average, between 5 and 7 days. The viremic period generally corresponds with the onset of fever and can persist for anywhere between 2 and 14 days, but possibly longer. Clinical forms of AHS include peracute pulmonary, subacute cardiac, and mixed as well as subclinical (horse sickness fever).

The pulmonary form is known colloquially in South Africa as "dunkop," meaning thin head. This form is a peracute infection, with clinical signs being pyrexia, congestion, dyspnea, and death due to severe pulmonary edema. Large amounts of frothy, serofibrinous fluid is often seen coming from the nostrils. The case fatality rate for these cases is approximately 95%. This form is predominantly seen in naive animals that are infected, such as foals that have lost colostral immunity, or unvaccinated animals.

The cardiac form, also known as "dikkop," meaning thick head, is characterized by subcutaneous edema and consequent swelling of the supraorbital fossae of the horse, giving the appearance of a swollen head. Fever and mucous membrane congestion are normally the initial clinical signs, followed a few days later by the supraorbital swelling and subcutaneous edema of the head and neck. This can be fairly severe and dramatic in appearance. The presence of petechiae on mucous membranes is normally a poor prognostic indicator. The case fatality rate for these cases is normally approximately 50%.

The acute, or mixed, form is therefore a mixture of the pulmonary and cardiac forms, and consequently both lung involvement as well as the externally visible subcutaneous edema and supraorbital swelling is normally seen. This form is probably the more common form seen in South Africa.

Horse sickness fever is a milder form of disease and is normally characterized by a fever for a few days, together with depression only, followed by full recovery. This is a syndrome most likely seen in immunized animals as well as occasionally in donkeys and zebra.

Mortality depends on the virulence of the particular AHSV strain and susceptibility of the host. In naive populations of horses, mortality may reach 90% in epidemics.

Subclinical AHSV infection has occurred in endemic countries in zebra and donkeys but more recently has been confirmed in horses as well. It is mostly likely to occur in previously well-immunized animals but has also occurred in naive animals suspected to have some innate resistance. This discovery has important implications with regard to movement and disease control.

In endemic areas, clinical signs and postmortem lesions may lead to a presumptive diagnosis; however, they are not specific for AHS. Laboratory confirmation by agent identification is therefore essential for definitive diagnosis. Determination of the serotype is also advised and is important for control measures. Historically, viral isolation with serotyping was used to provide a definitive diagnosis; however, this technique has been replaced with the development of real-time PCR assays that are much faster and more sensitive. The OIE has validated and published the procedure for two group-specific PCR assays, the Aquero (2008) and Guthrie (2013) methods. Whole blood should be collected in EDTA tubes at the peak of fever, if possible, and transported (at 4°C) to the laboratory. Spleen and lung samples collected from recently dead animals should be transported on ice (also at 4°C).

Serotyping of AHSV previously relied on virus neutralization tests using type-specific antisera, which can take longer than 5 days to process and requires a viral isolate. The recent development of type-specific RT-PCR assays can now confirm the serotype of an AHSV within a few hours.

Serologic analysis is rarely used for diagnostic purposes anymore in endemic areas, because many horses have not mounted an immune response at the time of sample collection or death. Furthermore, in areas where vaccination is routinely used, or endemic circulation of the virus is present, serologic results can be difficult or impossible to interpret. Serologic analysis, therefore, remains an aide in surveillance and screening methods in naive populations or nonendemic countries, where the virus is not present. Serologic tests most commonly used include serum neutralization tests and ELISA.

, or theileriosis Theileriases Theileriases are a group of tickborne diseases caused by Theileria spp. A large number of Theileria spp are found in domestic and wild animals in tick-infested areas of the Old World. The most... read more .

Currently, there is no specific curative treatment for animals with AHS except for supportive treatment aimed at cardiac and pulmonary support, rest, and good, general husbandry. For this reason, most efforts are aimed at prevention of infection and most importantly prevention of introduction of infected equidae from AHS risk areas to AHS-free areas or countries. To this end, the OIE Terrestrial Animal Health Code have published recommendations on control measures that should be implemented by infected exporting countries to export horses. These include, in brief, vector-protected quarantine, vaccination control, and testing prior to export.

Vaccination remains the main form of AHS control in endemic countries. Live-attenuated vaccines are commercially available, and these are typically based on cell culture–attenuated viruses and generally provide good, but not absolute, protection. Annual revaccination is recommended in regions where these vaccines are used. There are, however, increasing concerns regarding use of live-attenuated AHSV vaccines because of their proven potential for reversion to virulence, capacity for transmission by vector Culicoides midges, and reassortment of their gene segments with other vaccine and field strains of virus, leading to the creation of novel virus progeny and outbreaks. Furthermore, the live vaccines lack the capability to differentiate between vaccine and field virus infection, leading to diagnostic complications in outbreaks in endemic areas where vaccination has occurred.

Inactivated or recombinant vaccines (eg, subunit, vectored, or virus-like particle–based vaccines) could avoid these potential complications and would likely be used after incursion of AHSV into previously unaffected regions. However, they are not currently commercially available, and more development and research is needed regarding the efficacy and longevity of immunity to take the concept forward.

In endemic areas, vaccination alone is not fully effective in the control of AHS, and management precautions need to be implemented. Stabling during the peak vector activity periods (especially before sunset to after sunrise) would decrease the risk of transmission because the main Culicoides spp responsible (C imicola) do not readily enter buildings. Stables can further be protected by covering all stable openings with a fine-gauge shade cloth impregnated with insecticides and repellents. Double-door systems, positive pressure ventilation, and automatic insecticide dispensers are all used in endemic areas to isolate horses from the vector.

Topical insect repellents and insecticides applied to the horse and to stable buildings are also effective in preventing insects from biting. Permethrin products are effective as insecticides, and products with 15% DEET are shown to be effective repellents of the responsible Culicoides spp.

Flies and Mosquitoes of Horses