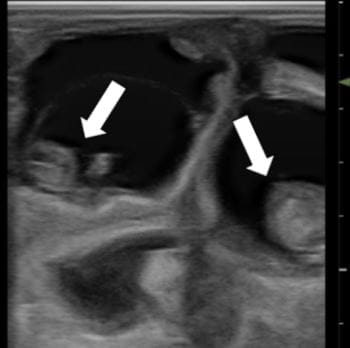 Pregnancy determination in does is commonly performed using real-time ultrasonography to visualize the presence of an embryo/fetus and placentomes within the uterus. Transabdominal ultrasound is quick and reliable and can detect pregnancy as early as 30 days, though it is most accurate after 45 days gestation. If possible, does should be fasted from food (12 hours) and water (4 hours) to improve speed and accuracy when performing ultrasonography in large herds. Transrectal ultrasound is more difficult and time consuming although it can diagnose pregnancy as early as 20 days. Ultrasonography can be used to count embryos/fetuses most accurately up to 85 days gestation, which is important when managing does prone to pregnancy toxemia Pregnancy in Goats in late gestation. Fetal sexing may be performed by skilled ultrasonographers between days 55 and 70 of gestation and is more accurate in singles versus multiples. Radiography can be used to detect pregnancy with 100% accuracy after day 70 and can detect the number of kids after day 75, though is not routinely performed because of impracticality and cost.

The estrone sulfate test, performed on plasma or urine, is another method to determine pregnancy. Between 15 and 20 days after conception, the level of estrone sulfate, a conjugated estrogen produced by the conceptus, increases substantially and stays increased throughout pregnancy. Most commercial laboratories recommend waiting until 50–60 days gestation to test does to ensure accurate results. Higher concentrations of estrone sulfate have been reported in does carrying twins or triplets than in those bearing a single fetus. Abortion, fetal death, or embryonic resorption cause the estrone sulfate levels to drop; therefore, the test also is a useful measure of conceptus viability.

Pregnancy-specific protein B (PSPB), also known as pregnancy-associated glycoprotein, is produced by the placenta and can be detected in serum or plasma of pregnant does via ELISA at least 25–30 days after breeding. Owners may choose to submit this test themselves after observing nonreturn to estrus in bred does. Concentrations of PSPB are reportedly lower in does carrying singletons versus multiples. Therefore, grouping does by PSPB levels may be useful when managing does in late gestation. However, because of the long half-life of PSPB, false positives may occur when fetal death has occurred within the last 15 days.

Hydrometra, or pseudopregnancy, is well documented in goats, although its cause is largely unknown. Aseptic fluid accumulates within the uterus and is accompanied by high peripheral concentrations of progesterone due to a failure of luteolysis. Approximately 50% of pseudopregnancies may result from early embryonic death at ≤40 days of gestation. An additional mechanism involves spontaneous persistence of the corpus luteum, which occurs more commonly in older goats, does bred out of the natural breeding season, or after induced ovulation. The diagnosis can be made by excluding pregnancy coupled with the presence of clinical signs.

Hydrometra can be treated with prostaglandin to lyse the corpus luteum, and does may be able to conceive again if diagnosed and treated early. However, if the condition persists or recurs, the chances of future conception decline, and does should be culled. Other reported causes of hydrometra in older does include cervical adhesions that develop after a dystocia and that prevent normal drainage of fluid or neoplasia. These animals will not respond to prostaglandin administration and have a poor prognosis for fertility.

Abortions in goat herds are relatively common and have severe economic implications. Diagnostic evaluations should be performed when abortions exceed 5% of the total number of pregnant animals in a herd or if several does abort within a short period of time. Chlamydiosis (Chlamydia psittaci), toxoplasmosis Toxoplasmosis in Animals Toxoplasmosis is an important zoonotic protozoal infection worldwide. All homoeothermic animal species may be infected. Infection is generally asymptomatic and chronic in immunocompetent individuals... read more (Toxoplasma gondii), campylobacteriosis Overview of Enteric Campylobacteriosis Campylobacter spp are spiral, microaerobic, gram-negative bacteria that cause gastroenteritis in people and animals. Several Campylobacter spp are zoonotic. Many domestic animals... read more

(Campylobacter fetus fetus), and Q fever Overview of Coxiellosis Coxiellosis is a zoonotic bacterial infection associated primarily with parturient ruminants, although domestic animals such as cats and a variety of wild animals have been identified as sources... read more (Coxiella burnetii) are commonly identified infectious causes of goat abortions Abortion in Goats Also see Management of Reproduction: Goats. Noninfectious causes of abortion in goats include plant toxins, such as broomweed or locoweed poisoning; dietary deficiencies of copper, selenium... read more in the US. Placental lesions are commonly observed with these pathogens due to the development of placentitis. If congenital defects, such as arthrogryposis, are observed, then viruses (eg, Cache Valley fever Akabane and Related Simbu Serogroup Virus Infections in Ruminants Akabane and related Simbu serogroup viruses are transmitted to ruminants by Culicoides midges. They cause congenital abnormalities of the CNS and musculoskeletal system in ruminants.... read more , border disease Border Disease Border disease is observed in young ruminants exposed to border disease virus during gestation. Surviving lambs demonstrate failure to thrive, a long hair coat, and tremors, giving rise to the... read more , bluetongue Bluetongue in Ruminants Bluetongue is a viral disease of ruminants worldwide. Clinical signs in sheep result from vascular endothelial damage, including edema of the muzzle, tongue, and coronary bands. Diagnosis is... read more viruses) and toxic plants (eg, Veratrum californicum) should be suspected. The fetus and placenta should both be submitted to a diagnostic laboratory. Paired serum samples should be obtained from the doe and stored appropriately, in case serology is indicated. A thorough history, including nutrition and any recent changes in husbandry, should be taken to aid in diagnostic evaluation and management.

Prevention of abortions and prevention of infertility are best achieved by maintaining low stress herds and implementing appropriate biosecurity Biosecurity of Animals The tenets of biosecurity have been long recognized by veterinarians. However, throughout the past decades, interest in biosecurity as a scientific discipline has surged because of 1) disease... read more measures. New animals should be isolated for 2–3 weeks before introducing them to the herd. Vaccinations against Chlamydia and Campylobacter spp may be incorporated into herd health protocols if necessary. However, these vaccinations only minimize losses and do not completely prevent infections. Though previous strategies to reduce likelihood of abortions involved the prophylactic administration of feed-grade tetracyclines, this practice had minimal efficacy and is now restricted with the implementation of the veterinary feed directive The Veterinary Feed Directive (VFD): Antimicrobial drug factors include mechanism of action, drug disposition, adverse effects and toxicity, and the importance of increasing resistance. All veterinarians should take particular... read more .

Pregnancy in Goats
Others also read

Pregnancy Toxemia in Sheep and Goats