Premature Separation of the Placenta 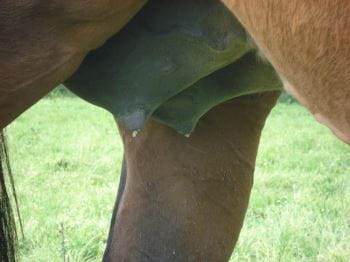 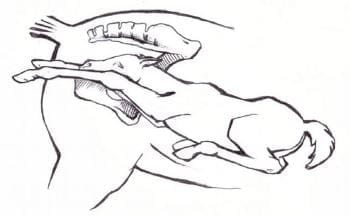 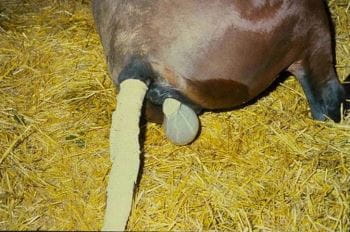 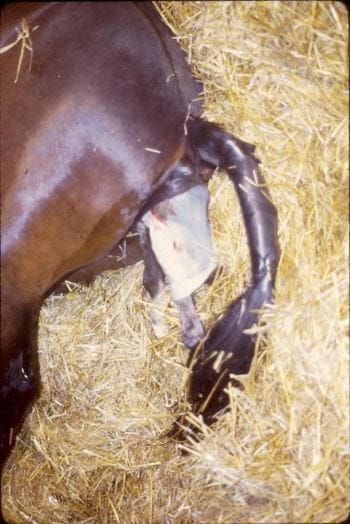 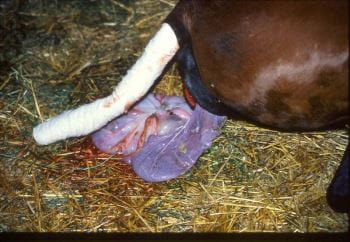 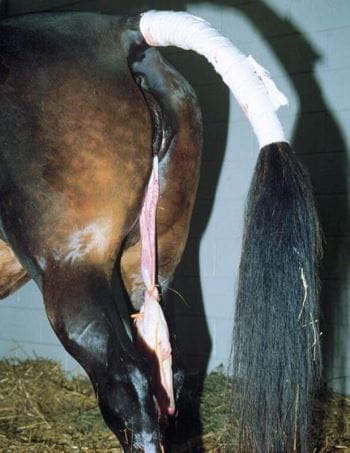 Maintaining the pregnant mare in the foaling location for 3–4 weeks before the expected foaling date will enhance the mare's immunity against pathogens present in the environment. Antibodies will be sequestered in colostrum for passive immunity in the newborn. Quality of colostrum will be improved by administering booster vaccinations 4–6 weeks before the mare's due date (also see Vaccination in Breeding Horses Vaccination in Breeding Horses Vaccination programs should follow a continuous, year-round schedule and consider local health problems. Vaccination against rhinopneumonitis should be performed at 5, 7, and 9 months of gestation... read more ).

Mares benefit from foaling outdoors on turf, weather permitting. However, if climate or management conditions favor foaling indoors, foaling box stalls should be large (at least 3.5 × 3 × 3.5 m). The foaling area should have good ventilation and be well bedded with clean, dry straw. The walls should be solidly constructed and free of sharp edges. Regardless of location, the mare should be observed without disturbance.

Evaluation of the premonitory signs of parturition is useful but does not permit precise prediction of the time of delivery. The mammary gland starts developing 3–6 weeks before foaling and distends with colostrum in most mares 2–3 days before parturition. Colostrum may drip from the teats and dry to form a waxy material at each teat orifice. This “waxing” develops in ~95% of mares 6–48 hours before foaling, but in some cases, it is not seen at all or it may precede parturition by many days. Before the mare foals, the calcium and potassium content of udder secretions increase, and the sodium content decreases. Water hardness chemical tests have been used to measure these in mammary gland secretions to predict parturition.

If a mare has had a vulvoplasty (Caslick operation) during pregnancy, an episiotomy must be performed ~2 weeks before parturition.

Stages of Parturition in Horses

It is critical to understand the normal progression of events during parturition. Abnormal events can then be identified and intervention provided as needed. Parturition is divided into 3 stages.

Stage I is characterized by signs of abdominal discomfort and restlessness due to uterine contractions. Patches of sweat on the flank and behind the elbows usually appear a few hours before foaling. The uterine contractions increase in frequency and intensity, causing the fetus to engage into the cervix and pelvic canal. The fetus rotates from a dorsopubic to a dorsosacral position before expulsion. Mares may roll during the first stage, which is thought to facilitate rotation of the fetus.

Increasing pressure in the uterus causes the chorioallantois to protrude through the internal os of the cervix. The chorion over the cervix is smooth—it does not have microvilli and is referred to as the cervical star. The chorioallantois usually ruptures at the cervical star, and the release of the tea-colored allantoic fluid marks the end of the first stage of parturition. In lay terminology, this event is referred to as the mare "breaking her water."

Stage II starts with the rupture of the chorioallantois and ends when the fetus is expelled. Second stage labor usually lasts 15–30 minutes. When the fetus engages the cervix, the Ferguson reflex occurs and stimulates the mare to have abdominal contractions. The allantoic fluid lubricates the canal, facilitating expulsion of the amnion and fetus. Vaginal distention causes release of oxytocin and further myometrial and abdominal contractions. The amnion appears at the vulvar lips as a whitish, fluid-filled membrane. The straining efforts of the mare consist of 3 to 4 strong contractions, followed by a short period of rest. During the actual expulsion of the foal, the mare usually assumes lateral recumbency with all 4 limbs extended.

The foal is normally delivered in an anterior, longitudinal presentation and dorsosacral position with the head, neck, and forelimbs extended. One front hoof of the foal usually precedes the other hoof by ~15 cm, facilitating passage of the elbows and shoulders through the pelvic canal. The foal is usually born with the umbilical cord intact and covered by the amnion, which is ruptured by movements of the mare or foal. If amnion remains over the foal’s nose, an attendant should remove it to prevent suffocation. If left undisturbed, the mare may lie for some time with the foal’s hindlimbs in the vagina. If the foal has not been delivered within 30 minutes of the rupture of the chorioallantois and release of the allantoic fluid, obstetric intervention is indicated.

Stage III involves expulsion of the fetal membranes. Normally, the fetal membranes pass rapidly (within 3 hours) after delivery of the foal. The weight of the amnion and cord may help the chorion separate from the endometrium. Progressive traction by the amnion and moderate uterine contractions originating at the tip of the horn cause complete separation of the chorioallantois, which may become inverted during the process. The mare may stand with the amnion hanging from the vulva at the level of the hocks or below. If the mare kicks at the hanging membranes, endangering the foal, the exposed membranes should be tied in knots to shorten the length to above the hocks.

If the fetal membranes have not been passed by 3 hours after parturition, oxytocin (20 IU, IV or IM) should be administered at 15- to 30-minute intervals until they pass. If fetal membranes are still retained at 8 hours after foaling, therapy for retained placenta Retained Fetal Membranes in Mares Equine fetal membranes are normally expelled within 3 hr after parturition, but expulsion may be delayed for 8–12 hr or even longer without signs of illness. The cause of retention of fetal... read more should be instituted.

Premature Separation of the Placenta in Parturition in Horses

Normally, the translucent white amnion appears first at the vulvar lips during the expulsion stage of labor. Premature separation of the placenta is characterized by the appearance of the bright red, velvety, intact chorioallantois with a central, tan, avillous, star shape between the vulvar lips before the foal is delivered. The presence of the chorion at the vulvar lips indicates that it has separated from the endometrium before the foal is able to breathe spontaneously. The chorioallantois must immediately be ruptured and the foal manually delivered, or the foal will asphyxiate. The severity and duration of hypoxia that results determines the severity of neurologic abnormalities displayed by the foal (peripartum asphyxia or hypoxic ischemic encephalopathy Neonatal Encephalopathy Neonatal encephalopathy (NE) is a common, noninfectious CNS disorder of neonatal foals, resulting in clinical signs such as lethargy, inappropriate behavior, seizures, and other neurologic deficits... read more .