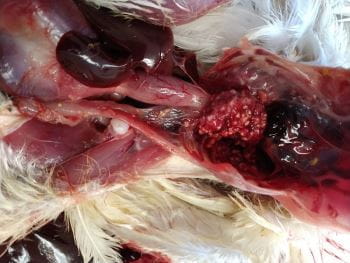 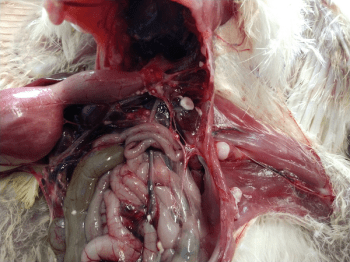 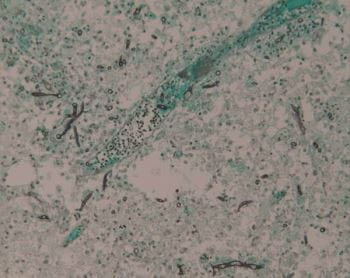 GMS-stained cerebellar histomicrograph
Aspergillosis is most often a respiratory infection in chickens and turkeys. It less often affects a wide range of other domestic and wild birds. Sick birds may display respiratory distress, suppressed growth, and general unthriftiness. Diagnosis is made through observation of granulomas, most typically in the respiratory tissues, and can be confirmed through culture or histopathology. There is no treatment for aspergillosis.

Aspergillosis is a disease, usually of the respiratory system, of chickens, turkeys, and less frequently ducklings, pigeons, canaries, geese, and many other wild and pet birds. In chickens and turkeys, the disease may reoccur on some farms; in wild birds, it appears to be sporadic, frequently affecting only individual birds. Severe outbreaks usually occur in birds 7–40 days old. (Also see Aspergillosis Aspergillosis Aspergillosis is caused by several Aspergillus spp, especially A fumigatus and A terreus. A niger, A nidulans, A viridinutans, A flavus, and... read more

Aspergillus fumigatus is a common cause of aspergillosis. However, several other mold species may be incriminated, such asA flavus,A niger,Rhizopus spp,Mucor spp, and on rare occasions, Penicillium spp.

High mortality rates can be seen in chicks and poults that inhale large numbers of spores during hatching or when placed on bedding contaminated with mold spores. In older birds, infection is caused primarily by inhalation of spore-laden dust from contaminated litter, feed, or dusty range areas. In facilities with reoccurring infection, the air handling system(s) should also be investigated as a source of contamination.

The most common clinical signs of aspergillosis include:

Less frequently, a neurologic form might present, with clinical signs that include torticollis and tremors. In chickens and turkeys, the lungs and airsacs are most frequently involved. Pulmonary lesions are commonly characterized by white to yellow plaques and nodules a few millimeters to several centimeters in diameter. In rare cases, birds may present with diffuse pulmonary congestion only. Occasionally, mycelial masses may be seen within the air passages on gross examination.

Common histopathologic lesions can include granulomatous pneumonia with intralesional fungal hyphae and heterophilic infiltrates. In addition, plaques and nodules also may be found in the trachea, syrinx, liver, intestines, and occasionally the brain.

Morbidity can be underestimated in finishing flocks until processing, when airsacculitis can be the cause of postmortem condemnation in poultry intended for the food supply.

An ocular form is seen in chickens and turkeys as mycotic keratitis, in which large plaques may be expressed from the medial canthus.

Diagnosis of aspergillosis is most frequently based on the clinical presentation and gross lesions. For confirmation, the presence of mold in the affected organs can be demonstrated by culture or by microscopic examination of fixed tissue. There are several ways to obtain a sample of affected tissue: a piece of affected tissue may be excised, the lesion(s) may be sampled using a swab, or one of the plaques can be teased apart. Most commonly, the sample would then be placed on Sabouraud-Dextrose agar or some other medium specific for the growth of mold. Histopathologic examination using a special fungal stain reveals granulomas containing mycelia.

Treatment of affected birds for aspergillosis is generally ineffective. Spontaneous recovery can occur if reexposure to the mold is prevented.

Grossly contaminated or cracked eggs should not be set for incubation because they enable bacterial and fungal growth. Affected eggs may explode and disseminate spores throughout the hatching machine. The use of moldy bedding or ranges should be avoided to prevent outbreaks. Contaminated surfaces may be sprayed or fumigated with enilconazole or other fungicidal disinfectant following the label directions.