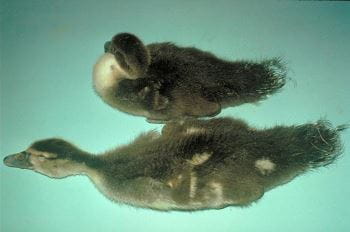 Botulism, duck
Botulism is a toxic disorder resulting from ingestion of the exotoxin produced by Clostridium botulinum. It affects a wide variety of birds and mammals. Clinical signs include leg weakness and paresis that progresses to paralysis. Diagnosis is based on clinical signs and identification of the toxin in serum or GI contents. Immunization with inactivated toxoid has been successful in pheasants but is not cost-effective in commercial chicken flocks.

Botulism is an intoxication that results from ingestion of preformed exotoxin of Clostridium botulinum. The disease occurs worldwide and has been identified in at least 117 species of wild birds representing 22 families. There is concern that endangered avian species may be at risk of extinction because of the disease. Mammalian species affected by the toxin include people, mink, ferrets, cattle, pigs, dogs, horses, laboratory rodents, and various zoo animals. Intoxications are sporadic in poultry, but massive mortality has occurred in waterfowl. Ruminants fed poultry manure contaminated with C botulinum spores have developed botulism.

Botulinum toxins are the most potent naturally occurring protein toxins known, with an estimated amount of 30-100 ng sufficient to cause botulism in humans. They are neurotoxins with an affinity for motor neurons. After absorption, the toxin binds irreversibly to the presynaptic membrane of cholinergic nerve terminals. It enters the cell and blocks release of acetylcholine across the neuromuscular junctions, resulting in flaccid paralysis. Death results from cardiac and respiratory failure. The majority of human cases of botulism are caused by serotypes A and B, followed by E and F. Botulism in animals is mainly caused by toxinotypes C and D. Outbreaks in poultry and waterfowl are predominantly caused by type C toxin. Type A toxin occasionally causes botulism in domestic chickens. Type E toxin has been the cause of botulism in fish-eating birds such as gulls.

C botulinum is ubiquitous, inhabiting soils and freshwater wetland (lakes, marshes) sediments. It is commonly found in the intestine of wild birds, but its presence in the intestine of healthy poultry is questionable. Spore germination and cell multiplication with toxin production require an anaerobic environment that must also provide the necessary substrates and conditions required for multiplication. For toxinotype C, optimal growth occurs between 25°C and 40°C, which may explain why most outbreaks of botulism in waterfowl occur during the summer and fall.

Wetlands are home to numerous invertebrates that can accumulate high levels of botulinum toxin. Carcasses and organic matter provide suitable substrates for multiplication of C botulinum and toxin production. Invertebrates, especially fly larvae (maggots), feed on carcasses that have died from botulism and thus consume botulinum toxin. They are resistant to the toxins and concentrate them in their bodies. Outbreaks in waterfowl and other water birds result from consumption of toxin-laden invertebrates. Birds that die from botulism become infested with maggots, which perpetuates the outbreak in what is known as a "carcass-maggot cycle." Evidence suggests that botulism may also result from direct ingestion of decaying organic matter that contains toxin.

Environmental factors that contribute to the occurrence of outbreaks in wild birds, particularly waterfowl, include low and fluctuating water levels, the presence of vertebrate carcasses and rotting vegetation, and high ambient temperatures. The decomposition of the rotting fish, birds, and other carcasses produce an environment suitable for toxin production.

Outbreaks in commercial poultry are rare and generally tend to recur on the same farm, often affecting the same houses or pens. The disease tends to be most severe in pen-reared pheasants, with mortality as high as 100%. Often, the source of the toxin in these outbreaks is difficult to find, leading to speculation that botulism in poultry is a “toxico-infection.” Toxico-infection, also called “gut toxigenesis,” results from proliferation of C botulinum in the intestine with subsequent production and absorption of the toxin.

It is unclear what factors cause C botulinum to proliferate in the intestine and produce toxin. Studies have shown that healthy broilers do not harbor C botulinum type C in the ceca, and C botulinum was not recovered from the environment of poultry houses that did not have a history of botulism. These findings suggest that C botulinum is neither frequent nor widespread in broiler populations and that outbreaks result from infrequent and sporadic colonization of flocks with C botulinum introduced into a poultry house.

The time between consuming the botulinum toxin and the appearance of the first clinical sign of botulism is dose dependent and varies from a few hours to several days. Clinical signs in poultry and wild birds are similar. Leg weakness and paresis that progress to flaccid paralysis of the legs, wings, neck, and eyelids are characteristic clinical signs. “Limberneck,” the common name for botulism in birds, comes from the neck paralysis typically seen in affected birds. Signs in broiler chickens may also include ruffled or quivering feathers, feathers that are easily pulled out, labored breathing, and sometimes diarrhea with excess urates in loose droppings.

Severely affected birds are in ventral recumbency on the floor with their eyes partially or completely closed and neck outstretched. They are unable to lift or hold their neck up and cannot raise their eyelids because of the flaccid paralysis that develops. Affected birds may have their legs extended behind them, because they are unable to pull them into a normal sitting position.

Weakness is the earliest sign in waterfowl. Birds are initially reluctant to fly when approached and have weak wing-beats and difficulty taking flight. As the disease progresses, they lose their ability to fly and exhibit stumbling gaits and eventually paralysis. Birds in water can drown, because they cannot keep their heads above the water. The incubation period and time to onset of clinical signs is determined by the amount of toxin absorbed.

C botulinum toxins do not cause lesions in affected birds, but maggots or other invertebrates may be found in the crop. Carcasses are usually in good condition and do not show evidence of a chronic or debilitating disease.

Preliminary diagnosis of botulism is based on clinical signs and the absence of gross or microscopic lesions that can explain the neurologic signs. Definitive diagnosis requires detection of the toxin in serum from sick birds. Crop, gizzard, and/or intestinal contents from moribund or very freshly dead birds may also be collected for toxin detection. Samples from birds that have been dead for several hours are unreliable, because C botulinum toxin can result from postmortem multiplication of the organism and toxin production. It is preferred to collect serum from birds with clinical signs of varying severity.

A bioassay test in mice (mouse-lethality assay) used to be the standard method to detect C botulinum toxins, but molecular tests based on ELISA can be used. A PCR test can be used on a variety of samples to detect the genes responsible for toxin production and differentiate the different toxinotypes, but it does not detect biologically active neurotoxin and should not be used alone. Because botulinum toxins are heat labile and can be destroyed at 80°C for ≥10 minutes, sera must be refrigerated or frozen as soon as possible after collection and shipped with ice packs to the testing laboratory.

Leg weakness or paralysis may be the only sign in mild intoxications, which must be differentiated from Marek disease Marek's Disease in Poultry Marek disease is a highly contagious viral disease of poultry characterized by T-cell lymphomas and peripheral nerve enlargement. Standard criteria used for diagnosis include history, clinical... read more

, drug and chemical toxicosis (especially ionophore toxicity), or appendicular skeletal problems. In waterfowl, botulism must be differentiated from chemical toxicosis, especially lead poisoning Lead Also see Toxicology Introduction et seq. When toxicosis in a poultry flock is suspected based on mortality, on decreased production/growth, or on other clinical signs such as paralysis, the... read more

Birds with botulism may recover without treatment. Antibiotics effective against clostridia may be useful if the disease is toxico-infectious. Collection and disposal of dead birds is critical to prevent and limit outbreaks, especially in pheasant and broiler chicken flocks. Fly control may reduce the risk of toxic maggots in the environment. Some, but not all, recurrent outbreaks in broiler flocks may be prevented by cleaning and disinfecting with products effective against spore-forming bacteria. Disinfection around poultry houses is suggested, because spores can be found outside of the houses and be reintroduced. In waterfowl outbreaks, ducks should be dispersed from affected areas and water levels stabilized. Elimination of large, shallow areas may prevent conditions favorable for decay of vegetation and die-off of invertebrates.

Active immunization with inactivated type C bacterin-toxoids has been successful in pheasant operations but is not cost-effective or feasible in commercial chickens and wild ducks. Treatment with type-specific antitoxin is effective but not practical.

The zoonotic potential of type C botulism is minimal. Botulism in people is caused mostly by toxin types A, B, and E. Furthermore, pathogenicity of toxin type C for people is questionable. However, botulism caused by type C toxin has been confirmed in several nonhuman primates.

Overview of Viral Encephalitides in Poultry
Others also read

Overview of Viral Encephalitides in Poultry