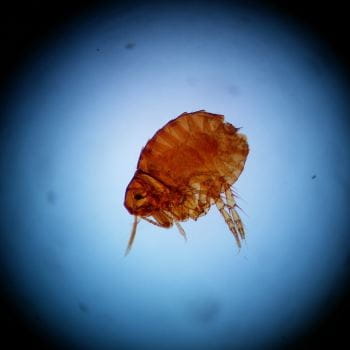 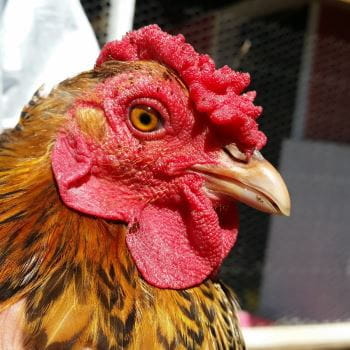 The sticktight flea, Echidnophaga gallinacea, is an occasional poultry pest in temperate areas and a major poultry pest in the subtropical and tropical New World. These fleas may be common in backyard poultry flocks or areas where birds spend a lot of time outdoors or interface with wildlife. Adult fleas are dark brown and laterally flattened. Adult fleas embed in the skin of their host for days or weeks. On chickens, they prefer to attach to the wattles, comb, or face. Without detaching from the host, females lay their eggs, which fall into the litter or soil. Larvae hatch and live on host blood excreted by adult fleas and organic material in the litter or soil. The larvae develop best in sandy, well-drained litter. Larvae pupate and later emerge as adults, which then search for a host. This whole cycle takes about 1–2 months.

Hosts of the adult flea include chickens, turkeys, pigeons, pheasants, quail, people, and many other mammals. Fleas cause irritation, restlessness, and blood loss that results in anemia Anemia in Animals Anemia is an absolute decrease in RBC numbers, hemoglobin concentration, or PCV. Signs include pale mucous membranes, increased heart rate, and hypotension. Diagnosis can be made by CBC, but... read more

and death, particularly in young birds.

The Western chicken flea, or black hen flea, Ceratophyllus niger, seems to be confined to the Pacific coast area of the USA and Canada. This flea breeds in droppings and feeds on birds only occasionally. The European chicken flea, C gallinae, is found worldwide. It breeds in nests and litter and is on the birds only to feed. In addition to chickens, it attacks many other birds, as well as people and domestic pets. Heavy flea infestations cause host emaciation and reduced egg production.

The most important flea control measures are to remove infested litter and to dust the litter surface with carbaryl, coumaphos, malathion, or pyrethroids to kill immature fleas. Insect growth regulators such as methoprene are also effective. Sticktight fleas can be controlled by topical application of insecticides.

Fleas in Dogs and Cats

Other Bloodborne Organisms in Poultry