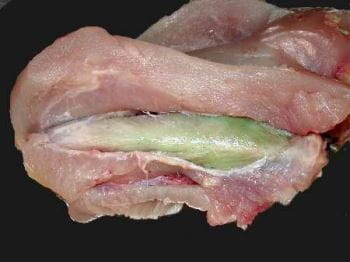 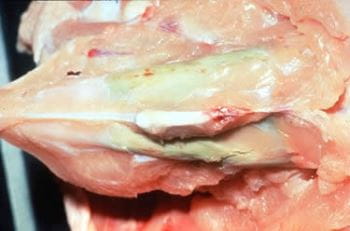 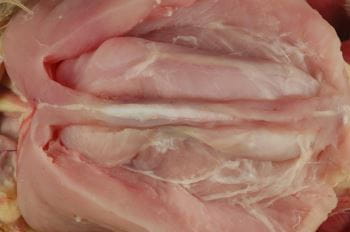 Exertional myopathy results from overly strenuous muscular exercise and can be precipitated by preexisting conditions such as selenium deficiency. Inadequate energy metabolism and/or mechanical stresses occurring during contraction are thought to be the cause of myofiber degeneration.

The lesions can be monophasic (resulting from a single event, eg, transport, capture, or restraint myopathy) or polyphasic (with repeated or ongoing events). Early gross lesions include muscle pallor with edema or bloodstained transudate. There is swelling, degeneration, necrosis, and mineralization of muscle fibers, with edema, hemorrhage, and infiltration of heterophils and macrophages.

The function of the deep pectoral muscle is to elevate the wing. The pectoral musculature is well-developed in modern meat birds, but the muscles are seldom used. After episodes of prolonged wing flapping (eg, handling, when a lame bird uses its wings to assist ambulation, or when a bird is placed on its back), deep pectoral muscle injury and swelling occurs. Because of the tight surrounding fascia, the swollen muscle cannot expand, which results in collapse of the blood vessels supplying the muscle. The decreased (or lack of) blood perfusion leads to ischemia, tissue hypoxia, and muscle necrosis (compartment syndrome). The lesion can be produced artificially by stimulating the deep pectoral muscle to contract and can be prevented by surgically opening the fascial sheath covering the muscle before exercise.

The myopathy may be unilateral or bilateral, with the central ⅓–⅔ of the muscle most prominently affected. Early after the muscle injury occurs, the involved muscle is pale, swollen, and edematous. Later, it acquires a green coloration and becomes drier and sharply demarcated from adjacent, viable muscle. Eventually, the necrotic muscle becomes enclosed in a thick, fibrous capsule. The defect can be identified by a flattening or depression of the breast over affected muscles, by palpation, or by transillumination of carcasses at slaughter.

Flock prevalence is usually low, but prevalence as high as 25% has been reported, with few birds developing the disease before 24 weeks of age. Deep pectoral myopathy occurs frequently in turkey breeder hens during artificial insemination. The disease is usually subclinical, and major loss is from downgrading or condemnation at processing. Deep pectoral myopathy is not easy to detect at processing when birds are marketed as whole carcasses.

Incidence can be decreased by careful handling of susceptible birds to prevent excessive wing flapping and, as a longterm method, by selective breeding, because the condition has a genetic component. Supplementing rations with selenium, vitamin E, or methionine has not influenced incidence.

Capture myopathy (exertional rhabdomyolysis) is mainly seen in zoo and wild birds and is rare in poultry. Long-legged wading birds are particularly susceptible. Capture myopathy results from exertion, struggle, or stress occurring during capture, handling, immobilization, or transport. Hyperthermia and metabolic acidosis due to anaerobic glycolysis are important factors. Pale skeletal muscle, especially muscle from the legs, or sometimes cardiac muscle is seen grossly. However, no gross lesions are present in peracute cases. Ischemic and myoglobinuric nephrosis may be present in birds that survive for a few days.

Prognosis of symptomatic birds is usually poor, but treatment of single, valuable birds can be attempted and may be successful. Such treatment may consist of a combination of corticosteroids, vitamin E, selenium, parenteral fluids, and forced feeding in conjunction with physiotherapy. Prevention is best. Well-planned and executed capture and restraint that minimizes pursuit time, struggling, noise, and visual stimulation is key. Sedation or anesthesia can be useful.

The pathogenesis is unknown but presumed to be similar to that of exertional myopathy. Often, only one leg is affected. No evidence of external trauma is seen. Skin over edematous subcutaneous tissue is pale, feather follicles are less visible, and the skin slips easily over underlying muscle when moved. Occasionally, there is crepitation. Affected areas are dark when the edematous areas contain blood. Typically, when lesions are cut, the edematous subcutis is a few to several millimeters thick and is amber, occasionally green, or rarely red. Purulent exudate is absent, which distinguishes transport myopathy from cellulitis. If hemorrhage is present, the adductor muscles usually are torn. Removal of affected legs at processing results in carcass downgrading.

Microscopically, acute multifocal muscle necrosis is found, primarily in the adductor muscles. Subacute or chronic lesions are sometimes seen and suggest earlier episodes of myopathy. Serum CK increases sharply between farm and processing. Programs designed to improve leg strength and conformation, as well as improved handling and transportation conditions, have greatly reduced the frequency of this disease.

Overview of Myopathies in Horses