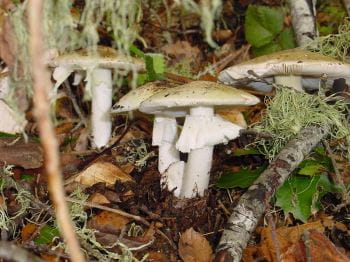 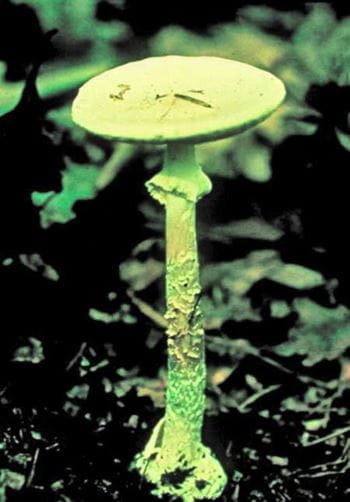 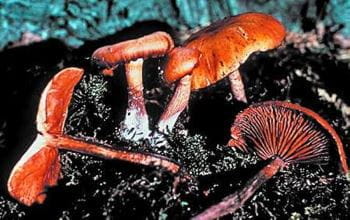 These mushroom species account for most reported mushroom-induced deaths. They are common throughout North America and are associated with oak, pine, and birch trees.

Amanita phalloides, also known as death cap, is found throughout North America with two distinct ranges: one on the west coast from California to British Columbia, and one on the east coast from Maryland to Maine. The large fruiting bodies appear in the late summer and fall and have a smooth, yellowish-green to yellowish-brown cap, white gills, a white ring around the upper part of the stem (veil), white spores, and a white cup-like structure around the base of the stem (volva).

Amanita ocreata is known as the western North American destroying angel and grows exclusively along the Pacific Coast from Baja California to Washington. The fruiting bodies are found in later winter and spring and have a white or cream-colored cap; white, short gills; a white stem with a white, thin, broken, partial veil; white spores; and a white, thin volva. Amanita bisporigera is native to eastern and midwestern North America and, although genetically very diverse, should be considered highly toxic. The fruiting bodies are found in summer and early fall and have a white cap, white gills, a white ring around the upper part of the stem, white spores, and a white volva.

Lepiota spp have whitish to brown caps; free gills; a white, thin, broken, partial veil; white spores; and no volva. They are saprobic on decaying plant matter and typically found in the Pacific Northwest.

Galerina marginata are most frequent in spring and fall throughout North America. They have small, yellow-brown to brown caps, have rusty brown spores, and grow on rotting wood of fallen hardwoods and conifers.

Conocybe filaris (also known as Pholiotina filaris) has brownish, tacky caps with yellowish gills becoming rust and a ring on their brownish stalks. They have no volva, and their spores are brown to rust-brown. These species are abundant from late fall to midwinter in grassy areas and on woody debris of decayed coniferous and deciduous logs throughout North America.

These mushroom species can contain a number of highly toxic cyclopeptides: amatoxins, phallotoxins, and virotoxins. Whereas the amatoxins are reported to be well absorbed orally, phallotoxins and virotoxins are not toxins. Therefore, only amatoxins, which include the hepatotoxic amanitins, are responsible for severe and fatal poisonings.

Amatoxins (alpha, beta, and gamma amanitin derivatives) are the most potent; they are not found in all Amanita spp. In humans, the estimated oral LD50 of alpha-amanitin is 0.1 mg/kg, which is similar to an oral LD50 for methyl-gamma-amanitin in dogs of 0.5 mg/kg. On average, species of A phalloides and A ocreata contain 1.5–2.3 mg amanitins per gram of mushroom dry weight. Therefore, one mushroom cap can contain a lethal dose for an animal or a human. The rate of absorption of amanitins from the gastrointestinal tract varies with the animal species and is estimated to be much greater in dogs than in mice and rabbits; rats appear relatively resistant to the toxic effects of amanitins.

After rapid absorption, amanitins are distributed to the extravascular space. In the liver, alpha-amanitin is taken up by hepatocytes via OATP1B3, an organic anion-transporting polypeptide. Amanitins do not undergo metabolism and are primarily excreted unchanged in urine with a small amount (up to 7%) eliminated in bile. Amanitins inhibit RNA polymerase II, which shuts down transcription and leads to decreased protein synthesis. Cells with a high metabolic rate, including hepatocytes, crypt cells, and proximal convoluted tubules of the kidneys, are most prone to the toxic effects. Apoptosis of hepatocytes and amanitin-induced insulin release are additional effects that contribute to the pathogenesis.

Thus, amanitins are primarily liver toxins, but they also affect many organ systems.

The clinical course of amanitin poisoning is divided into 4 phases (albeit these 4 consecutive stages are not seen in all cases):

The reported long latent phase is of diagnostic importance. During the gastrointestinal phase, poisoned animals develop vomiting, abdominal discomfort, diarrhea, and lethargy. After the gastrointestinal phase, severe hypoglycemia as a result of breakdown of liver glycogen can occur. In one study, 50% of dogs administered lethal doses of amanitins or pieces of A phalloides died from hypoglycemia 1–2 days after exposure.1 References These mushroom species account for most reported mushroom-induced deaths. They are common throughout North America and are associated with oak, pine, and birch trees. Photograph of Amanita... read more

Diagnosis of Cyclopeptide Ingestion in Animals

Mushroom identification characteristics, coupled with consistent clinical signs Clinical Findings These mushroom species account for most reported mushroom-induced deaths. They are common throughout North America and are associated with oak, pine, and birch trees. Photograph of Amanita... read more

, are important in the diagnostic approach. Confirmatory diagnosis is made by detection of alpha-amanitin in serum, urine, gastric contents, suspect mushroom, liver, or kidney. This testing is provided by select veterinary toxicology laboratories. In dogs, alpha-amanitin is detected in plasma within 1 hour after exposure. In urine, alpha-amanitin concentrations are highest on day 1 but can be detected up to 4 days after exposure. Amanitin has been detected in livers and kidneys of dogs dying from amanitin poisoning. In humans, amanitin concentrations have been detected in liver and kidney up to 22 days after ingestion and at later time points. Kidneys appear to contain higher concentrations than liver. The well-known Meixner test (also known as the newspaper test of Wieland) should not be relied on alone for amanitin identification. During the gastrointestinal phase, animals should be monitored for liver and kidney function. At postmortem examination, the liver is often swollen, without any other major gross abnormalities. Histologically, there is massive hepatocellular necrosis with collapse of hepatic cords and acute tubular necrosis in dogs with renal failure.

Treatment of Cyclopeptide Ingestion in Animals

The treatment plan consists of close monitoring, fluid replacement, and supportive care. Activated charcoal at 1 to 2 g/kg, PO, with or without a cathartic like sorbitol (do not use more than once, and only if there is no diarrhea), followed by 2 or 3 half-doses within 24 hours of exposure, is recommended. Although multidose activated charcoal treatment was recommended in the past, interruption of the enterohepatic circulation of amanitin is unlikely to be effective after 24 hours. Dextrose, vitamin K1, blood products, and IV fluid therapy are important in case management. Vomiting is managed with metoclopramide (0.2–0.4 mg/kg, SC or IM, every 6 hours as needed) or maropitant (1 mg/kg, SC, every 24 hours as needed). In Europe, a silibinin-containing product is a well-established and approved treatment for amanitin poisonings in humans; however, it is not approved in the US. Silibinin, or silybin, the main component of silymarin, which is extracted from the common milk thistle, Silybum marianum, decreases the uptake of amanitins into hepatocytes. In dogs, silibinin (50 mg/kg, IV) administered at 5 and 24 hours after exposure to A phalloides, was shown to be effective. In mice, resveratrol (30 mg/kg, IP) at 12 and 24 hours after exposure to a lethal dose of amanitin, prevented and healed hepatotoxicity. Other options include use of nonspecific hepatoprotective agents like N-acetylcysteine or S-adenosylmethionine (SAMe), although their efficacy remains undetermined. Penicillin G (1000 mg/kg, IV), administered at 5 hours after dogs were exposed to A phalloides, was also effective in decreasing amanitin uptake into the hepatocytes. However, the efficacy of penicillin G in humans with amanitin poisoning is questionable. Extracorporeal decontamination has been used in humans, but efficacy data varies, and no data exist in the veterinary literature. Biliary drainage has been proposed, but therapeutic efficacy must be evaluated.

These mushrooms have a non-gilled, yellow-brown to dark-red, deeply wrinkled, honeycomb (unlike true morels that are hallowed and not chambered), saddle-shaped cap on a short stalk. They are found on the ground under conifers and aspens throughout North America, especially in spring. The toxin involved is the hydrazone gyromitrin, which on ingestion is hydrolyzed to monomethylhydrazine. Monomethylhydrazine depletes pyridoxal 5-phosphate, resulting in decreased gamma-aminobutyric acid (GABA) concentrations and increased glutamic acid concentrations. Other metabolites of gyromitrin can also result in hemolysis and liver and kidney failure. The concentration of gyromitrin varies with environmental conditions.

Vomiting, watery diarrhea, abdominal discomfort, convulsions, and coma may be noted 6–12 hours after ingestion of a toxic dose. Methemoglobinemia and hemolytic anemia, hepatitis, jaundice, nephritis, and death can develop some time later. Death appears to be due to hepatorenal failure.

Activated charcoal (1–2 g/kg) may be helpful if administered early after ingestion. Intravenous fluid therapy should be administered as needed. Pyridoxine (75–150 mg/kg, IV) controls neurologic signs. Pyridoxine-induced peripheral neuropathy from administering high doses should be avoided. Diazepam (0.5 to 1.0 mg/kg, IV, to effect) can also be considered for seizure control. For the induced hepatic encephalopathy, supportive treatment is essential. In addition to monitoring methemoglobin concentration, hepatic and renal function should also be monitored.

Overview of Mushrooms Toxic to Animals