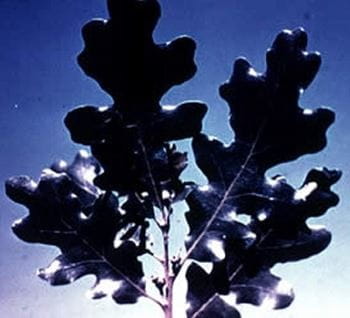 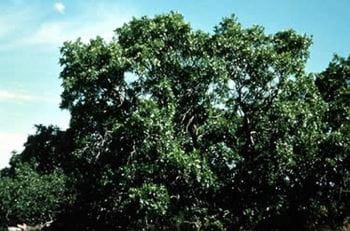 Most animals are susceptible to Quercus poisoning, although cattle and sheep are most commonly affected. Most species of oak (Quercus spp) in Europe and North America are considered toxic. Clinical signs occur 3–7 days after consumption of large quantities of young oak leaves in the spring or ingestion of bark or green acorns in the fall. Fallen trees associated with a recent storm are often reported with outbreaks. Feed restriction before exposure plays a crucial role, enhancing susceptibility. Mortality as high as 70% may be seen. Malformed calves and abortions have been reported in cows that consume acorns during the second trimester of pregnancy. The toxic principle, which appears to be pyrogallol, gallotannins, polyhydroxyphenolic compounds, or their metabolites produced by microbial hydrolysis in the rumen; binds and precipitates proteins by astringent action, which results in GI, hepatic, and renal dysfunction.

Diagnosis of quercus poisoning is based on clinical findings, necropsy, history, and histopathologic examination of the kidneys (ie, nephrosis). Other common diseases that resemble oak poisoning include pigweed (Amaranthus spp) poisoning, aminoglycoside antibiotic poisoning, oxalate poisoning, urolithiasis Urolithiasis in Ruminants Obstructive urolithiasis is a significant cause of morbidity and mortality in male ruminants. Uroliths form from protein and mineral components of the diet. They develop in the urinary bladder... read more

Consumption of a pelleted ration supplement (1 kg/head per day) containing 10%–15% calcium hydroxide plus access to more palatable feeds may be used as a preventive measure if exposure to acorns or oak leaves cannot be avoided. Removal of fallen acorns from the grazing area may also be helpful. Calcium hydroxide, activated charcoal, ruminatorics, and purgatives (such as mineral oil [1 L/500 kg], sodium sulfate [1 kg/400 kg], or magnesium sulfate [450 g/400 kg]) may be effective antidotes if administered early in the course of disease. Polyethylene glycol (1 g/kg per day) administered in the feed or water will bind tannins and reduce tissue damage. Fluid therapy to correct dehydration and acidosis and transplantation of ruminal microflora may be beneficial. Clinical recovery usually occurs within 60 days but is rare if renal dysfunction is severe. Improved range management to limit grazing in immature oak stands can prevent development of quercus toxicosis.

Overview of Rodenticide Poisoning in Animals

Overview of Arsenic Poisoning in Animals