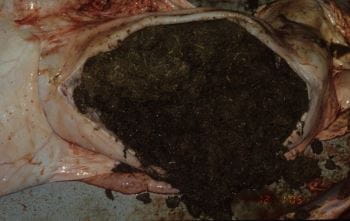 Abomasal impaction, cow
Abomasal impaction is an infrequently diagnosed disease of cattle characterized by drier-than-normal abomasal contents and a larger-than-normal abomasal volume. The initial clinical signs are typically complete anorexia, scant feces, moderate distention of the abdomen, weight loss, and weakness. Diagnosis is based on history, clinical signs, and laboratory test results. Medical treatment with laxatives and prokinetic drugs may be effective.

Impaction of the abomasum develops in pregnant beef cows during cold winter months when cattle have decreased water intake and are fed poor-quality roughage. Impaction also has been seen in feedlot cattle fed a variety of mixed rations containing chopped or ground roughage (straw, hay) and cereal grains and in late-pregnancy dairy cows on similar feeds. Impaction of the pyloric antrum is an underdiagnosed condition in dairy cows in early lactation.

Etiology and Pathogenesis of Dietary Abomasal Impaction in Cattle

The etiology of abomasal impaction can be divided into dietary (primary impaction) and nondietary (secondary impaction) causes, which can occur in various combinations.

The cause of dietary abomasal impaction is considered to be consumption of excess roughage low in both digestible protein and energy, in combination with decreased water availability during winter. Impaction with sand can occur if cattle are fed hay or silage on sandy soils or fed sandy or dirty root crops. Outbreaks may affect up to 15% of all cattle on individual farms when the ambient temperature drops to –14°F (–26°C) or lower for several days.

The cause of nondietary abomasal impaction in postparturient dairy cows is likely related to abomasal hypomotility and decreased abomasal emptying. Abomasal impactions have also been reported in cows in late gestation, caused by a mechanical interaction between the pregnant uterus and the abomasum, which is displaced by the uterus in a more cranial position. Another cause may be the decreased abomasal motility and emptying caused by vagal indigestion Vagal Indigestion Syndrome in Ruminants Vagal indigestion syndrome is characterized by the gradual development of abdominal distention secondary to rumenoreticular distention. The distention was originally thought to be the result... read more (Hoflund syndrome). Finally, a hereditary abomasal emptying defect resulting in abomasal impaction has been described in large sheep breeds (eg, Suffolk).

Once the abomasum becomes impacted, subacute obstruction of the upper GI tract develops. Hydrogen and chloride ions are continually secreted into the abomasum despite the impaction, resulting in atony and alkalosis with hypochloremia. Varying degrees of dehydration develop, because fluids are not moving beyond the abomasum into the duodenum for absorption. Sequestration of potassium ions in the abomasum results in hypokalemia Hypokalemia in Adult Cattle Marked hypokalemia (serum or plasma potassium concentration 2.5 mmol/L) is common in inappetant, lactating dairy cows and ketotic dairy cows receiving multiple treatments of isoflupredone acetate... read more . Impaction of the abomasum may be severe enough to cause irreversible abomasal atony.

Clinical Findings and Lesions of Dietary Abomasal Impaction in Cattle

Complete anorexia, scant feces, moderate distention of the abdomen, weight loss, and weakness are usually the initial clinical signs of dietary abomasal impaction. Body temperature is usually normal but may be subnormal during cold weather. A mucoid nasal discharge tends to collect at the external nares and on the muzzle; the muzzle is usually dry and cracked, caused by both the failure of the animal to lick its nostrils and the effects of dehydration. The heart rate may be increased, and mild dehydration is common.

Most often, the rumen is static and distended with dry contents, but it may contain excess fluid if the cow has been fed finely ground feed. The pH of the ruminal fluid is usually normal (6.5–7). Protozoal activity in the rumen ranges from normal to a marked reduction in numbers and activity (assessed microscopically under low power). The impacted abomasum is usually located in the right lower quadrant on the floor of the abdomen. Deep palpation and strong percussion of the right flank may indicate the presence of a large, firm mass (impacted abomasum) and elicit a grunt (as is common in acute traumatic reticuloperitonitis Traumatic Reticuloperitonitis Traumatic reticuloperitonitis develops as a consequence of perforation of the reticulum. It is important as a differential diagnosis of other diseases marked by stasis of the GI tract, because... read more ), probably because of distention of the abomasum and stretching of its serosa.

Severely affected cattle die 3–6 days after the onset of clinical signs. The abomasum ruptures in some cases, and death from acute, diffuse peritonitis and shock occurs precipitously in a few hours. In sand impaction, there is considerable weight loss, chronic diarrhea with sand in the feces, weakness, recumbency, and death in a few weeks.

Metabolic alkalosis, hypochloremia, hypokalemia Hypokalemia in Adult Cattle Marked hypokalemia (serum or plasma potassium concentration 2.5 mmol/L) is common in inappetant, lactating dairy cows and ketotic dairy cows receiving multiple treatments of isoflupredone acetate... read more , and hemoconcentration are common, as are total and differential WBC counts within the normal range. At necropsy examination, the abomasum is commonly enlarged many times its normal size and impacted with dry, rumen-like contents. The omasum may be similarly enlarged and impacted. The rumen is grossly enlarged and filled with dry contents or fluid. The GI tract beyond the pylorus is characteristically empty and has a dry appearance. Varying extents of dehydration and emaciation are also present. If the abomasum has ruptured, lesions of acute, diffuse peritonitis are present. In dairy cattle in early lactation, typically only the pyloric antrum is impacted.

Clinical diagnosis of dietary abomasal impaction is based on the nutritional history, clinical evidence of impaction, and laboratory results. The disease must be differentiated from secondary abomasal impaction as a form of vagal indigestion. Ultrasonographic examination is a valuable tool to assess size and position of the abomasum and to diagnose peritoneal lesions.

Impaction of the abomasum as a complication of traumatic reticuloperitonitis usually occurs in late pregnancy, and commonly only in one animal. A mild fever may or may not be present, and there may be a grunt on deep palpation of the xiphoid. The rumen is enlarged and may be hypermotile (early) or atonic (late). In many cases, it is impossible to distinguish between the two causes of impacted abomasum, and examination via right flank laparotomy may be necessary to explore the abdomen for peritoneal lesions.

The challenge is to recognize the cases of dietary abomasal impaction that will respond to treatment and those that will not, ie, to determine those animals that should be slaughtered immediately for salvage. Cows that are weak, have a severely impacted abomasum, and have a marked tachycardia (100–120 bpm) are poor candidates for treatment, with a high risk of failure. Medical treatment usually requires a confirmed diagnosis via examination by right-side laparotomy. In treated cows, the metabolic alkalosis, hypochloremia, hypokalemia, and dehydration should be corrected. Lubricants can be used to try to move the impacted material; it is necessary to empty the abomasum surgically only in cattle with severe impaction. Balanced electrolyte solutions are administered IV continuously for up to 72 hours at a daily rate of 80–120 mL/kg. Some cows respond well to this therapy and begin ruminating and passing feces in 48 hours.

Mineral oil should be administered at 4 L/day for 3 days. Additionally, the laxative dioctyl sodium sulfosuccinate (DSS) can be injected once into the abomasum during standing right flank laparotomy at 60–100 mL of a 25% solution for a 1,000-lb (450-kg) patient. DSS should not be administered PO because it kills rumen protozoa. A beneficial response cannot be expected in <24 hours; in cattle that respond, improvement is usually seen by the end of day 3 after treatment begins. Erythromycin (10 mg/kg, IM, once to twice daily) can be administered as a prokinetic in cattle that do not improve after surgery, provided that mineral oil has been administered and physical obstructions were not identified during surgery.

Surgery may be considered, but results are often unsuccessful, likely because of abomasal atony, which appears to worsen after surgery. An alternative may be to perform a rumenotomy to empty the rumen and infuse mineral oil directly into the abomasum through the reticulo-omasal orifice in an attempt to soften and promote evacuation of the abomasal contents. Cattle with secondary impactions that develop as a sequela of traumatic reticuloperitonitis or abomasal volvulus usually show signs of vagal indigestion, and abomasal impaction may be diagnosed during exploratory surgery.

The induction of parturition by administering dexamethasone (20 mg, IM) may be indicated in affected cattle within 2 weeks of term and in which the response to treatment for a few days has been unsuccessful. Parturition may assist recovery because of a reduction in intra-abdominal volume. For sand impaction, affected cattle should be moved off the sandy soil and fed good hay and a grass mixture containing molasses and minerals. Severely affected cattle should be treated with administration of mineral oil (4 L/day for 3 days).

Prevention and Control of Dietary Abomasal Impaction in Cattle

Prevention of dietary abomasal impaction is possible by providing the necessary nutrient requirements for wintering beef cattle. When low-quality roughage is used, it should be analyzed for crude protein and digestible energy. Based on the analysis, grain is usually added to the ration to meet energy and protein requirements.

The nutrient requirements of beef cattle Nutrition: Beef Cattle are guidelines for use during average conditions; higher nutrient levels than those indicated may be necessary, particularly during periods of severe cold stress. Adequate fresh drinking water should be supplied at all times; the practice of forcing wintering cattle to obtain their water requirements by eating snow while on low-quality roughage is not acceptable.