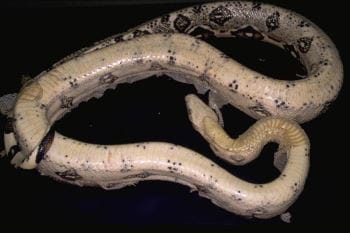 Few viruses have been clearly proved as etiologic agents of disease in reptiles, but many viruses have been isolated from sick reptiles. Several viruses have been linked strongly enough for them to be considered the causative agent until proved otherwise. A number of viral PCR and serology tests are available.

Boas and pythons are most commonly affected by inclusion body disease (IBD), which was originally thought to be caused by a retrovirus but recently confirmed as a reptarenavirus. Boas are considered a more typical host because so many are infected, and they can harbor the virus for months to years with few to no clinical signs. Early signs, possibly precipitated by any factor causing immunosuppression, include a history of unthriftiness, anorexia, weight loss, secondary bacterial infections, poor wound healing, dysecdysis, and regurgitation. In essence, IBD should be considered in every sick boa. Typical findings in the acute phase of the disease include leukocytosis and a normal chemistry panel. As the disease progresses, WBC counts tend to decline to subnormal levels. Blood chemistry results vary depending on how debilitated and dehydrated the boa becomes, but organ damage may occur. As the disease becomes chronic, some boas exhibit neurologic symptoms ranging from mild facial tics and abnormal tongue flicking to failure of the snake to right itself when placed in dorsal recumbency and severe seizures.

Pythons are thought to be a more acutely affected host for the reptarenavirus, because the course of disease is more acute and neurologic symptoms more often profound, with most pythons presenting with severe neurologic disease. Although the active disease can linger for months or more in boas, most pythons die within days or weeks of the onset of clinical signs.

Exposure to reptarenaviruses appears to be due to a transfer of body fluids. Breeding, fight wounds, fecal/oral contamination, and snake mites have been implicated as common ways of transfer. A tentative diagnosis is based on history and clinical signs. Blood work varies depending on the stage of the disease, but few diseases in snakes will cause such increased WBC counts in the early stages. On blood smears, inclusion bodies are frequently found in the cytoplasm of leukocytes. A definitive diagnosis is obtained by PCR and biopsy of internal tissues in which the characteristic eosinophilic inclusion bodies are found, eg, the liver, kidney, esophageal tonsils, and stomach.

IBD is not curable, and many owners choose euthanasia. However, individuals may elect to isolate their snakes and treat with supportive and palliative measures. It is essential to educate owners not to sell infected specimens or their offspring, because this has caused the disease to spread worldwide.

Retroviruses have also been found in Russell vipers, corn snakes, and California kingsnakes in association with malignant tumors. A retrovirus isolated from a sarcoma in a Russell viper was designated as viper virus. A related virus was isolated in a corn snake from a rhabdomyosarcoma and designated cornsnake retrovirus.

Adenoviruses have been implicated in fatal hepatic or GI diseases in:

In bearded dragons, the route of transmission appears to be fecal/oral contamination. Clinical signs are more commonly noted in juvenile dragons but can affect adults, usually to a lesser extent. Signs are vague and include lethargy, weakness, weight loss, diarrhea, and sudden death. The morbidity is high in young bearded dragons, but survival is increased with supportive care. Fluid administration, force feeding, and antibiotics for secondary infections may be useful.

The signs of disease in bearded dragons are vague and similar to those caused by coccidia and nutritional disorders, so diagnostic confirmation is important. Characteristic intranuclear inclusion bodies are found in several internal organs, primarily the liver. When working with a large breeding group of lizards, it is practical to sacrifice a failing specimen to make a diagnosis. Premortem diagnosis can be accomplished by liver biopsy. Identification of adenovirus by PCR from fresh feces may indicate shedding and infection but not necessarily disease.

Recovered lizards should be quarantined for at least 3 months. Duration of viral shedding after recovery is unknown, so owners should be discouraged from selling or trading previously infected animals.

Herpesviruses have been isolated from freshwater turtles, tortoises, and green sea turtles. In freshwater turtles, the virus may be associated with hepatic necrosis. In tortoises, the virus may cause necrosis of oral mucosa accompanied by anorexia, regurgitation, and oral and ocular discharge. Treatment in tortoises includes isolation, supportive care, application of 5% acyclovir to oral lesions, and systemic acyclovir. Herpesviral disease is diagnosed by PCR, cytologic/histologic intranuclear inclusion bodies, and histologic demonstration of a host pathologic reaction.

Herpesvirus infection of farmed green sea turtles have been associated with gray patch disease and lung-eye-trachea disease, whereas fibropapillomas plague certain free-ranging populations. Biopsies of the skin reveal basophilic intranuclear inclusion bodies in epidermal cells; viral particles are noted in the cytoplasm by electron microscopy. PCR testing is frequently the most common approach to identify the presence of a herpesvirus. There is no specific treatment, but reduction of crowding and stress appears to decrease the incidence.

Fibropapillomatosis, caused by chelonid alphaherpesvirus 5, has been reported from free-ranging sea turtles, especially around Hawaii. The route of transmission is not known, but leeches have been implicated as mechanical vectors. The light gray to black masses range in size up to 20 cm in diameter. The location of the masses seems to dictate the severity of signs. Masses occurring on periocular tissue can obscure vision. Growths on the flippers can interfere with swimming and the ability to forage for food. Internal masses also are seen, primarily in the lungs, liver, kidneys, and GI tract. Diagnosis is made by characteristic lesions and histology. Treatment consists of surgical removal, with wide margins to help reduce recurrence. Some turtles recover spontaneously, whereas those with internal or ocular lesions usually perish.

Ferlavirus (Paramyxoviridae) infections have been reported in various viperid snakes but have also been reported in nonvenomous snakes and lizards. This highly contagious virus causes predominantly respiratory signs; transmission appears to be from respiratory secretions. Secondary bacterial infections are common because of the severe inflammation initiated by the virus, and it is not unusual to note nasal discharge, open-mouth breathing, caseated pus in the oral cavity, and labored breathing. Neurologic involvement, including tremors and opisthotonos, is occasionally noted.

Endoscopic biopsies and postmortem samples of lung can be submitted to detect viral particles by histology and electron microscopy. A hemagglutination inhibition test is available to measure antibodies against ophidian paramyxovirus in zoos and private collections; a positive titer should be used as a screening tool to help eliminate infected animals and prevent carriers from entering noninfected collections. PCR detection is also available.

There is no specific treatment, but supportive care and antibiotics may prove useful. Affected specimens should be isolated and strict hygiene practices followed. Although a vaccine is under development, it is currently not effective.

Recently, a nidovirus (Coronoaviridae) has been reported as a cause of pneumonia and stomatitis in pythons and boas. Detection of the virus is possible by PCR of oral swabs and tracheal washes.

West Nile virus has resulted in epizootic outbreaks in farmed alligators, with the virus causing multiorgan necrosis, heterophilic granulomas, heterophilic perivasculitis, and lymphoplasmacytic mengingoencephalitis. Very high viremia titers have been reported in various reptiles, suggesting that reptiles may play a role as an amplification host.

Viral particles appear to be transmitted from one European green lizard to another via bite wounds. The resulting papillomas are 2–20 mm in diameter and may be single or multiple. Although there are no signs in the initial phase, affected lizards may become lethargic and anorectic and die. Diagnosis involves detection of viral particles by electron microscopy. Treatment consists of surgical removal of single masses, although regrowth is common. Isolation of affected lizards is perhaps the only way to prevent spread.

A papilloma-type virus also appears to affect Bolivian side-neck turtles and appears as white, oval skin lesions distributed over the head. Ulcerative shell lesions are also seen, primarily on the plastron. Diagnosis is made by identifying viral particles on electron microscopy. Treatment is supportive and palliative, and affected animals should be isolated.

Iridoviruses have been reported in various chelonians, snakes, and lizards. An iridovirus was found in a Hermann’s tortoise, which died without prior signs of disease. Progressive anemia in Australian geckos has been linked to an iridovirus. Clinical signs range from none to stomatitis, rhinitis, conjunctivitis, tracheitis, edema, and cutaneous abscessation. In some cases, the recovered iridoviruses have been closely related to amphibian ranaviruses. Although the clinical importance of several of these viruses remain unclear, iridoviruses deserve close attention, especially in chelonians.

Many other viruses continue to be isolated from reptiles, but little information exists regarding disease, diagnosis, control, and treatment. Unexplained deaths should be investigated by necropsy, with a complete set of tissues frozen and retained should viral investigations be indicated.