Congenital and Inherited Anomalies of the Musculoskeletal System in Multiple Species 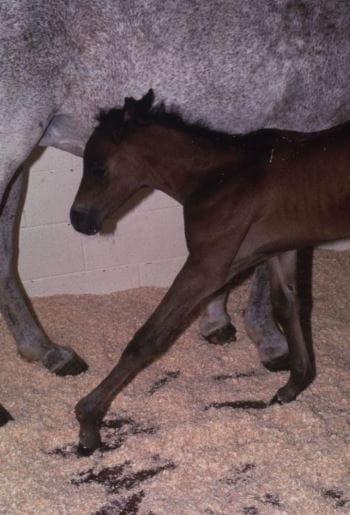 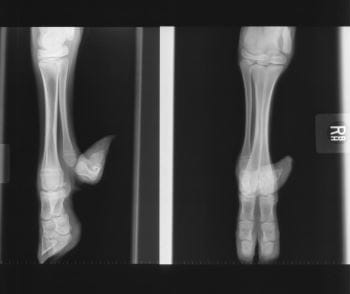 Contracted flexor tendons are probably the most prevalent abnormality of the musculoskeletal system of newborn foals and calves. An autosomal recessive gene causes this condition. In utero positioning may also affect the degree of disability.

At birth, the pastern and fetlocks of the forelegs and sometimes the carpal joints are flexed to varying degrees due to shortening of the deep and superficial digital flexors and associated muscles. A cleft palate may accompany this condition in some breeds. Slightly affected animals bear weight on the soles of the feet and walk on their toes. More severely affected animals walk on the dorsal surface of the pastern and fetlock joint. If not treated, the dorsal surfaces of these joints become damaged, and suppurative arthritis develops. Rupture of the common digital extensor can occur as a sequela. This condition should be differentiated from arthrogryposis.

Mildly affected animals recover without treatment. In moderate cases, oxytetracycline may be administered to relax the flexor muscles, and a splint can be applied to force the animal to bear weight on its toes. The pressure from the splint must not compromise the circulation, or the foot may undergo ischemic necrosis. Frequent manual extension of the joints, attempting to stretch the ligaments, tendons, and muscles, helps treat these intermediate cases. Severe cases require tenotomy of one or both flexor tendons. A bandage cast may sometimes be indicated. Extreme cases may not respond to any treatment.

Dyschondroplasia of genetic origin is seen in most breeds of cattle. The forms range from the so-called Dexter “bulldog” lethal, in which the calf is invariably stillborn, to mildly affected animals.

The brachycephalic dwarfs common in Hereford cattle in the 1950s largely have been eliminated through genetic selection. Short faces, bulging foreheads, prognathism, cleft palate, large abdomens, and short legs are characteristic. They are approximately half normal size.

The dolichocephalic dwarf, most commonly seen in Angus cattle, is of the same general body conformation as the brachycephalic dwarf, except that it has a long head and does not have either a bulging forehead or prognathism. The short-faced calves are frequently referred to as “snorter” dwarfs because of their labored and audible breathing. Both types are of low viability and susceptible to bloat. Their carcasses are undesirable, and they are rarely kept except for research purposes.

Dyschondroplasia of the appendicular and axial skeletons also is seen in dogs. The former is reported in Poodles and Scottish Terriers, the latter in Alaskan Malamutes, Basset Hounds, Dachshunds, Poodles, and Scottish Terriers. In some breeds (Bassets, Dachshunds, Pekingese), the appendicular dyschondroplastic characteristics are an important feature of breed type. In Malamutes, the condition is accompanied by anemia.

Numerous examples of progressive myopathies have been described in animals; many are heritable, and many resemble various types of muscular dystrophy in people. Affected muscles have a variety of degenerative and atrophic changes. In Meuse-Rhine-Yssel cattle of Holland, a progressive fatal myopathy of the diaphragm and intercostal muscles has been described. Another dystrophy in cattle is weaver syndrome in Brown Swiss. Hyperplasia, commonly called double muscling Double Muscling Arthrogryposis in a calf. Arthrogryposis is ankylosis of the limbs, usually combined with a cleft palate and other growth deformities. It is seen in all breeds of cattle, particularly Charolais... read more

, is a congenital myopathy found in some European breeds of cattle. Progressive myopathies have been reported in Merino sheep in Australia (an inherited autosomal recessive), in Pietrain pigs (Pietrain creeper syndrome), and in dogs, cats, chickens, turkeys, and mink. Inherited muscular dystrophy of mice and hamsters has been studied extensively; the hamsters have severe myocardial lesions and serve as a model for studies of cardiomyopathy.

Several types of muscular dystrophy are seen in dogs. An X-linked Duchenne-like muscular dystrophy is reported in Golden Retrievers in the USA and in Irish Terriers in Europe. Affected dogs, generally males, develop progressive muscular weakness, dysphagia, stiffness of gait, and muscular atrophy. Microscopically, the distinctive change is lack of dystrophia, a protein concentrated in the sarcolemma and essential for normal membrane function. Some dogs die with accompanying cardiomyopathy. A similar X-linked dystrophy with a lack of dystrophia is described in cats. A second type of dystrophy involves Labrador Retrievers in North America, Europe, and Australia. Clinical signs, which include stiffness, exercise intolerance, and muscular atrophy, develop by 6 months of age. Autosomal recessive inheritance is implicated. A further dystrophy was described in dysphagic Bouviers in Europe.

Glycogen storage disease (GSD) is the result of defects in the processing of glycogen synthesis or breakdown within muscles, liver, and other cell types. GSD can be genetic or acquired. Genetic GSD is caused by any inborn error of metabolism (genetically defective enzymes) involved in these processes. In livestock, acquired GSD is caused by intoxication with the alkaloid castanospermine. Progressive muscular weakness and inability to rise properly may be seen in animals with GSDs. Five of the 11 types of GSDs characterized in people have been identified in animals (types I, II, III, VII, and VIII).

Myopathy associated with congenital articular rigidity, one of the more common congenital defects of calves, is characterized by rigid fixation of the limbs in abnormal postures; it often produces dystocia. The muscle weakness and imbalance of muscle power around the joints elicits a physiologic compensatory collagenic response, which replaces atrophied muscle fibers with connective tissue and thickens the joint capsule sufficiently to result in prenatal fixation of limb segments at the joint. Affected animals may have other anomalies, including hydrocephalus, palatoschisis, and spinal dysraphism. The condition may be lethal, but some mildly affected animals recover completely. The muscle lesions may be primary in some types of the disease, but the neural lesions generally are primary, and the muscular alterations represent denervation atrophy.

Congenital articular rigidity is seen in cattle, sheep, horses, and pigs. Numerous etiologic factors have been recognized. In cattle, these include viral (Akabane virus Akabane and Related Simbu Serogroup Virus Infections in Ruminants Akabane and related Simbu serogroup viruses are transmitted to ruminants by Culicoides midges. They cause congenital abnormalities of the CNS and musculoskeletal system in ruminants.... read more , bluetongue virus Bluetongue and plant (Lupinus sp Mycotoxic Lupinosis in Animals Lupinosis is a liver disease or hepatotoxicosis caused by ingestion of lupine plants infected with Diaporthe toxica (previously identified as Phomopsis leptostromiformis). Lupinosis... read more teratogens, and a heritable recessive trait in Charolais Arthrogryposis in cattle Arthrogryposis in a calf. Arthrogryposis is ankylosis of the limbs, usually combined with a cleft palate and other growth deformities. It is seen in all breeds of cattle, particularly Charolais... read more

. In sheep, plant (locoweed) and viral (Akabane Akabane and Related Simbu Serogroup Virus Infections in Ruminants Akabane and related Simbu serogroup viruses are transmitted to ruminants by Culicoides midges. They cause congenital abnormalities of the CNS and musculoskeletal system in ruminants.... read more , Wesselsbron Wesselsbron Disease ) teratogens, Rift Valley fever Rift Valley Fever ), parbendazole exposure, and inherited autosomal recessive primary myopathies of Merino and Welsh Mountain lambs may cause congenital articular rigidity. In pigs, the condition may be inherited as an autosomal recessive or result from deficiency of vitamin A or manganese or from exposure of pregnant sows to plant toxins (eg, tobacco, thornapple, hemlock, and black cherry).

Osteochondrosis is a disturbance in endochondral ossification that is sometimes classified as dyschondroplasia. The immature articular cartilage may separate from the underlying epiphyseal bone, which sometimes dissects completely free and floats loose in the synovial cavity, resulting in accompanying synovitis or the retention of pyramidal cores of physeal cartilage projecting into the metaphysis. Often, these two lesions are seen simultaneously in the same bone. The disease develops during maximal growth when the biomechanical stresses are greatest in the immature skeleton (4–8 months in dogs, 80–120 lb [36–54 kg] in pigs).

Osteochondrosis is most common in:

Osteogenesis imperfecta is a generalized, inherited bone defect in cattle, dogs, and cats, characterized by extreme fragility of bones and joint laxity attributable to any of a large number of possible mutations of type I collagen. The mechanical properties of the “soft” part of the collagen/mineral composite in the bone appear to be altered. The long bones are slender and have thin cortices. Calluses and recent fractures may be present. The sclera of the eyes may be bluish. The inheritance is most likely polygenic.

Osteopetrosis is a metabolic bone disease characterized by a systemic increase in skeletal mass. It is a rare disease that appears to be inherited as a simple autosomal recessive trait in Angus, Simmental, Dutch Holstein-Freisian and Hereford cattle. It is also seen in dogs and foals.

Osteopetrosis is characterized by:

Bone marrow cavities are absent and replaced by primary spongiosa. The fetal-like abnormal intramedullary bone consists of chondroosseous tissue. Foramina of the skull and long bones are hypoplastic or aplastic. The cranium is thickened and compresses the brain. Extensive mineralization is present in vessel walls and neurons of the brain. Diagnosis is confirmed by a longitudinal bisection of long bones revealing the diaphyses filled with a plug of bone instead of marrow.

Syndactyly, or mule foot, is the partial or complete fusion of the digits of one or more feet. Reported in numerous cattle breeds, it is most prevalent in Holsteins and is inherited as a simple autosomal recessive condition. The forefeet are affected most often, but one or all four feet may be affected. Animals affected with syndactyly walk slowly, usually have a high-stepping gait and may be more prone to hyperthermia.

Polydactyly is a genetic defect of cattle, sheep, pigs, and occasionally horses. In its most common form, the second digit is developed but the medial dewclaw is missing. The toes may be fused to give rise to polysyndactyly. Rarely one or all four limbs have the condition. Polydactyly in cattle appears to be polygenic, with a dominant gene at one locus and a homozygous recessive at another.

© 2022 Merck & Co., Inc., Rahway, NJ, USA and its affiliates. All rights reserved.
Overview of Congenital and Inherited Anomalies of the Musculoskeletal System