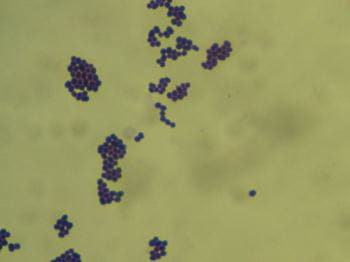 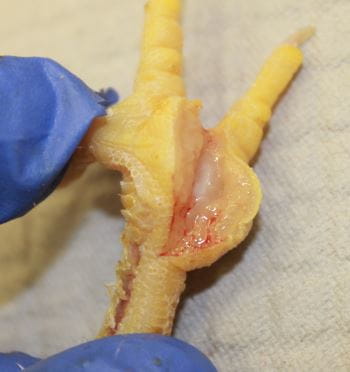 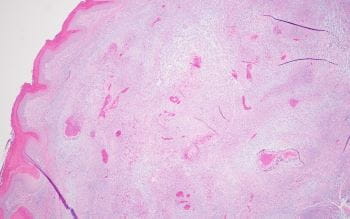 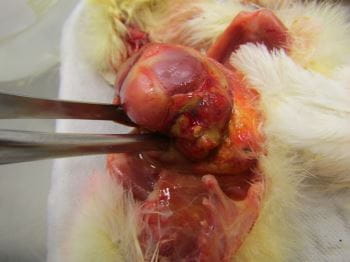 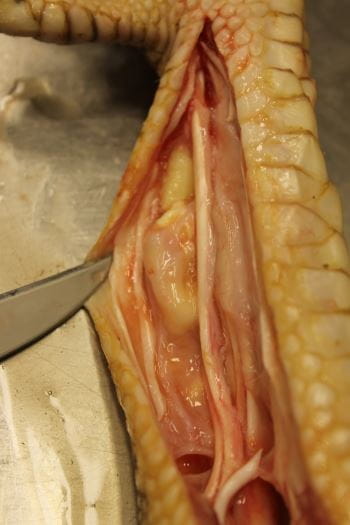 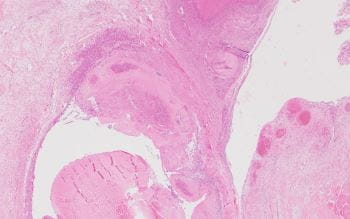 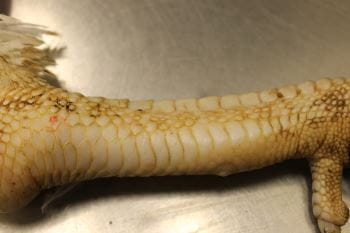 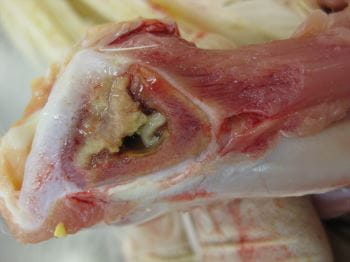 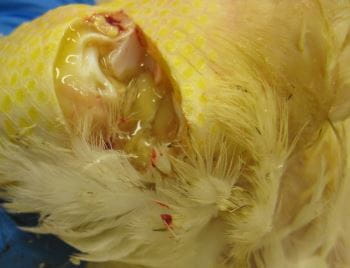 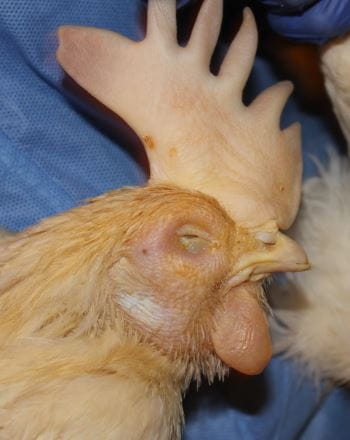 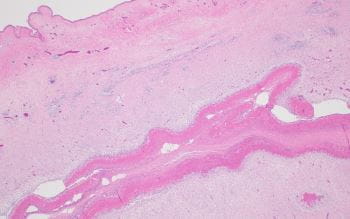 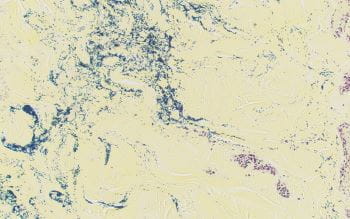 Green liver
Several different normally present Staphylococcus spp can cause localized or systemic infection in poultry if skin or mucous membrane barriers are compromised. Clinical signs vary, depending on the location infected. Diagnosis is confirmed by culture of lesions. Antibiotic treatment of systemic infection is often successful, but localized lesions can be more difficult to treat.

Staphylococcosis is a bacterial disease caused by gram-positive cocci of the genus Staphylococcus. S aureus and other species are ubiquitous in the environment and are part of the normal flora of the skin and other mucous membranes of poultry and other animals. They typically cause disease when they have access to tissue and the bloodstream after physical barriers, such as skin or mucous membranes, break down. They also cause disease in immunocompromised birds.

The genus Staphylococcus contains dozens of species, but S aureus is the most pathogenic. S aureus is a gram-positive, catalase-positive, coccoid bacteria that appears in grape-like clusters on stained smears. Most pathogenic strains have been coagulase-positive; however, coagulase-negative Staphylococcus, including S hyicus, S epidermidis, S simulans, and S gallinarum have been reported from clinical cases.

Skin wounds, minor surgical procedures (ie, beak, toe, or comb trimming), vaccine injection, and compromised intestinal mucosa can introduce Staphylococcus to local tissue or into the bloodstream. Infection can also occur in the hatchery as a result of contamination of an open navel. Once in the bloodstream, Staphylococcus can produce systemic disease or localized lesions in tissues. S aureus can invade the metaphyseal area of joints, leading to arthritis and osteomyelitis.

Bumblefoot (pododermatitis) is more common in heavier birds and in males. Swollen footpads and limping are common clinical signs. It often caused by injuries that allow contamination of the subcutaneous tissue in the footpad. This leads to acute necrotic inflammation, which later develops into a mass of dead tissue. Microscopically, edema, necrosis, and granulomas that may contain bacterial colonies are present in the lesions.

Omphalitis Omphalitis , or infection of the yolk sac, is a common disease caused by S aureus in young chicks and poults. Navel infections can occur in young hatchlings via contamination of open navels and results in elevated mortality. Chicks with omphalitis have moist and dark navels, and affected birds are often lethargic. Infected yolk sacs are retained longer than uninfected yolk sacs, which are normally resorbed by the developing chick within the first week of life. Infected yolks are abnormal in color (dark green to brown), have a doughy consistency, and are odorous.

Arthritis, synovitis, and osteomyelitis are common forms of staphylococcal infection in poultry. They can begin in the joints, tendons, or bone through systemic infection or through local injury. Clinical signs include swollen, hot joints with limping and reluctance to walk. Joints contain increased amounts of fluid, tendons and tendon sheaths are inflamed, and bone sections can contain focal areas of necrosis known as osteomyelitis. The femoral head and the proximal head of the tibiotarsus are commonly affected. Vertebrae can be affected as well, leading to spondylitis.

Research is limited regarding acute septicemic Staphylococcus infections; however, it is reported to occur in laying hens, particularly those older than 85 weeks of age. Clinical signs included sudden death and a sharp increase of mortality, approaching 1% per day, with signs of cutaneous inflammation and necrosis of comb, wattles, and skin overlying the breast and thigh. The dead birds show lesions of acute septicemic infection, including liver necrosis, an enlarged, mottled spleen, and petechial hemorrhages in brains, lungs, and proventricular glands. Typically, mortality subsides after 5–7 days of antimicrobial treatment. Morbidity is not high, but affected birds usually die, leading to 5%–10% mortality.

. Gangrenous dermatitis is often due to a combination of S aureus and Clostridium septicum and/or Escherichia coli. Affected areas are usually hemorrhagic and crepitant. Endocarditis can also occur following systemic staphylococcal infections.

Staphylococcal septicemia can result in green livers or livers with multifocal necrotic granulomas. S aureus has been indicated to be the etiologic agent behind turkey osteomyelitis complex, which causes green discoloration of the liver and inflammatory lesions in the bones, joints, or periarticular soft tissues. Green livers are common in turkeys, leading to increased condemnation in the processing plant. Hemorrhagic enteritis virus Hemorrhagic Enteritis / Marble Spleen Disease in Poultry The hemorrhagic enteritis virus belongs to the family Adenoviridae, genus Siadenovirus, species turkey adenovirus 3 (TAdV3), and it is serologically indistinct from the marble... read more

, another immunosuppressive agent, is thought to contribute to increased green livers in turkeys.

Although some lesions may be suggestive of a Staphylococcus infection, diagnosis is confirmed by identifying the organisms from lesions cultured on blood agar plates. Phenotyping and genetic techniques have been used to classify strains of poultry S aureus. Differential diagnoses include Streptococcus species, E coli, and Pasteurella multocida as well as other bacterial diseases of poultry. As mentioned, Staphylococcus bacteria are ubiquitous in the environment and cause disease as secondary pathogens. So, the mere isolation of Staphylococcus does not necessarily constitute a disease diagnosis. In fact, it is more often that they are contaminants.

Staphylococcosis can be successfully treated with antibiotics, but an antimicrobial susceptibility test should be performed. Antibiotics used to treat Staphylococcus infections include penicillin, erythromycin, lincomycin, and spectinomycin. Proper management to prevent injury and immunocompromised poultry helps prevent staphylococcosis. Because wounds are the primary route by which Staphylococcus can enter the body, it is important to reduce all potential sources of injury to the bird. Wood splinters in litter, protruding wires from cages, and fighting/cannibalism have been associated with skin wounds and staphylococcosis. Because beak and toe trimming procedures in young chickens and turkeys could result in a staphylococcal septicemia, ensuring that equipment is sanitary will help to prevent outbreaks. Good litter management is important in controlling footpad injuries to prevent bumblefoot. Hatchery sanitation and good egg management practices are also important to reduce navel infections and omphalitis.

S aureus can cause food poisoning in people. Enterotoxin-producing strains are found on clinically healthy poultry, and proper precautions should be taken during the handling and cooking Food Processing and Preservation The USA has the safest and most plentiful food supply in the world. These attributes are frequently and mistakenly taken for granted. In truth, however, they are maintained by motivations such... read more

of poultry products. Methicillin-resistant S aureus (MRSA) has been isolated from poultry meat in a number of countries, but the prevalence and significance for human health are incompletely understood.

Streptococcosis in Poultry
Others also read

Role of the Veterinarian in Public Health/One Health