Endometritis negatively impacts fertility, and it has been associated with brucellosis Brucellosis in Large Animals , leptospirosis Leptospirosis , campylobacteriosis Bovine Genital Campylobacteriosis , and trichomoniasis Trichomoniasis . Often, endometritis is the result of nonspecific infections, but it has been associated with calving-related disorders such as abortion, dystocia, retention of fetal membranes, and metritis Metritis in Production Animals In cows, metritis is a common polymicrobial disease, especially within the first 2 weeks after parturition. Acute puerperal metritis refers to a severe postpartum uterine infection that results... read more 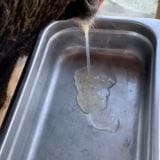 Etiology and Pathogenesis of Endometritis in Cows

The pathogenesis of endometritis in cows is not fully understood, but it is becoming increasingly clear that postpartum uterine diseases, particularly in high-producing dairy cows, are mediated by an impaired immune response, probably related to negative energy balance. In cows, the dominant organism linked to endometritis is Trueperella pyogenes. Cows developing endometritis may delay differentiation between the microbiome of the vagina and the uterus. Opportunistic pathogens from the normal vaginal flora or the environment may invade the uterus from time to time. A cow with adequate immunologic response can eliminate transient infections, but cows with inadequate immunologic status may develop chronic endometritis.

Clinical Signs of Endometritis in Cows

Clinical endometritis in cows is characterized by the presence of purulent (>50% pus) or mucopurulent discharge (approximately 50% pus and 50% mucus) in the vagina after 21 days after parturition without systemic signs. The name clinical endometritis has been questioned. An alternative name suggested is purulent vaginal discharge, because, in some cases, the pus identified in the vagina is from the cervix or vagina, not the uterus.

Subclinical endometritis in cows is characterized by endometrial inflammation of the uterus determined by the presence of a threshold of PMNs on cytologic examination without the presence of purulent material in the vagina.

Diagnosis of Endometritis in Cows

Clinical endometritis in cows can be diagnosed by use of a vaginal discharge collection device or vaginoscopy, or based on purulent discharge in the perineal area. The presence of more than 50% on the sample collected after 21 days after parturition can be used as a criterion to diagnose clinical endometritis.

Treatment of Endometritis in Cows

Cephapirin benzathine (500 mg, intrauterine, once; second treatment may be required in 7–14 days if clinical signs persist) has been shown to improve reproductive performance in cows with endometritis; however, this product not available in the US. All other systemic and intrauterine treatments should be discouraged. The body of evidence from the scientific literature shows that the administration of PGF2-alpha is not effective for the treatment of clinical endometritis or subclinical endometritis.

Prevention of Endometritis in Cows

The control of endometritis includes providing adequate comfort, sanitary, and nutritional management during the transition period to minimize the risk of calving and postpartum health disorders associated with predisposing factors. Some nutraceuticals, such as chromium propionate, have been associated with reduced incidence of endometritis.

Endometritis is a primary cause of infertility in mares, and it is generally caused by nonspecific infections and excessive inflammatory response to semen.

Etiology and Pathogenesis of Endometritis in Horses

In mares, the most common etiologic agent of endometritis is Streptococcus zooepidemicus. Several other organisms may be involved, including Escherichia coli, Pseudomonas aeruginosa, and Klebsiella pneumoniae. Other pathogens associated with the occurrence of endometritis in mares are yeasts and fungi, particularly in mares with reduced resistance, or as a sequela of exuberant antimicrobial therapy. Some mares appear particularly susceptible to postbreeding endometritis. These mares accumulate fluid in the uterine lumen after mating or insemination. In contrast, healthy mares have a vigorous but transient inflammatory response to mating, and the uterus rapidly regains the noninflamed status.

Clinical Signs and Diagnosis of Endometritis in Horses

Visible exudate is rarely a feature of endometritis in mares. Endometrial inflammation is best confirmed by examination of endometrial cytologic or histologic evaluation. Ultrasonographic imaging of intraluminal free fluid, especially during diestrus, and isolation of potentially pathogenic bacteria from appropriately guarded swabs are additional diagnostic techniques. Because most causative organisms are common commensals, isolation of bacteria alone is not sufficient evidence for diagnosis. Nevertheless, evidence suggests that the fertility of mares is impaired if results of endometrial cytologic evaluation or culture are positive.

Treatment of Endometritis in Horses

In sows, a form of endometritis characterized by profuse vaginal discharge at the onset of estrus has been described in Europe and other regions. The causative agent is usually Staphylococcus hyicus or E coli, and the disease seems to be transmitted at mating or artificial insemination.

Clinical Findings of Endometritis in Pigs

Endometritis in sows is characterized by profuse purulent discharge 15–25 days after infection, during the subsequent proestrus or estrus. Infection may be of long duration, with signs recurring at each estrus.

Treatment of Endometritis in Pigs

Some sows recover from endometritis spontaneously, but there does not seem to be an effective treatment for those that do not. At necropsy, copious quantities of purulent exudate may be found in the uterus, making this condition more akin to pyometra Pyometra in Production Animals Pyometra is characterized by the accumulation of purulent or mucopurulent exudate in the uterus. In cows, it is invariably accompanied by the persistence of an active corpus luteum and interruption... read more

Endometritis occurs in sheep, goats, and camelids. In commercial sheep and goat flocks, antemortem diagnosis is rare and treatment is generally impractical. In animals with a persistent uterine discharge, remnants of a macerated fetus should be considered as a nidus of chronic infection. In goats, chronic metritis or endometritis may occur after parturition or during the breeding season. Affected goats usually eat and are afebrile but have a whitish vaginal discharge. Chronic infections may be the result of postpartum metritis or the result of bacterial contamination during breeding. Systemic antimicrobials and prostaglandin are the treatments of choice in these cases. Endometritis in camelids is usually treated empirically based on treatments for cattle and horses.