Uterine Prolapse and Eversion in Animals 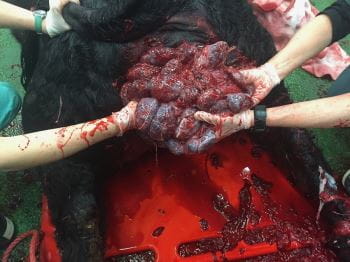 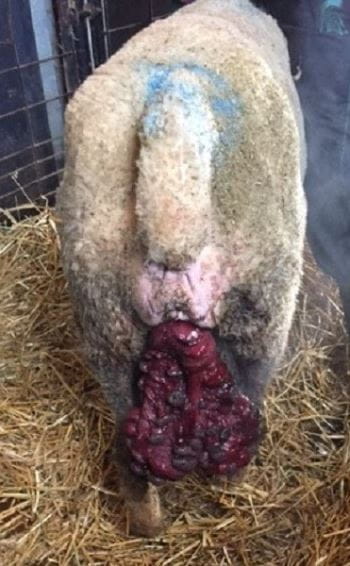 Prolapse of the uterus may occur in any species; however, it is most common in dairy and beef cows and ewes and less frequent in sows. Uterine prolapse is rare in mares, bitches, queens, and rabbits. Invagination of the tip of the uterus, excessive traction to relieve dystocia or retained fetal membranes, uterine atony, hypocalcemia, and lack of exercise have all been incriminated as contributory causes. In sheep, grazing estrogenic pastures may also be a contributing factor.

Prolapse of the uterus occurs immediately after or within several hours of parturition, when the cervix is open and the uterus lacks tone. Prolapse of the complete post-gravid uterine horn is most common in affected cows, and the mass of uterus may hang below the tarsi. The invagination of the contralateral horn, which is prevented from prolapse by the strong intercornual ligament, can be located by careful examination of the surface of the prolapsed organ. In sows, one horn may become everted while unborn piglets in the other prevent further prolapse. In small animals, complete prolapse of both uterine horns is usual. Uterine prolapse is a true emergency, and prompt treatment is required to preserve the life and future reproductive potential of the affected animal.

In cows, treatment involves removing the placenta (if still attached), thoroughly cleaning the endometrial surface, and surgically repairing any lacerations. Applying sugar to the surface of the uterus or rinsing with hypertonic saline can help to reduce edema and aid reduction of the prolapse. An epidural anesthetic should be administered before attempting to return the uterus to its normal position.

If the cow is standing, the cleansed uterus should be elevated to the level of the vulva on a tray or hammock supported by assistants. If recumbent, the patient should be positioned sternally, with the hind limbs extended caudally so that the cow is resting on its stifles. This position tilts the pelvis cranially and ventrally to aid in the replacement of the uterus. When elevating the cow's hindquarters to extend the hindlimbs caudally, care should be taken to lift the prolapsed uterus with the hindquarters to prevent stretching and laceration of the uterine artery. Reduction of the prolapse is achieved by applying steady pressure beginning at the cervical portion (or at the level of the invagination of the non-prolapsed uterine horn) and gradually working toward the apex. A closed fist or palm (rather than fingertips) should be used to apply pressure to avoid perforating the uterus.

Once the uterus is replaced, a hand should be inserted to the tip of both uterine horns to ensure there is no remaining invagination that could incite abdominal straining and another prolapse. Installation of warm, sterile saline solution is useful to ensure complete replacement of the tip of the uterine horn without trauma.

Replacement of the prolapsed uterus in mares is done in a similar way, usually with the mare sedated but standing, taking care not to perforate the uterus.

In sows and small animals, the uterus may be repositioned by simultaneously manipulating the prolapsed tissue from outside with one hand and via an abdominal incision (laparotomy) with the other. Resection of the uterus is indicated in chronic cases in which tissue necrosis has occurred. Once the uterus is in its normal position, oxytocin (up to 5 IU, IV, or up to 20 IU depending on species, IM) is administered to increase uterine tone. Administration of calcium-containing solutions IV is indicated in cases in which hypocalcemia is a contributing factor, and also as a means of increasing uterine tone.

The use of Caslick or other forms of vulvar retention sutures are controversial and may not be useful, because the uterine prolapse begins at the apex of the uterine horn. However, many clinicians still use vulvar sutures such as a Buhner stitch or shoelace suture, particularly in cattle Vaginal and Cervical Prolapse in Cattle and Sheep Prolapsed caudal vaginal mucosa in a ewe at late gestation. Rectal prolapse is also present in this animal due to persistent straining. Grade I vaginal prolapse in a dairy cow at late gestation... read more

. Prevention of recurrence depends on complete and correct replacement of the uterus and restoration of uterine tone.

Complications tend to develop when laceration, necrosis, and infection occur; or when treatment is delayed. Shock, hemorrhage, and thromboembolism are potential sequelae of a prolonged prolapse. Uterine artery rupture due to excessive stretching of the vessel by the weight of the prolapsed uterus may result in sudden death. In some instances, the bladder and intestines may prolapse into the everted uterus. These require careful replacement before the uterus is replaced. The bladder may be drained with a catheter or needle passed through the uterine wall. Elevation of the hindquarters and pressure on the uterus aid in replacement of bladder and intestines. It may be necessary to incise the uterus carefully (in a longitudinal direction) to replace these organs. In cows, amputation of a severely traumatized or necrotic uterus may be the only way to save the animal. Supportive treatment, antimicrobial therapy, and anti-inflammatories are indicated.

Prognosis depends on the amount of injury and contamination of the uterus. The prognosis is favorable when a clean, minimally traumatized uterus is promptly replaced. Although there is no tendency for the condition to recur at subsequent parturitions, uterine prolapse in cows has been associated with an increased risk of reproductive failure during the subsequent breeding season.

© 2022 Shared.Copyright
Traumatic and Structural Disorders of the Udder

Vaginal and Cervical Prolapse in Cattle and Sheep
Others also read

Vaginal and Cervical Prolapse in Cattle and Sheep

Overview of Management and Nutrition in Animals

Overview of Fatigue and Exercise in Animals