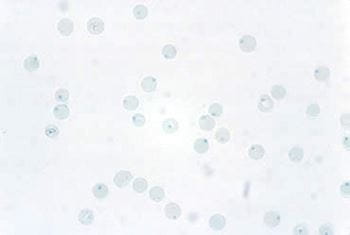 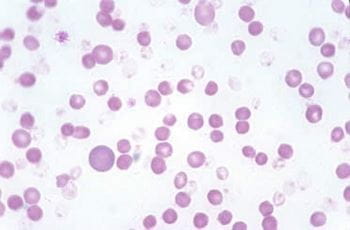 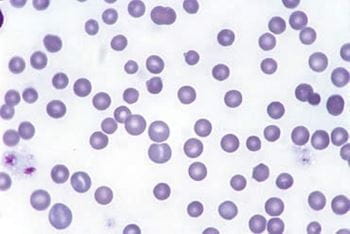 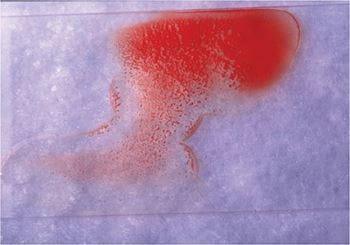 Assessment of Regeneration in Anemia

Infectious Causes of Anemia
Anemia is an absolute decrease in RBC numbers, hemoglobin concentration, or PCV. Signs include pale mucous membranes, increased heart rate, and hypotension. Diagnosis can be made by CBC, but may be refined by additional tests. Treatment can be symptomatic, but often requires addressing the underlying cause.
Table

Anemia is defined as an absolute decrease in the red cell mass as measured by RBC count, hemoglobin concentration, and/or PCV. It can develop from loss, destruction, or lack of production of RBCs. Anemia is classified as regenerative or nonregenerative (see Table: Assessment of Regeneration in Anemia Assessment of Regeneration in Anemia Anemia is an absolute decrease in RBC numbers, hemoglobin concentration, or PCV. Signs include pale mucous membranes, increased heart rate, and hypotension. Diagnosis can be made by CBC, but... read more

Clinical signs in anemic animals depend on the degree of anemia, the duration (acute or chronic), and the underlying cause. Acute anemia can result in shock and even death if more than a third of the blood volume is lost rapidly and not replaced. In acute blood loss, the animal usually presents with one or more of the following:

The cause of the blood loss may be overt, eg, trauma. If no evidence of external bleeding is found, a source of internal or occult blood loss must be sought, eg, a ruptured splenic tumor, other neoplasia, coagulopathy, GI ulceration, or parasites. If hemolysis is present, the animal may be icteric.

Animals with chronic anemia have had time to accommodate, and their clinical presentation is usually more indolent with vague signs such as:

These animals may have similar physical examination findings such as pale mucous membranes and weak peripheral pulses. The lack of expected clinical signs may alert the clinician to the time frame involved. Splenomegaly, abdominal distention, and/or heart murmur may be present, depending on the underlying cause of anemia.

A complete history is an important part of the evaluation of an anemic animal. Questions might include duration of clinical signs, history of exposure to toxins (eg, rodenticides, heavy metals, toxic plants), drug treatments, vaccinations, travel history, and any prior illnesses.

A CBC, including a platelet and a reticulocyte count, will provide information on the severity of anemia and degree of bone marrow response and also allow for evaluation of other cell lines. A blood smear should be evaluated for abnormalities in RBC morphology or size and for RBC parasites. The RBC indices (measures of size and hemoglobin concentration) are calculated by automated cell counters calibrated for the species in question. RBC size is expressed by the mean corpuscular volume (MCV) in femtoliters and can reflect the degree of regeneration. Macrocytosis (an increase in the MCV) usually correlates with a regenerative anemia (see Table: Assessment of Regeneration in Anemia Assessment of Regeneration in Anemia Anemia is an absolute decrease in RBC numbers, hemoglobin concentration, or PCV. Signs include pale mucous membranes, increased heart rate, and hypotension. Diagnosis can be made by CBC, but... read more

). Macrocytosis can be a heritable condition in Poodles without anemia and may be seen in anemic cats infected with feline leukemia virus. Microcytosis (a decrease in the MCV) is the hallmark of iron-deficiency anemia and can also be heritable in Akitas.

The hemoglobin concentration of each RBC, measured in g/dL, is defined as the mean corpuscular hemoglobin concentration (MCHC). Terms used for description of abnormalities with MCHC include normochromia and hypochromia. Abnormalities in RBC morphology, such as basophilic stippling, can indicate lead intoxication. Heinz body formation indicates oxidative injury to the RBCs, secondary to toxin exposure (see Table: Toxic Causes of Anemia Toxic Causes of Anemia Anemia is an absolute decrease in RBC numbers, hemoglobin concentration, or PCV. Signs include pale mucous membranes, increased heart rate, and hypotension. Diagnosis can be made by CBC, but... read more

). Cats are more susceptible to Heinz body formation than other species, and cats without anemia can have a small number of Heinz bodies. The presence of schistocytes or spherocytes may also help identify the pathophysiology associated with the cause of anemia (eg, spherocytes are seen with immune-mediated hemolytic anemia).

The reticulocyte count is usually reported as a percent of the RBC mass. This value should be corrected for the degree of anemia to evaluate the degree of regeneration. An absolute reticulocyte count (measured by RBCs/μL × reticulocyte percentage) of >50,000/mcL in cats or >60,000/mcL in dogs is considered regenerative. To correct the percent reticulocytes, the formula (see below) can be applied. A corrected reticulocyte percent >1% indicates regeneration in dogs and cats (see Table: Assessment of Regeneration in Anemia Assessment of Regeneration in Anemia Anemia is an absolute decrease in RBC numbers, hemoglobin concentration, or PCV. Signs include pale mucous membranes, increased heart rate, and hypotension. Diagnosis can be made by CBC, but... read more

Plasma protein is also useful for further classifying the cause of anemia. Plasma protein will often be low with blood loss, normal (or elevated) in cases of hemolysis and decreased production.

A serum chemistry panel and urinalysis evaluate organ function. If GI blood loss is suspected, an elevation in BUN may be noted or an examination of the feces for occult blood and parasites can be useful. Radiographs can help identify occult disease, such as a penny (zinc toxicity) in the stomach of a puppy with hemolytic anemia. Bruising or bleeding may be signs of a coagulopathy and indicate the need for a coagulation profile. Presence of petechiae or ecchymotic hemorrhage suggest significant thrombocytopenia or thrombocytopathy. If hemolytic disease is suspected, blood can be evaluated for autoagglutination, or a direct Coombs’ test might be indicated. A test for autoagglutination can be done by placing a drop of saline on a slide with a fresh drop of the animal's blood; the slide should be gently rotated to mix the drops together, then evaluated grossly and microscopically for macro- and microagglutination. If autoagglutination is present, there is no need to perform a Coombs' test. Serology or PCR for infectious agents such as feline leukemia virus, Ehrlichia, equine infectious anemia virus, and Babesia may also help define the cause of anemia (see Table: Infectious Causes of Anemia Infectious Causes of Anemia Anemia is an absolute decrease in RBC numbers, hemoglobin concentration, or PCV. Signs include pale mucous membranes, increased heart rate, and hypotension. Diagnosis can be made by CBC, but... read more

Bone marrow evaluation by aspiration and/or biopsy Bone Marrow Aspiration and Biopsy Primary bone marrow disease or failure from any cause can lead to nonregenerative anemia and pancytopenia. With diffuse marrow involvement, granulocytes are affected first, followed by platelets... read more

is indicated in any animal with an unexplained, nonregenerative anemia. If the CBC reveals a decrease in more than one cell line, possibly indicating hypoplastic marrow, a biopsy would be indicated along with an aspirate. Biopsies and aspirates are complementary: biopsies are better to evaluate the architecture and degree of cellularity of the marrow, and aspirates allow for better evaluation of cellular morphology. Aspirates also allow for an evaluation of orderly maturation of the red and white blood cell lines, the ratio of myeloid to erythroid precursors (M:E ratio), and the number of platelet precursors. Iron stores can also be evaluated by Prussian blue staining. An M:E ratio of <1 indicates that red cell production is greater than white cell production; with an M:E ratio >1, the opposite is likely. The M:E ratio is always interpreted in light of a recent CBC, because changes in the ratio could also be due to suppression of one cell line compared with the other.