Interactions Between Health and Production in Dairy Cattle

An important factor that influences dairy herd productivity is the type and incidence of disease in the herd. The basis of disease control programs includes knowledge of the frequency and biologic effect of disease, and information on the effectiveness of control procedures.

Most studies only report incidence rates of common, easily diagnosed clinical diseases such as mastitis, lameness, milk fever, retained placenta, or displaced abomasum. The frequency of subclinical disease is much more difficult to discern. The cost to obtain subclinical disease information is inflated by the need to use screening tests (eg, culture or somatic cell counts [SCC] for mastitis Mastitis in Cattle With few exceptions, mastitis occurs when microbes enter the teat via the teat canal. Almost any microbe can opportunistically invade the teat canal and cause mastitis. However, most infections... read more

) for diagnosis. However, the high cost of subclinical diseases such as mastitis or paratuberculosis may justify the considerable expense of a control program, and veterinarians can play a vital role in designing these programs. There is zero tolerance for some diseases that have serious consequences for public health. The diagnosis of even one case of bovine spongiform encephalopathy Bovine Spongiform Encephalopathy Bovine spongiform encephalopathy (BSE) is a progressive, fatal, infectious neurologic disease that is due to the accumulation of misfolded proteins, termed prions, in the central nervous system... read more

, brucellosis Brucellosis in Cattle The disease in cattle, water buffalo, and bison is caused almost exclusively by Brucella abortus; however, B suis occasionally is isolated from seropositive cows but does not appear... read more , rabies Rabies Rabies is an acute, progressive encephalomyelitis caused by lyssaviruses. It occurs worldwide in mammals, with dogs, bats, and wild carnivores the principle reservoirs. Typical signs include... read more , or tuberculosis Tuberculosis in Cattle Most of the general discussion above applies to bovine TB. The introduction of milk pasteurization was a major step in the fight against Mycobacterium bovis TB and continues to be an... read more in areas thought to be free of those conditions is cause for immediate action.

Influence of Disease on Productivity

Increased culling, reduced milk or protein yield, increased adult cow mortality, and reduced reproductive efficiency are all potential results of disease in adult cows. Milk production is often profoundly reduced in cows with clinical disease. The duration of acute clinical disease is often short, but the effects of the disease may persist throughout the entire lactation. Early lactation is the highest risk period for many diseases. Disease during early lactation may reduce peak milk yields and therefore contribute to lower total lactational yields. Through advances in animal husbandry and health management programs, in concert with close involvement of veterinarians, many farms have minimized clinical syndromes associated with infectious and metabolic disease. The trend toward larger units and shrinking profit margins has encouraged a shift toward optimizing herd or group productivity through reduction of subclinical diseases such as ketosis Ketosis in Cattle Ketosis is an elevated concentration of ketone bodies (acetone, acetoacetate, beta-hydroxybutyrate) in all body fluids. Key clinical signs of ketosis are vague but include anorexia, decreased... read more 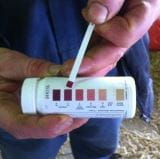 , mastitis Mastitis in Cattle With few exceptions, mastitis occurs when microbes enter the teat via the teat canal. Almost any microbe can opportunistically invade the teat canal and cause mastitis. However, most infections... read more

, acidosis Subacute Ruminal Acidosis in Cattle and Sheep Subacute ruminal acidosis is characterized by intermittent, self-correcting periods of low ruminal pH. Affected cows do not show clinical signs when ruminal pH is depressed. However, sequelae... read more , and laminitis Laminitis in Cattle Equine and bovine laminitis are distinctly different. Although acute laminitis occurs in both species and can be caused by grain overload, other etiologies can affect the equine laminae. A major... read more , which can have a major impact on productivity.

Infectious disease still represents a major source of loss to dairy industries worldwide. In Britain, outbreaks of foot and mouth disease Foot-and-Mouth Disease in Animals Foot-and-mouth disease is one of the world's most economically important viral diseases of livestock. The virus infects cattle, pigs, and sheep and many cloven-hoofed wildlife species. The infection... read more

) are dramatic examples of the disastrous effects of infectious diseases on productivity. Other serious infectious diseases such as tuberculosis Tuberculosis in Cattle Most of the general discussion above applies to bovine TB. The introduction of milk pasteurization was a major step in the fight against Mycobacterium bovis TB and continues to be an... read more , brucellosis Brucellosis in Cattle The disease in cattle, water buffalo, and bison is caused almost exclusively by Brucella abortus; however, B suis occasionally is isolated from seropositive cows but does not appear... read more , bluetongue Bluetongue in Ruminants Bluetongue is a viral disease of ruminants worldwide. Clinical signs in sheep result from vascular endothelial damage, including edema of the muzzle, tongue, and coronary bands. Diagnosis is... read more , and vesicular stomatitis Vesicular Stomatitis in Large Animals Vesicular stomatitis (VS) is a viral disease of livestock transmitted primarily by biting flies and midges. The disease results in characteristic vesicular lesions that can occur on the muzzle... read more continue to affect livestock around the world. In North America, more common infectious diseases that must be actively controlled include the contagious mastitis pathogens Mycoplasma bovis, Staphylococcus aureus, and Streptococcus agalactiae; bovine viral diarrhea Bovine Viral Diarrhea and Mucosal Disease Complex Bovine viral diarrhea/mucosal disease is a pestivirus infection of cattle and other ruminants. Infection leads to immunosuppression and can cause signs in multiple body systems in addition to... read more ; salmonellosis Salmonellosis in Animals Salmonellosis is infection with Salmonella spp bacteria. It affects most animal species as well as humans and is a major public health concern. The clinical presentation can range from... read more

; and pneumonia Bacterial Pneumonia in Cattle with Bovine Respiratory Disease Complex Mannheimia haemolytica serotype 1 is the bacterial pathogen most frequently isolated from the lungs of recently weaned feedlot cattle with bovine respiratory disease (BRD) and in dairy... read more

. Excellent control programs have been developed for most of these diseases, but their adoption is quite variable.

The effects of disease on productivity can be direct (such as mastitis causing a profound reduction in milk yield) or indirect (lameness leading to reduced feed intake, thus causing reduced milk yield). Diseases occurring in early lactation can also cause cascading effects that ultimately reduce productivity over the entire lactation. For example, periparturient disorders often are seen as a complex, and cows diagnosed with parturient paresis are at increased risk of retained placenta, complicated ketosis, and mastitis. Cows with dystocia and retained placenta are at increased risk of metritis. Subclinical ketosis Ketosis in Cattle Ketosis is an elevated concentration of ketone bodies (acetone, acetoacetate, beta-hydroxybutyrate) in all body fluids. Key clinical signs of ketosis are vague but include anorexia, decreased... read more

leads to increased risk of displaced abomasum and reduced milk production. The best documented direct effect is the effect of mastitis on milk yield. A single case of clinical mastitis can result in a milk yield loss of 300–400 kg/lactation, with variations ranging from negligible to 1,050 kg. Mastitis Mastitis in Cattle With few exceptions, mastitis occurs when microbes enter the teat via the teat canal. Almost any microbe can opportunistically invade the teat canal and cause mastitis. However, most infections... read more

during early lactation is associated with higher losses (450–550 kg) than cases seen later in lactation.

Diseases that delay or inhibit conception have a negative effect on herd productivity by prolonging the time cows spend in lower-producing stages of lactation, by reducing the number of offspring for replacements or for sale, and by increasing the likelihood the animal will be culled prematurely. Several diseases have been associated with decreased conception rates. The likelihood of conception was reduced by 14%, 15%, and 21% for cows that experienced retained placenta, metritis, or ovarian cysts, respectively. Mastitis, metritis, and ovarian cysts reduced the likelihood of cattle being bred for the first time. Postpartum diseases that prolong negative energy balance in early lactation also have a negative effect on reproductive performance through alterations in hormonal levels.

The effect of disease on longevity has been investigated. A large proportion of cow culling is considered involuntary (driven by disease, injury, or death) rather than for reasons of low production. The premature removal of a cow from the herd reduces lifetime milk yield. Reproductive failure and mastitis are consistently recorded as the top two reasons for culling.